Behind every business that has stood the test of time lies a treasure trove of stories that we don’t often think of when we drop by our neighbourhood tau sar piah shop, or dabao our favourite chicken rice – the struggle of setting up shop; challenges that had to be overcome along the way; or customers who have grown to become friends over the years. These tales will now come into the spotlight through the National Heritage Board’s (NHB) Balestier Street Corner Heritage – the first of their Street Corner Heritage Galleries scheme. 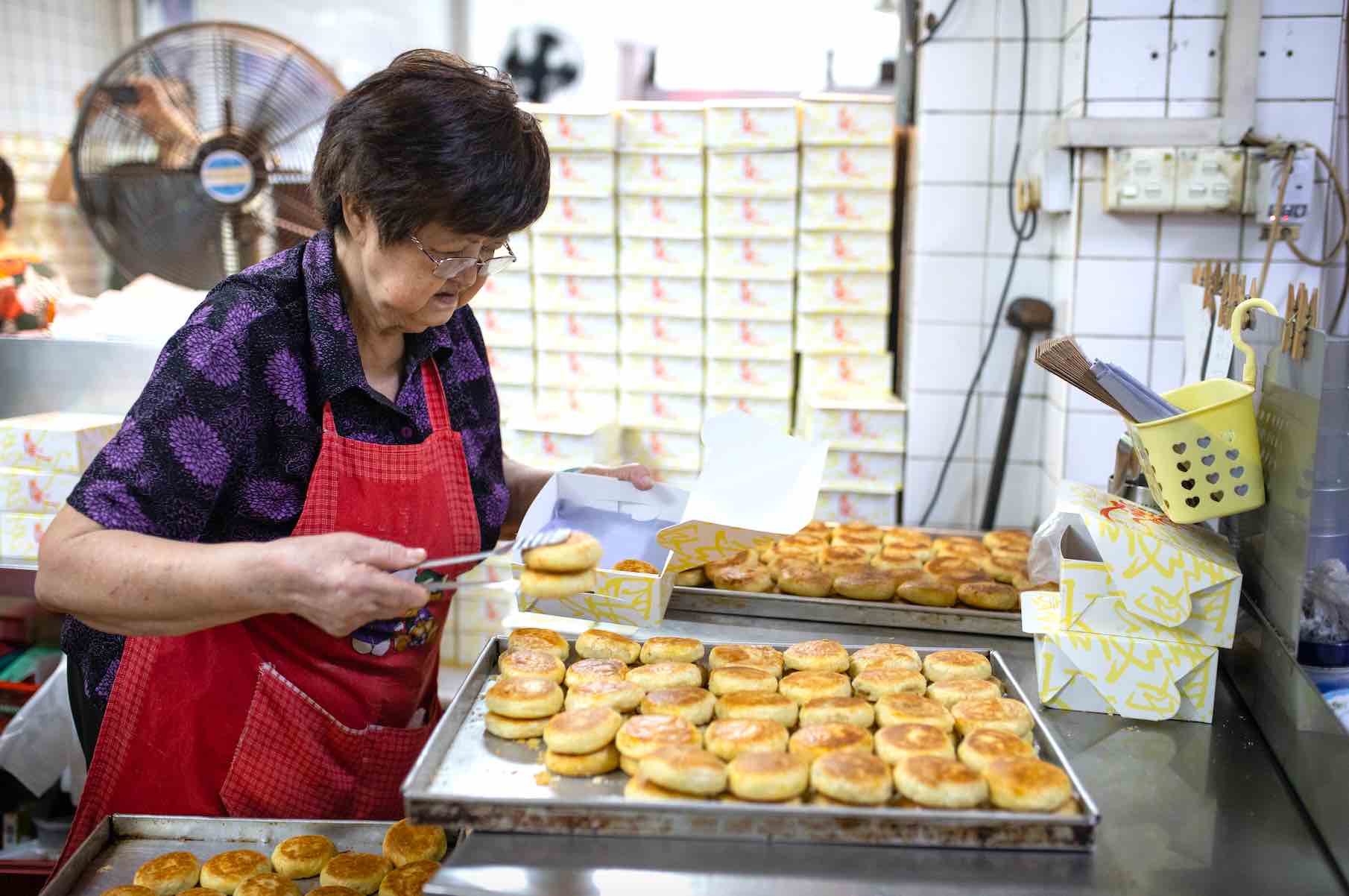 As part of its ongoing efforts under Our SG Heritage Plan to strengthen partnerships with communities, and raise awareness of and foster deeper appreciation for heritage in everyday spaces, NHB will work closely with local shop owners with at least 30 years of history in selected precincts to co-create “mini museums” that showcase the history and heritage of their respective businesses and trades. Located on site, these galleries will display historical documents, photographs and artefacts that tell the stories of these shops.

The scheme seeks to identify existing heritage resources and perform ‘urban acupuncture’ by introducing small-scale interventions to showcase these resources and in the process, revitalise the precinct through street-level heritage. A participatory approach was adopted to instil a stronger sense of ownership and to equip our precinct stakeholders with the necessary competencies in heritage programming so as to grow the heritage ecosystem.”

The scheme involves collaboration between NHB museums, heritage institutions and community galleries, and the Street Corner Heritage Galleries managed by local shop owners in historic precincts. On top of providing funding, curatorial support and assistance in fabricating the showcases, NHB will also work with local shop owners to develop programmes such as talks, tours and workshops, and give them the opportunity to participate in key NHB events such as the Singapore Heritage Festival and the respective CultureFests of the heritage institutions in their precincts.

For more than 25 years, people have flocked to this corner shop to dine on succulent chicken and fragrant rice, spiced with hand-ground ginger and a homemade garlic-chilli dip. However, few may be aware that Loy Kee has been selling traditional Hainanese chicken rice in the Balestier area since 1953. 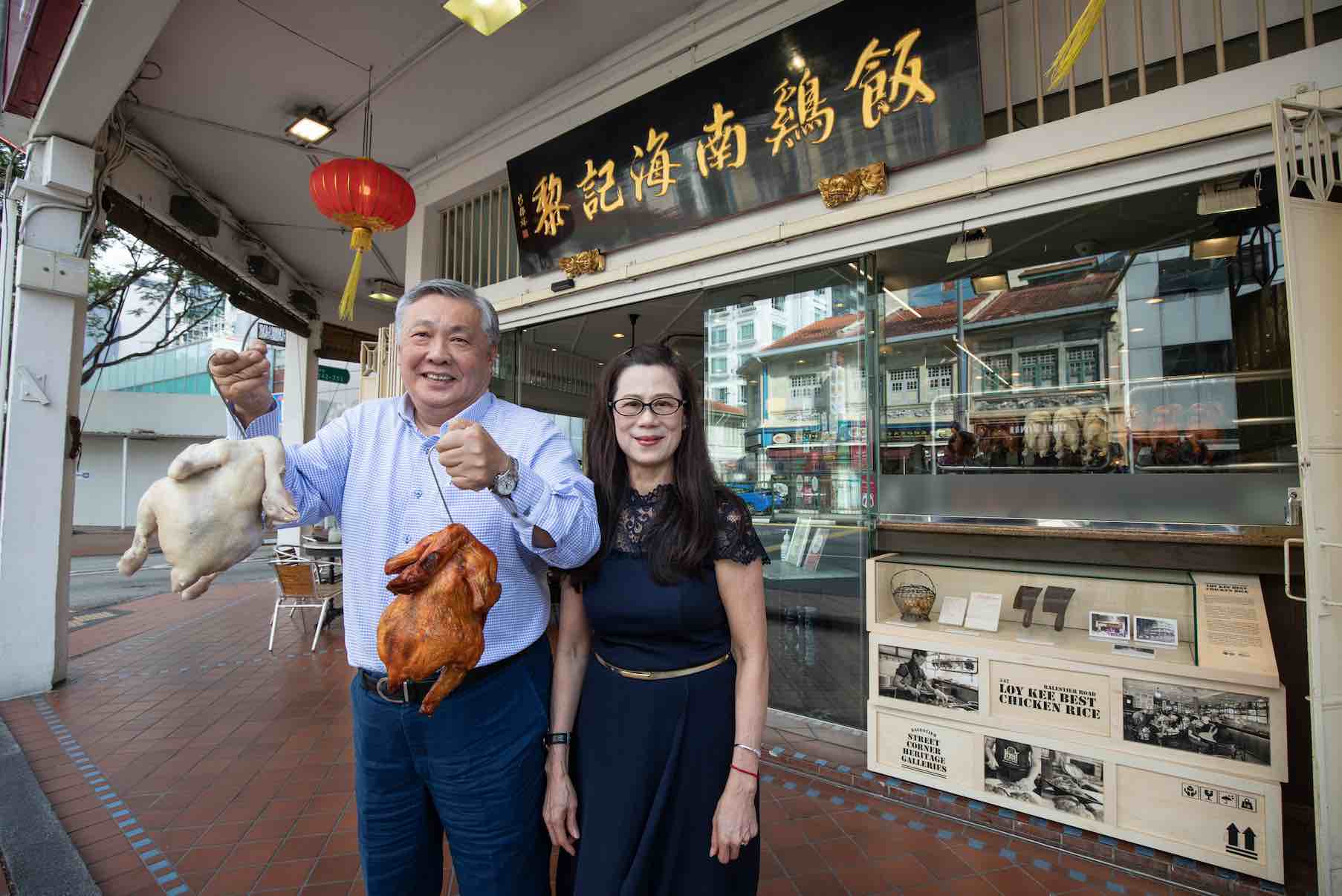 Business was good but it was backbreaking work for the Loy family. James Loy, the Loys’ youngest son, recalled that his parents would often sleepover in the market stall as they needed to boil porridge and prepare chicken for residents wanting a hearty breakfast early in the morning. The Loys continued to do well in the 1970s when Rayman Estate was redeveloped into a Housing & Development Board estate.

The Loys worked at their stall until 1994, when they moved to this former kopitiam, which their younger son James had taken over and converted into Loy Kee Best Chicken Rice. Today, their elder son Sai Hong runs the original stall at Whampoa Makan Place, while James runs this shop with his family. In 2006, the elder Loys finally retired, after having served well-loved chicken rice for 53 years. 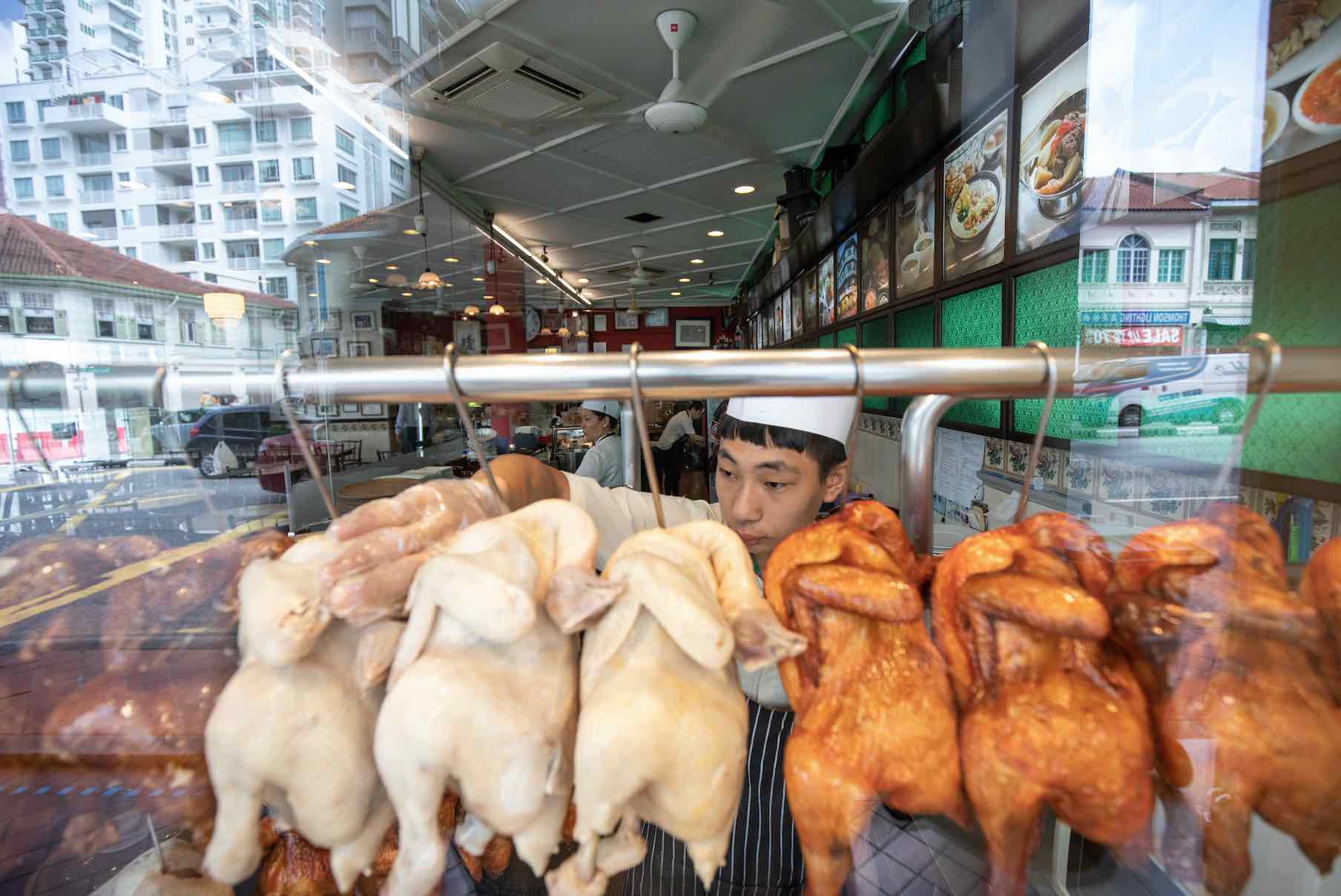 2. From Toast to Tradition – Sweetlands Confectionery and Bakery

In the 1970s, there were nearly 200 traditional bakeries all over Singapore but today, less than 10 such bakeries remain. Sweetlands Confectionery and Bakery, which first opened in the 1960s, is one such bakery. It was originally known as Kim Keat Bakery, and supplied loaves to kopitiams (coffee shops) along Balestier Road and beyond.

When the original owners retired in 2001, the bakery was taken over by Ng Yek Heng (b. 1956), who renamed it Sweetlands. Under Ng’s management, the bakery expanded its clientele to include new food courts and modern cafés. The bakery produces an estimated 1,200 pieces of bread, including traditional loaves, baguettes and buns, daily.

The shop floor of the bakery is a hive of activity. The bakers must knead the dough thoroughly so that the flour and yeast are evenly distributed. Before baking, they grease the baking pans properly to ensure that the dough does not stick to the pans. They then place the pans into a large rotating diesel oven, and carefully slice off the brown “skin” (hard crust) of each loaf after it emerges from the oven.

Today, Sweetlands Confectionery and Bakery is in the hands of a third owner, who took over the business following Ng’s retirement. Packaged sliced bread manufactured in large factories may dominate the market today but Sweetlands’ ability to sustain itself is proof indeed that people still enjoy their kaya toast made the traditional way. 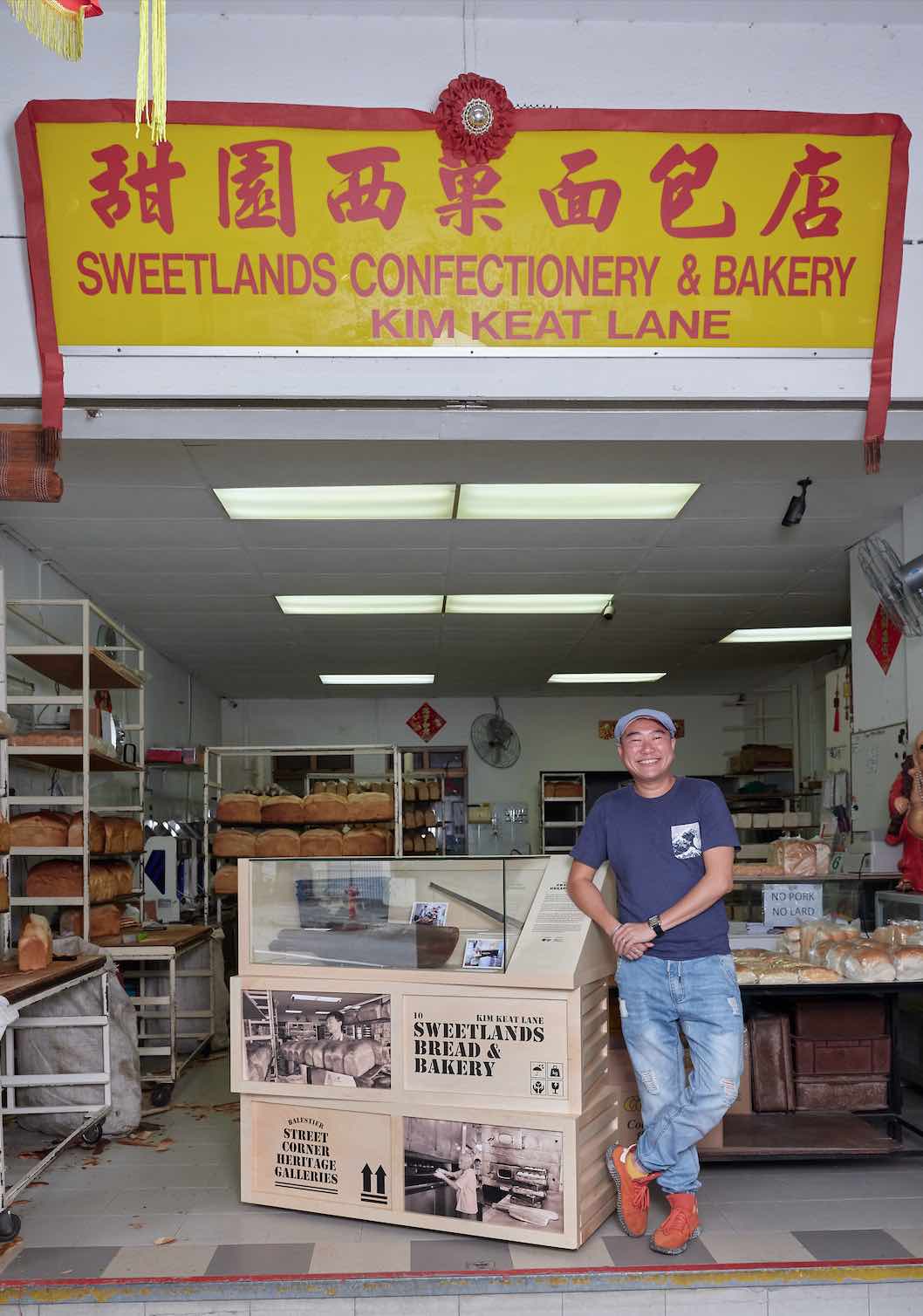 There is always a long queue at Loong Fatt as people line up for its signature tau sar piah, a traditional flaky pastry filled with mung bean (also known as green bean) paste. However, this landmark shop, which is said to be the oldest surviving traditional kopitiam (coffee shop) at Balestier Road, had its beginnings as a Western-style bakery in 1948. 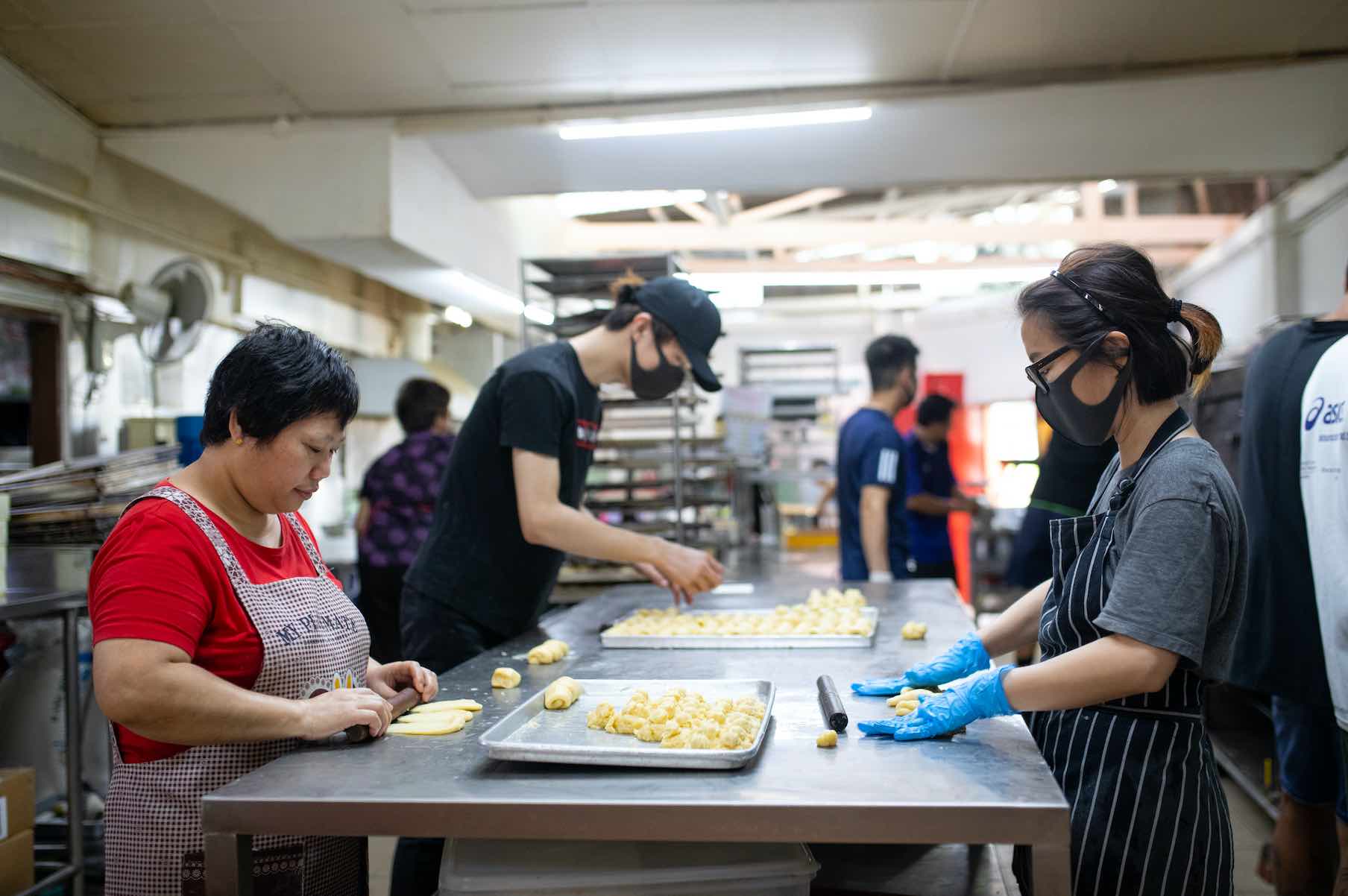 Today, Lee’s family continues to run Loong Fatt, where a team of bakers prepare 3,000- 4,000 tau sar piah every day. The exact recipe is a secret, but according to Mdm Loo Suan Mui, who has worked at Loong Fatt since the 1970s, high-quality flour and butter are used to produce a crispier crust, which differs from the softer crust of tau sar piah made in the traditional Teochew style. Loong Fatt’s bakers also carefully control the temperature of their gas-fired ovens to obtain a rich, buttery flavour. 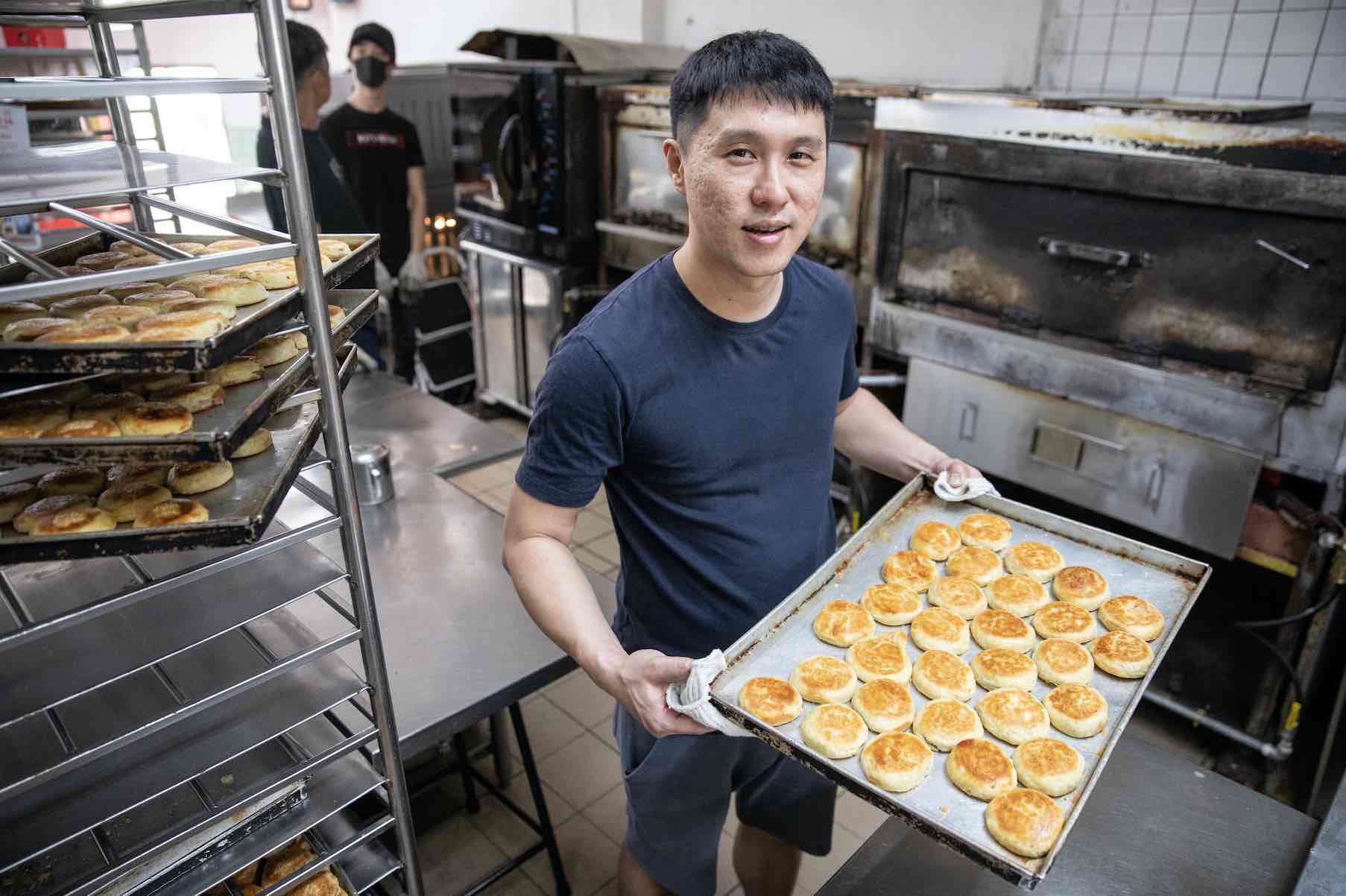 The shop has been renovated a few times over the years, but its original green and white wall tiles as well as some of the wooden benches and tables have been retained. Tradition, it seems, is never out of style at Loong Fatt, which still draws in the crowds who come for a hearty meal and often leave with a box or more of tau sar piah fresh from its ovens. 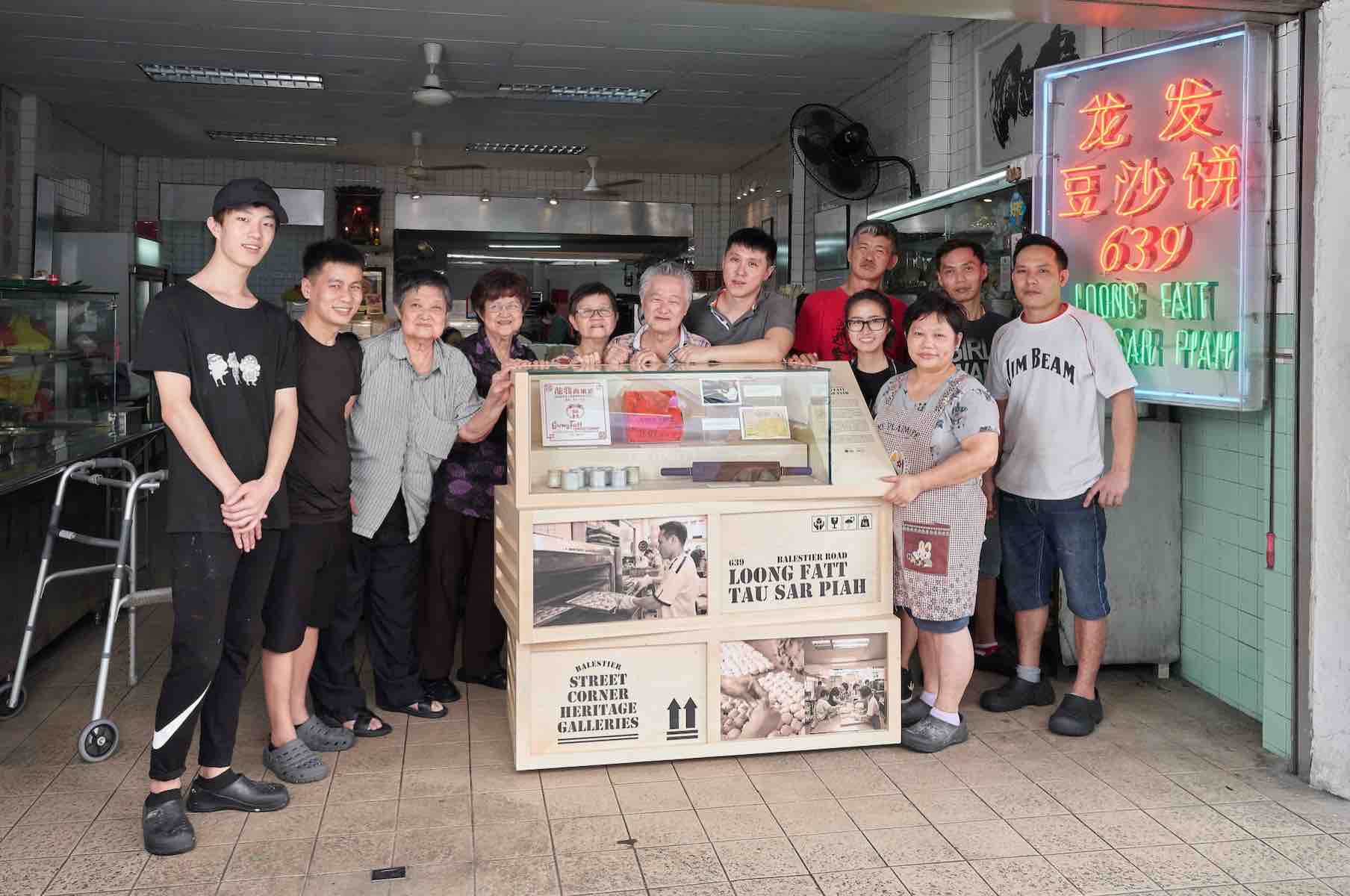 4. Peek into the Past – Lim Kay Khee Optical and Contact Lens Centre

Lim Kay Khee Optical and Contact Lens Centre is one of the oldest optical shops in Singapore with a history that goes back to the 1930s. The shop’s founder, Lim Kay Khee (1913-1988), came to Singapore from China at the tender age of nine, and worked as an apprentice at a Shanghainese optical shop where he acquired the skills of a master spectacle maker.

During World War II, Lim’s employers were killed, but he managed to escape to a house in Tai Gin Road with a set of optical equipment and technical manuals. These tools, coupled with Lim’s skills, proved to be a lifeline. A Japanese soldier had ordered a friend of Lim to procure a pair of glasses. Fearing for his life, this friend turned to Lim, who was able to craft a set that satisfied the soldier and saved both men from harm.

In 1946, after World War II ended, Lim set up Great China Trading Company, a wholesale business that imported spectacle frames and other optical products. The company was originally based at 339 Balestier Road, but in 1960, the business relocated to this shophouse. The shop was given its present name in the 1970s, when contact lenses were added to its offerings.

Today, Lim’s children, who are internationally certified opticians, continue to run the family’s two optical shops here and at Peninsula Plaza. Eyewear styles may change with the times, but this shop, with its original mosaic floor tiles and well-used visual charts and optical tools, still offers customers a peek into the past as the Lims continue a family trade that began more than 70 years ago. 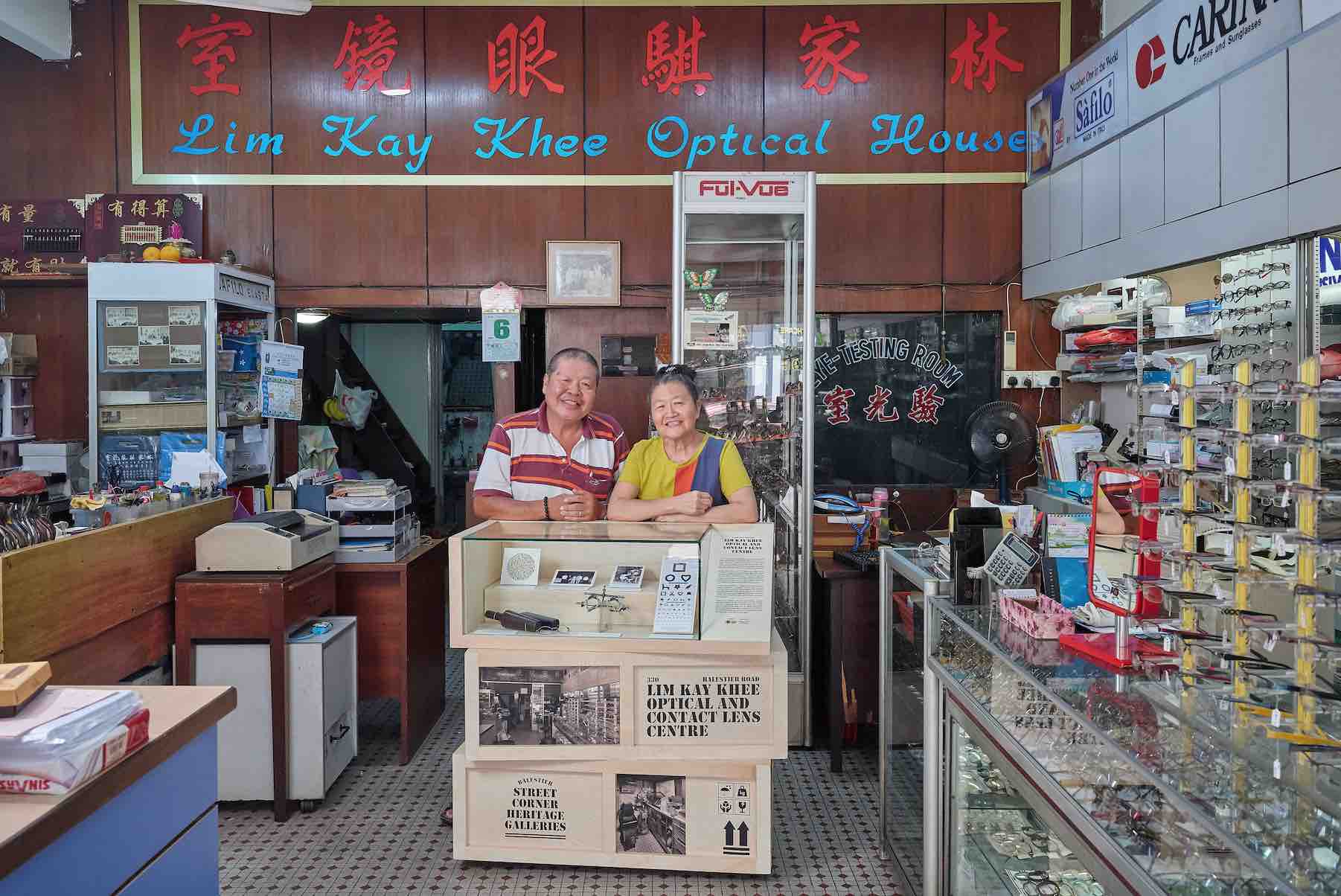 Since 1960, when Tan Thian Kang (1913-2008) opened this shop, fans of good local coffee have been making a beeline for Lam Yeo’s coffee beans. “Lam Yeo” is a Hokkien dialect term for “Nanyang” or “South Sea”, which refers to Southeast Asia. Tan chose to name his shop after this evocative term, as he had worked as an assistant editor at Nanyang Siang Pau, a prominent Chinese-language newspaper, in the 1950s.

Tan’s move from newsprint to coffee powder began in 1959, after a brief stint as a salesman for a coffee factory. He started off hawking hand-picked coffee beans door to door from the back of a van. As his business grew, Tan set up shop in 1960 as Lam Yeo Coffee Powder Factory.

During its early years, Lam Yeo’s shopfront offered 10 signature blends of coffee powder that were freshly ground and packed for walk-in buyers or delivered to kopitiams (coffee shops) all over the island. Tan also scoured the region for the finest coffee beans, roasting them with painstaking care and blending the results to create brews that won over fans.

Today, Tan’s descendants still serve up the shop’s legacy blends favoured by their long- time customers. However, Lam Yeo has also kept up with the times, and now offers gourmet blends from countries such as Brazil, Ethiopia and Colombia, which have helped the shop win over a new generation of coffee lovers. 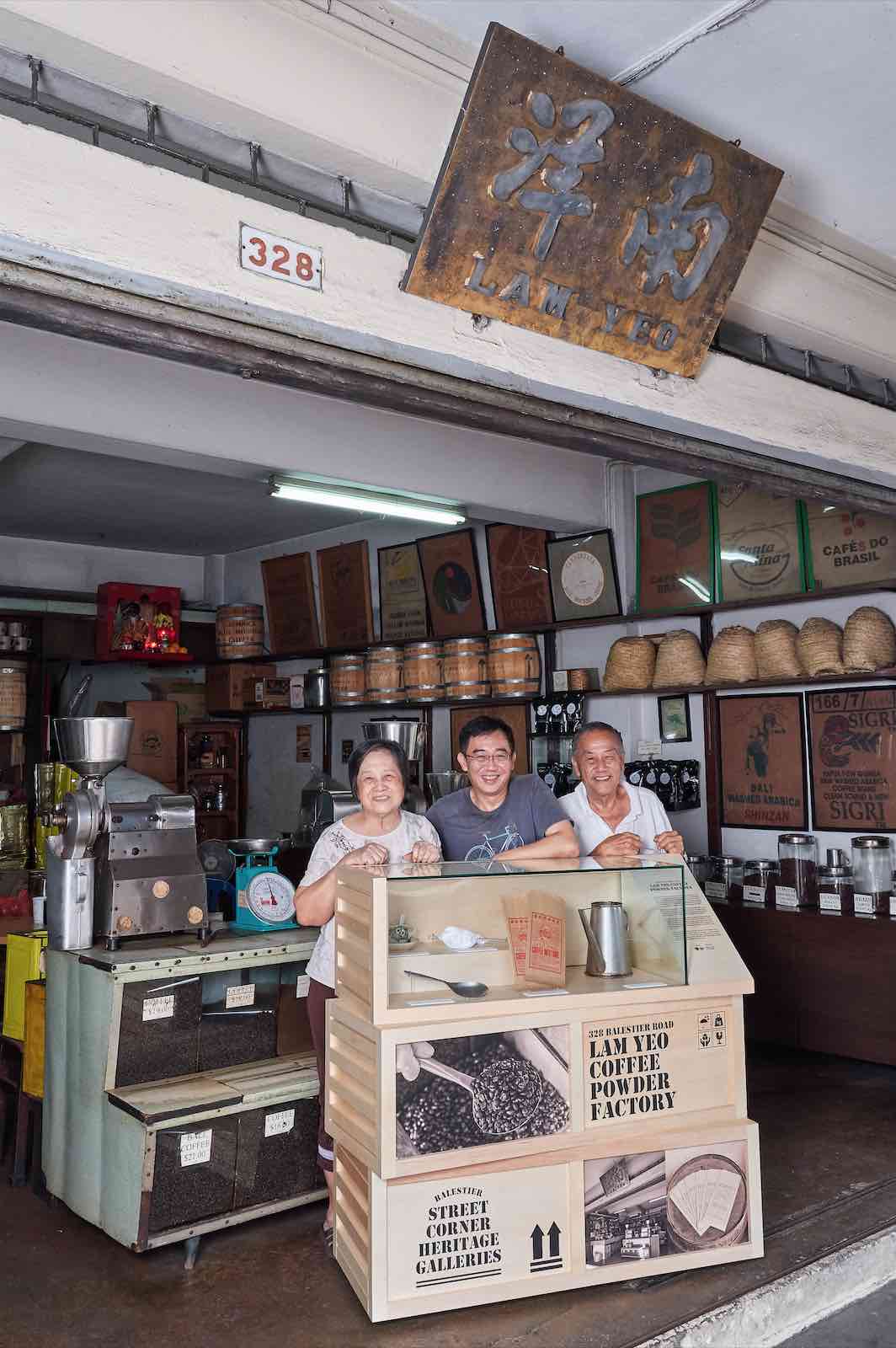 The scheme will subsequently be rolled out in four other precincts – Kampong Gelam, Little India, Kreta Ayer/Chinatown and Geylang Serai by 2022.