This June, Singapore Art Museum (SAM) will launch its fourth exhibition of the SAM Mini Mobile Museum, featuring Slander! by multidisciplinary artist Jeremy Sharma, a presentation of his research into Singapore’s films and popular culture of the 1950s and 1960s. The exhibition will open at Woodlands Regional Library from 9 June to 25 July 2021, and travel to Jurong and Tampines regional libraries on 28 July and 15 September 2021 respectively. The SAM Mini Mobile Museum is a travelling art exhibition held in partnership with the National Library Board, that introduces the multifaceted nature of contemporary art through a selection of artworks from SAM’s collection, adapted for non-museum spaces and created by Southeast Asian artists. 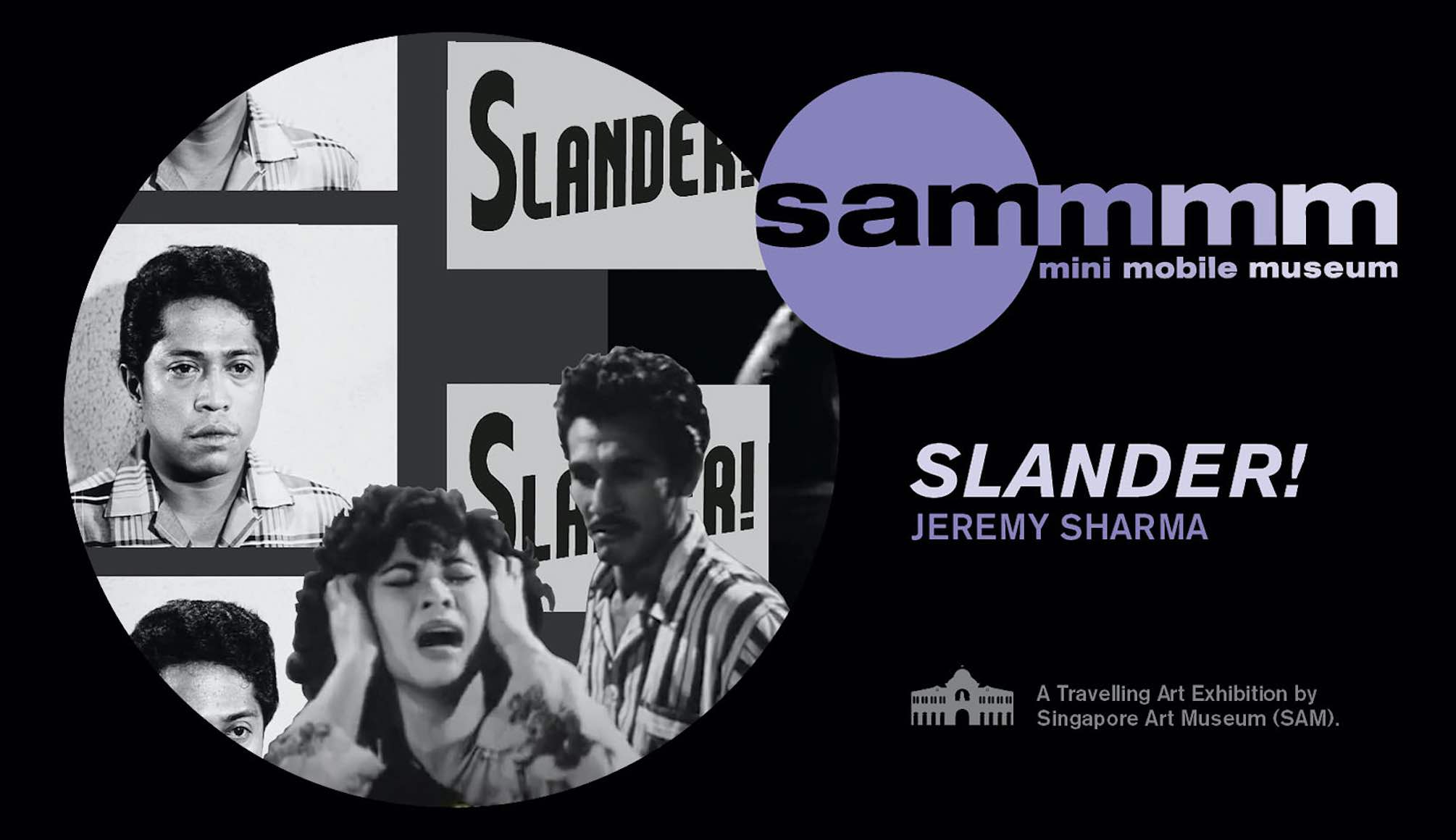 The exhibition’s title references the 1959 film Korban Fitnah (Victims of Slander), a central feature in Sharma’s 2017 installation A White, White Day — now part of the museum’s collection. With A White, White Day, Sharma extracted video data from the film and translated these signals through LED nodes in the lightboxes, as a means of deconstructing the cinematic image and pointing towards the haziness of our memories. 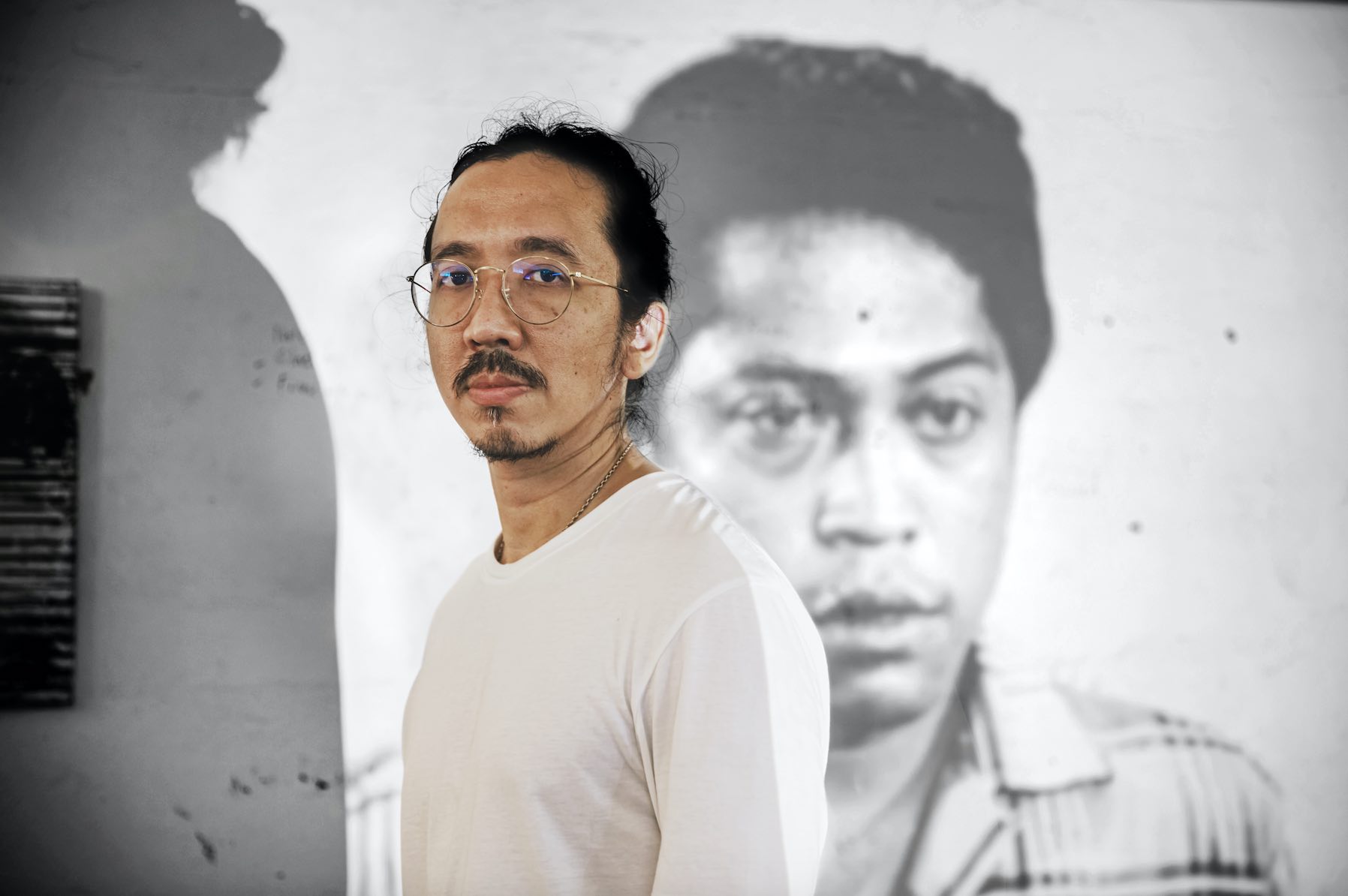 As an artist and musician, Jeremy Sharma’s works and experiments look into scenes and places through the lens of modernity, while employing elements of voice, light, atmospheres, film, music, movement and architecture. His practice examines our relationship with the information age and is situated within the everyday. More recently, the artist has produced installations involving sound, performance, and moving images, with a particular interest in cultural archives. 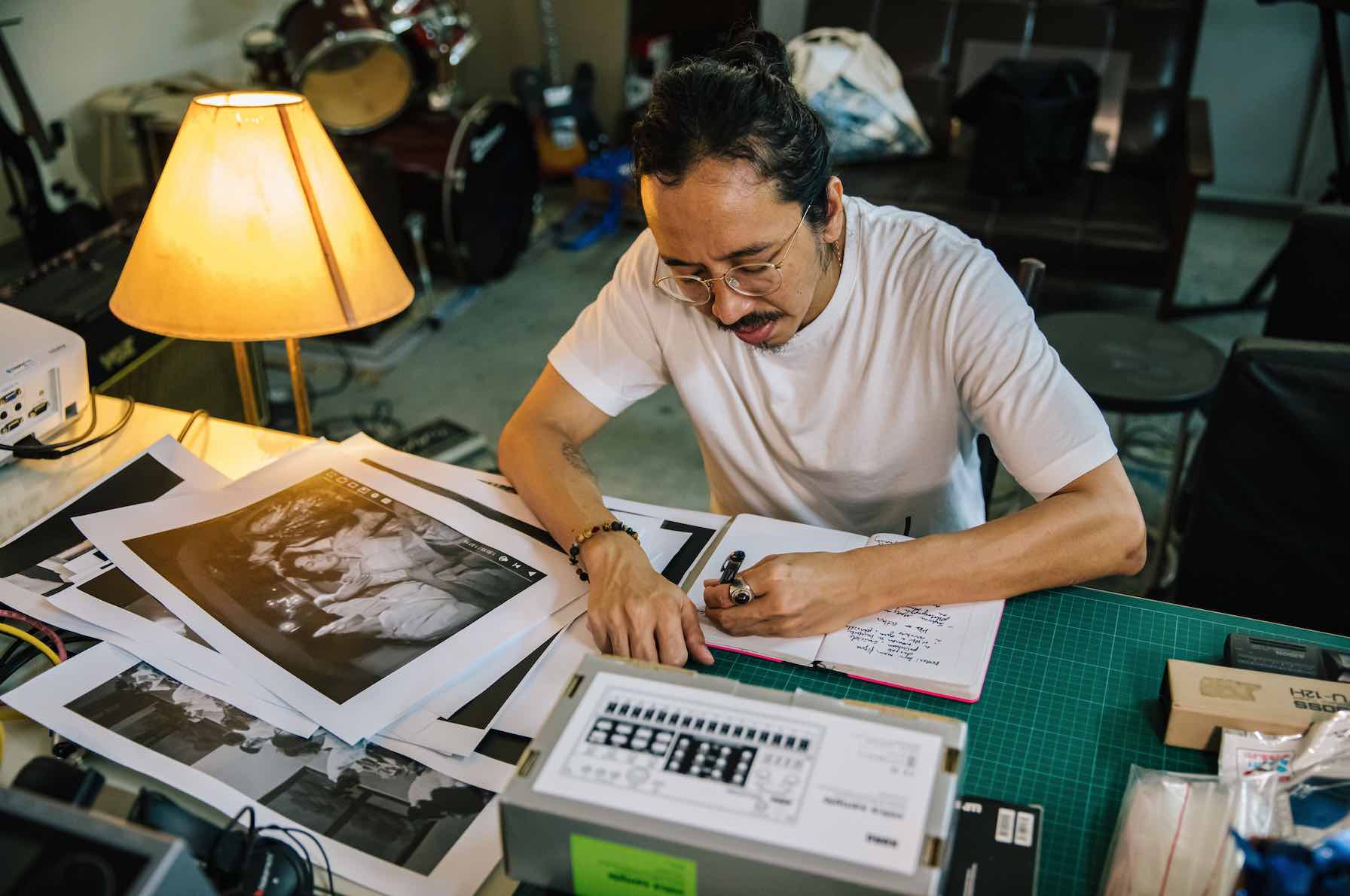 This can be seen in the making of Slander!, where Sharma revisits a range of films shot and produced in Singapore from 1958 to 1963, the post-war period between the heyday of Singapore’s film industry and Singapore’s eventual independence. The films that emerged from this golden era of Malayan cinema helped sustain the region’s postcolonial search for a national identity and future, as well as its negotiations with the order of modernity at large. As such, the films often reflected a palpable sense of social ferment and restlessness.

SAM Assistant Curator Kenneth Tay, who curated the fourth edition of the Mini Mobile Museum, says, “The Mini Mobile Museum allows us to provide artists with opportunities to revisit some of their earlier research interests, and to stage them not just outside the museum and its usual audience, but also over time through the various library spaces. Particularly in this edition, we collaborated with Jeremy Sharma on Slander! to locate the film Korban Fitnah within some of the other films produced during this same period, and to look at the broader cultural and political contexts informing these films.” 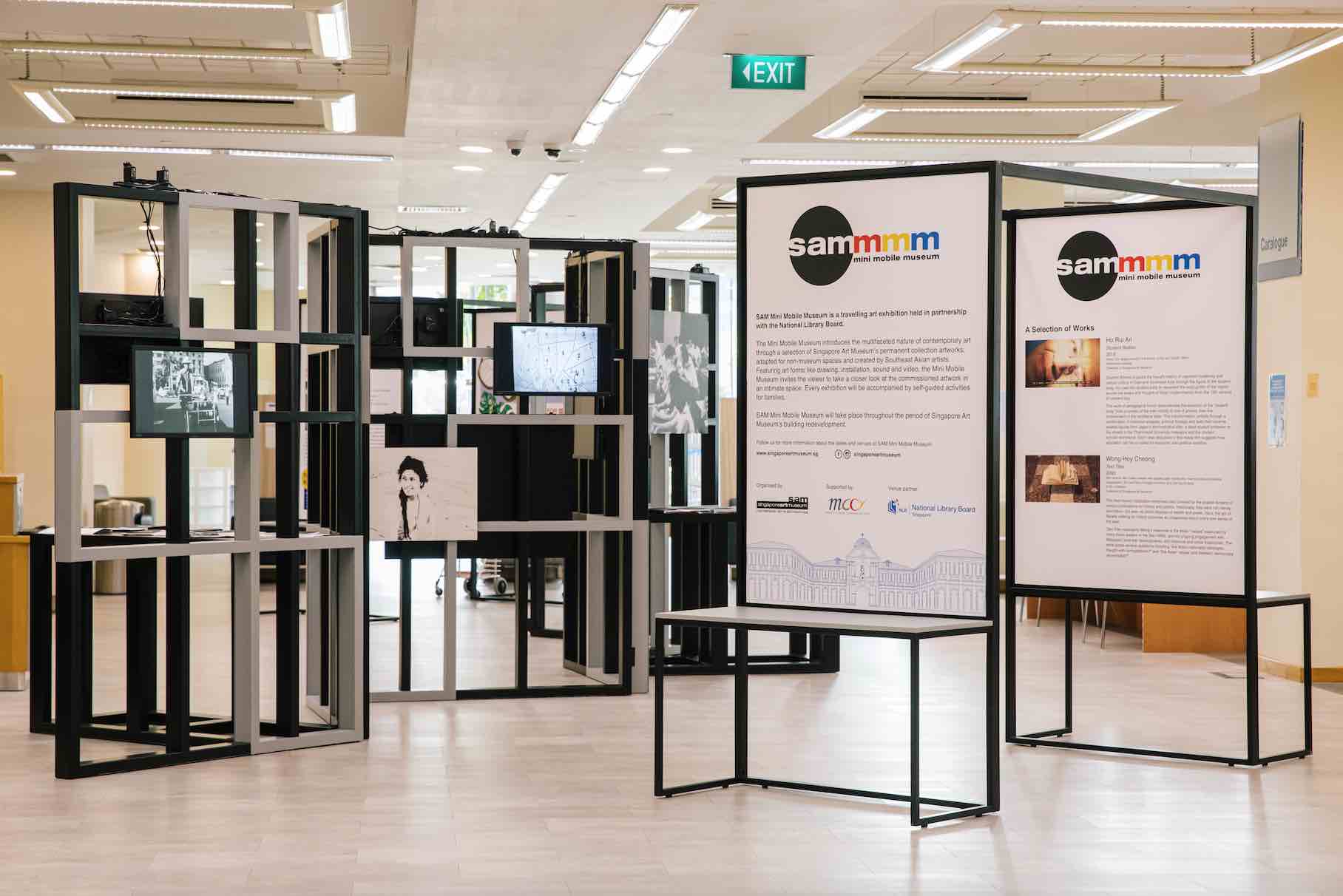 Elaborating on Sharma’s practice, he adds, “Jeremy Sharma has, in recent years, begun thinking more intently with moving images, but also how to work with them through a choreography of installations, text, and performances. I’ve been drawn to his practice as one that plays with signals and frequencies. In this edition, we worked to create this space where the past seems to interfere into the present, and where the library’s audiences could read across time, media formats and different voices.  Not to be nostalgic about the past, but to tune in on how our present environment is constantly being shaped by these seemingly ‘weak signals’.”

Slander! looks back at a cultural moment when a new nation started rapidly urbanising and shaping its politics. It features a system of modular structures with themes that recur in Sharma’s practice — the modernist notions of shape, size, scale, seriality and repetition. On display is a choreography of film footages, digitised images, text, objects and printed matter.

Jeremy Sharma shares, “With Slander!, I wanted to explore how identities are formed through the processes of urbanisation and nationhood, and also consider how the contemporary self is very much shaped by history. Watching selected films while experimenting with writing and history, I thought about questions like: How can we use these images and film archives to look at history through an alternative lens? Can we produce a network of objects and images to engender new meanings and narratives? Slander! refers to the title of the Cathay-Keris film Korban Fitnah. But I also wanted it to remain as an ambiguous expression to suggest that certain imaginations, in our rapid modernisation, have been silenced to make way for other forms of imaginings.” 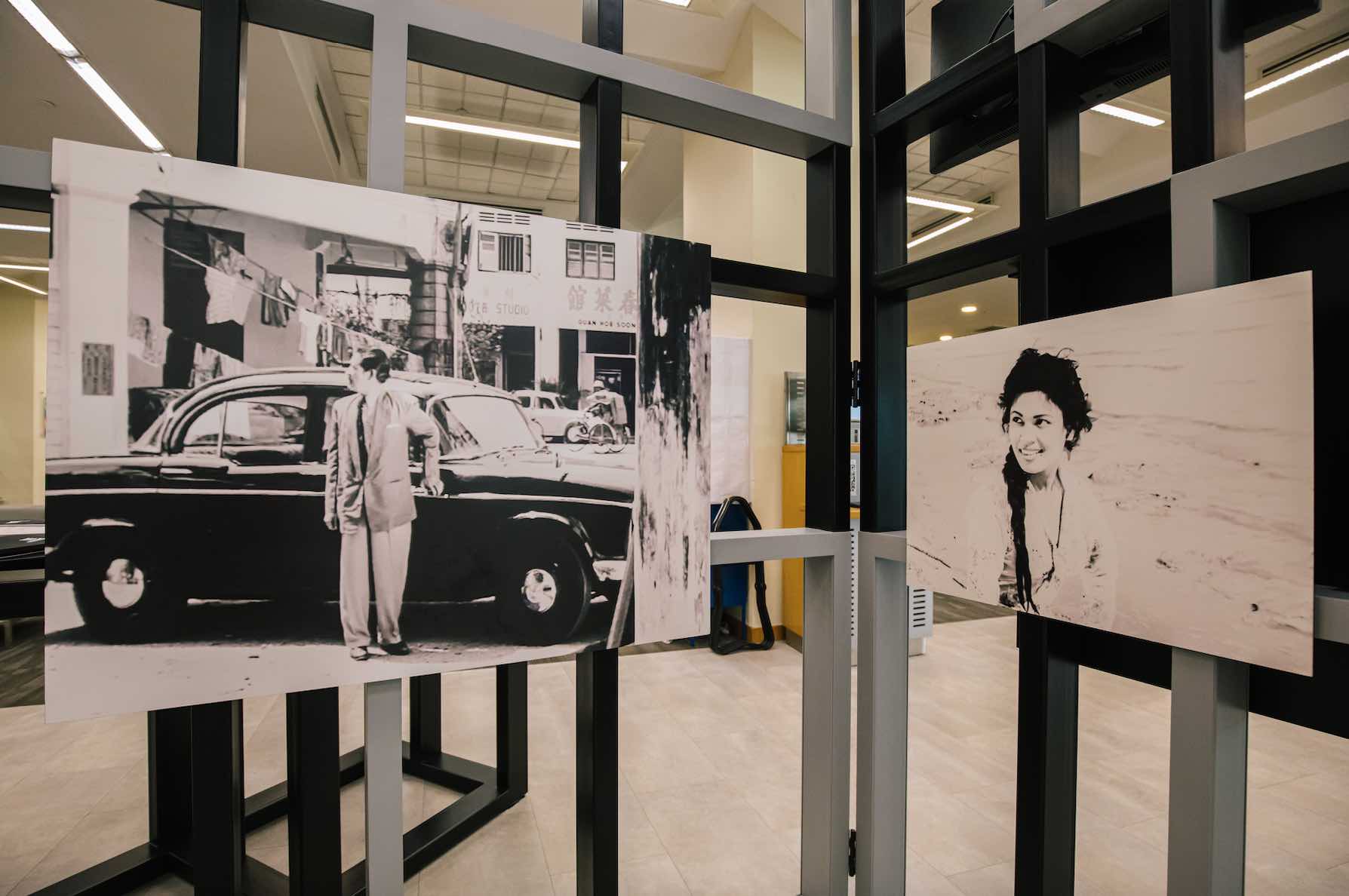 Public programmes to complement the exhibition include A Date with SAM, an online conversation with the artist and curator as they share behind-the-scenes insights into the making of the work; and  Kopi, Teh and Contemporary Art, a virtual guided tour specially designed for seniors. Following the successful pilot of artwork labels for children, this edition also features specially designed labels for young visitors, which break down the themes and concepts in the artwork in a manner that is more engaging and accessible for children. There is also a take-home activity for children to create their own film strip inspired by the artwork.

The first installment of Slander! will take place at the Woodlands Regional Library from 9 June to 25 July 2021. Subsequent installments will be presented at the Jurong and Tampines Regional Libraries from 28 July to 12 September, and 15 September to 31 October 2021 respectively.