Fans of Iron Man will be delighted to know that the much-awaited Disney Parks’ first Marvel-themed ride, Iron Man Experience – Presented by AIA, will be launching at Hong Kong Disneyland on 11 January 2017! For the very first time, this new ride-through attraction is featuring a story based in Hong Kong. You and your family will be able to soar through Hong Kong’s skies alongside Iron Man and battle the evil forces of Hydra in the multi-sensory immersive motion experience. 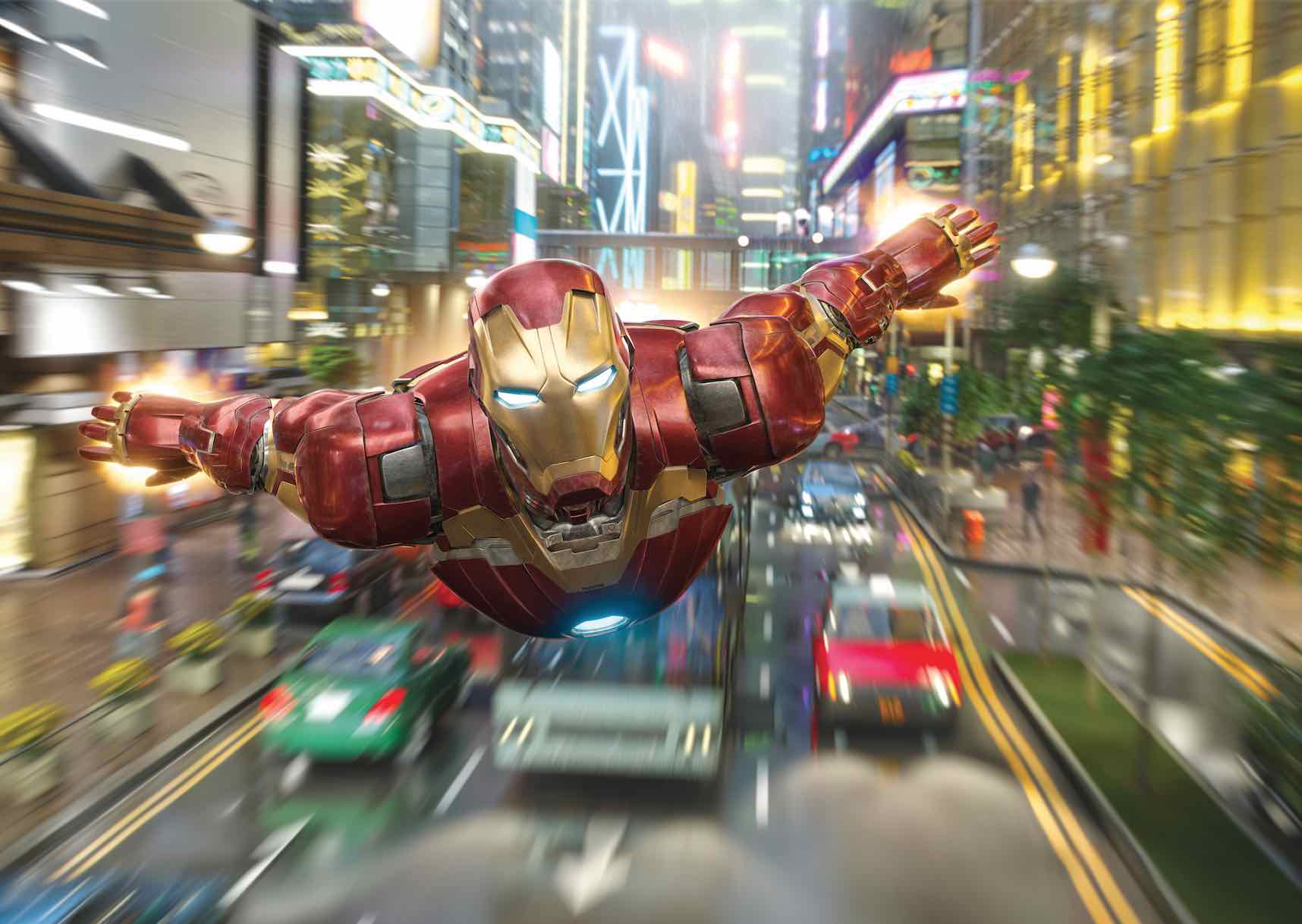 “Hong Kong Disneyland is excited to bring the first-ever Marvel-themed ride in a Disney Park to Hong Kong,” said Samuel Lau, Executive Vice President and Managing Director of Hong Kong Disneyland Resort. “The Iron Man Experience is a unique immersive motion experience using Hong Kong as the story background for the very first time. We are proud to give local and overseas guests a different perspective and experience of Hong Kong while promoting our vibrant city to the world at the same time.” 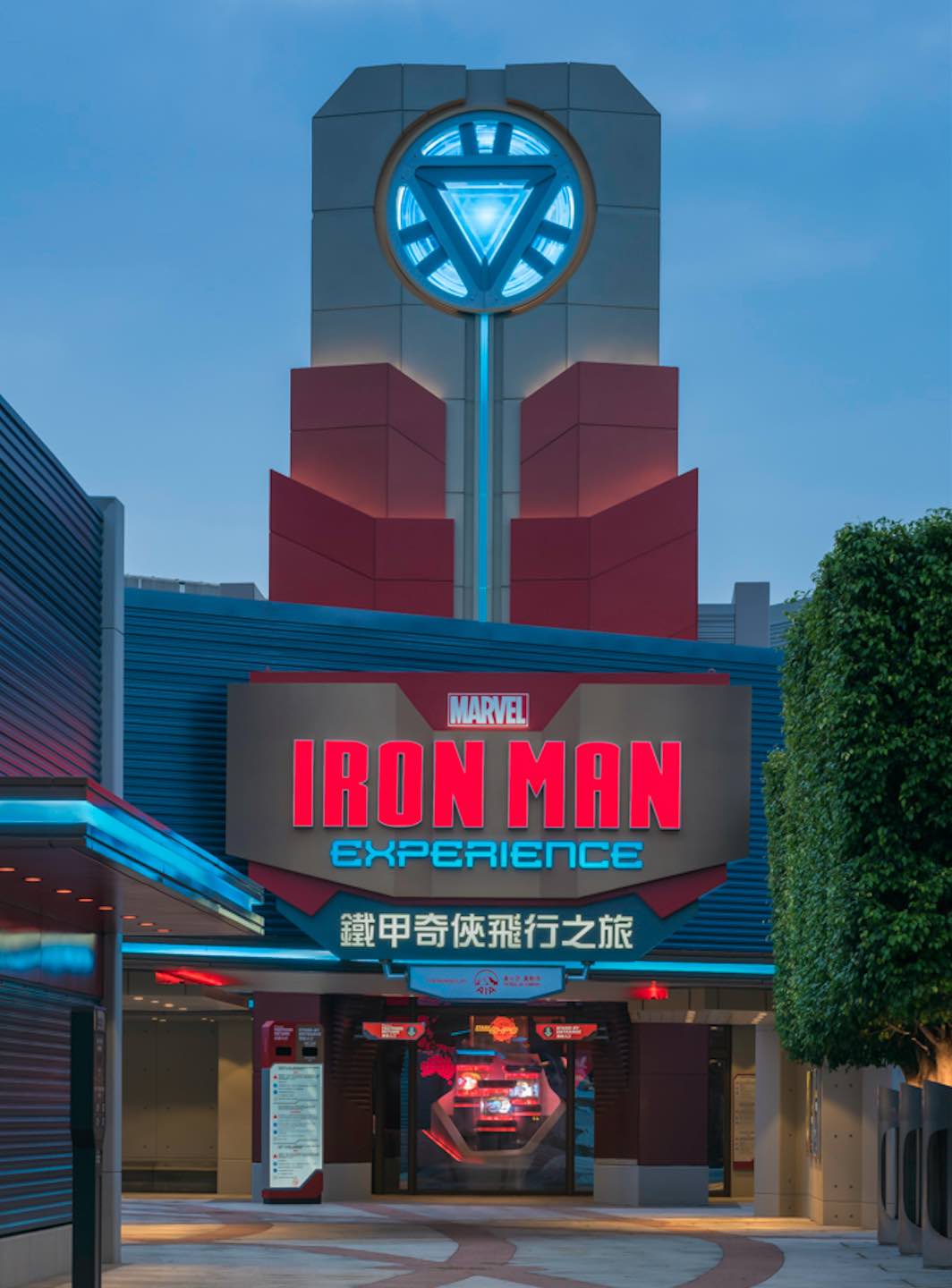 You will be among the first to explore Tony Stark’s latest innovations up close and fly in a gravity- defying Iron Wing flight vehicle in Iron Man Experience. He has also made Hong Kong the Asia headquarters of Stark Industries hereafter. The park has spent over three years to design and create Iron Man Experience – complete with flight simulators, 3-D projection, surround sound and other special effects that immerse you and other guests in the Marvel story of a battle with the evil forces of Hydra. 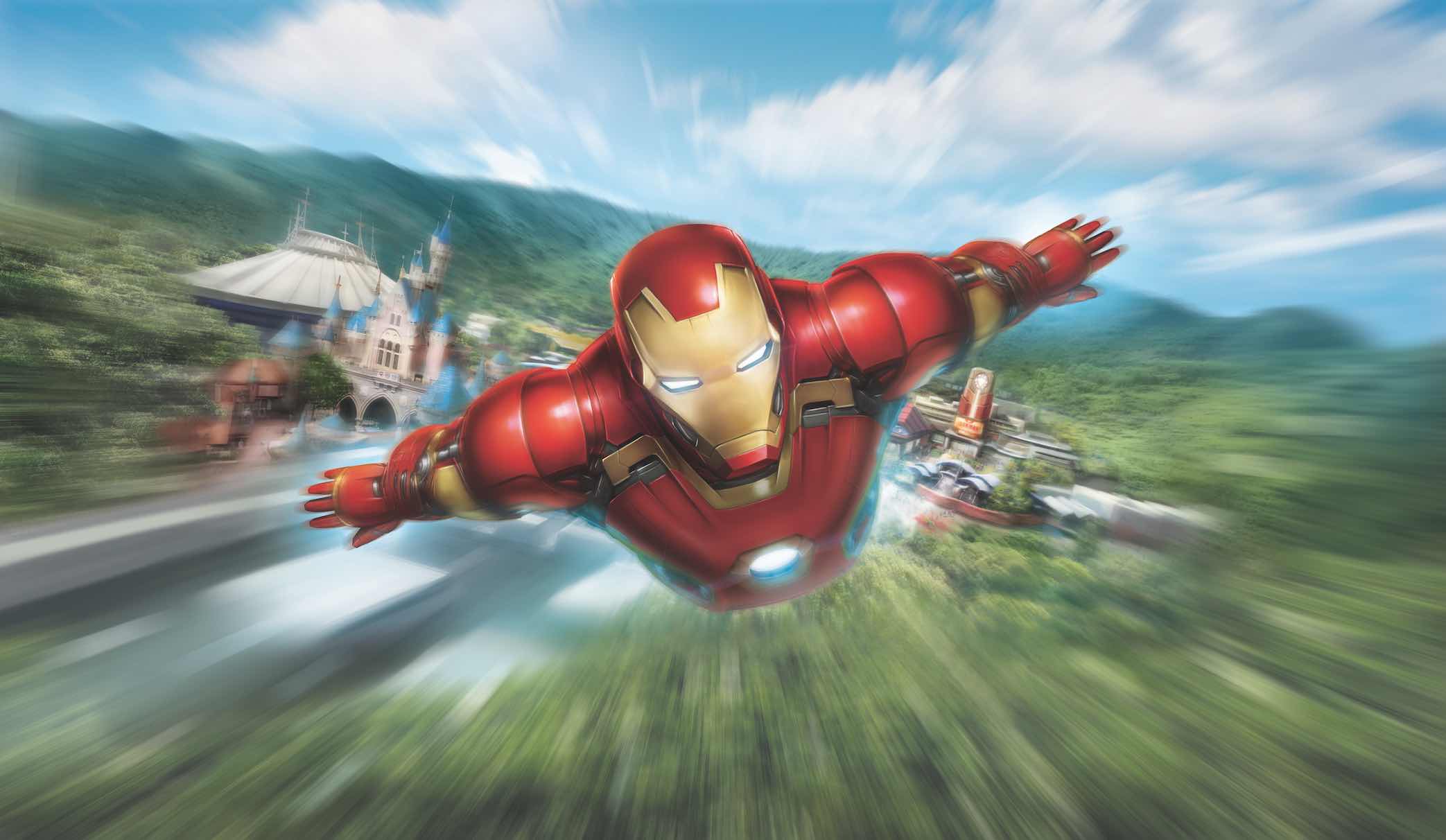 For the first time, the park has integrated strong Hong Kong elements into a park attraction by using Hong Kong and its skyline for the fly-through ride. After putting on a pair of StarkVision glasses and taking off on Stark Industries’ special Expo-edition Iron Wing, you will make their way to the Hong Kong Stark Tower powered by the arc reactor and whizz alongside Iron Man through streets that resemble those in West Kowloon and downtown, and fly over iconic Hong Kong landmarks like Tsing Ma Bridge, Victoria Harbour and the city’s pristine mountain ranges. 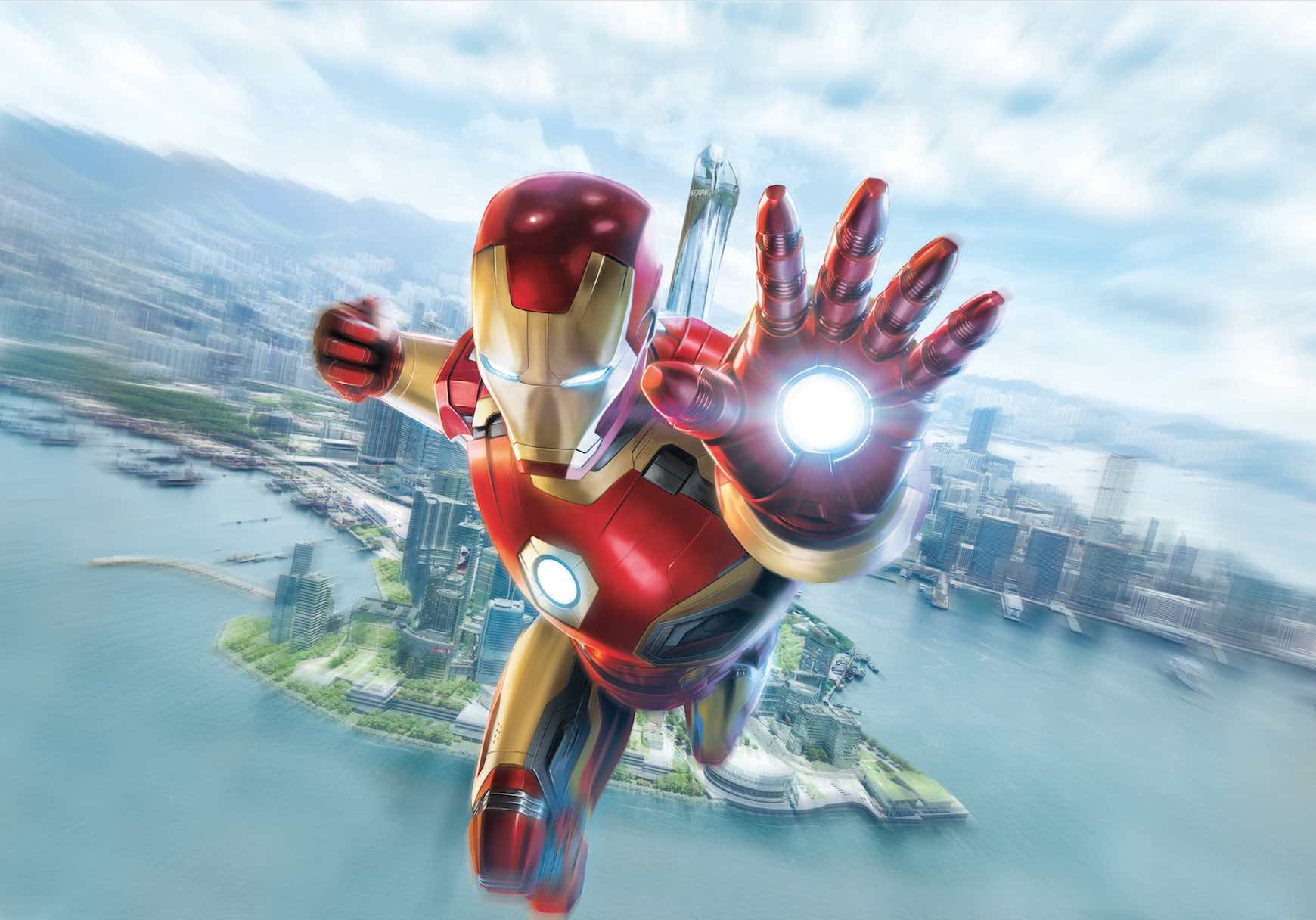 “We’re excited to be able to create the Iron Man Experience with an authentic Iron Man Super Hero adventure that takes place in a real city, Hong Kong,” said Ted Robledo, Creative Director of Walt Disney Imagineering. “We’ve set this up as the next Stark Expo after the one Tony Stark did in 2010 in New York. He’s showcasing his latest and greatest products from Stark Industries, so guests see all kinds of things in the exhibition halls when coming through the Expo. But the ultimate experience is to get on this brand-new Iron Wing vehicle, which is essentially a really large Iron Man suit that 45 guests can get into. And guests will be going out on a tour of Hong Kong ending at the Hong Kong Stark Tower.”

More Iron Man-themed Experiences To Be Discovered At Tomorrowland

The Iron Man Experience will be complemented by a range of Iron Man-themed experiences unveiling at Tomorrowland in the run up to the grand launch of the Stark Expo. 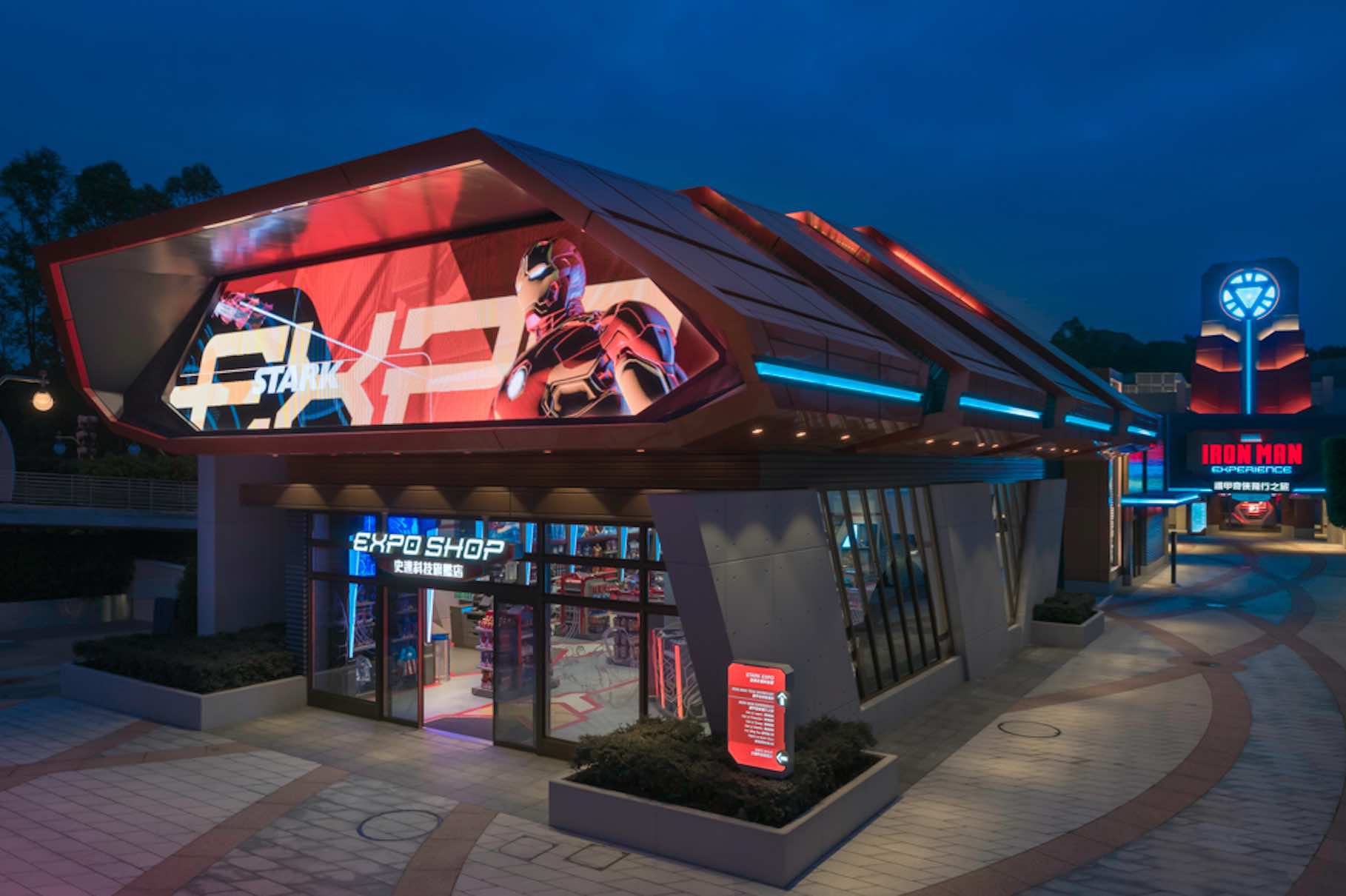 The brand-new Expo Shop is already opened to greet you and your family with a tantalising range of 70- plus Hong Kong Disneyland exclusive Iron Man merchandise items and more than 250 items of Marvel- themed memorabilia, among them collectables and toys, glowing key chains, souvenirs as well as apparels and accessories. Some of the exclusive apparels feature Hong Kong’s postcard-perfect scenery or Stark Expo themes. 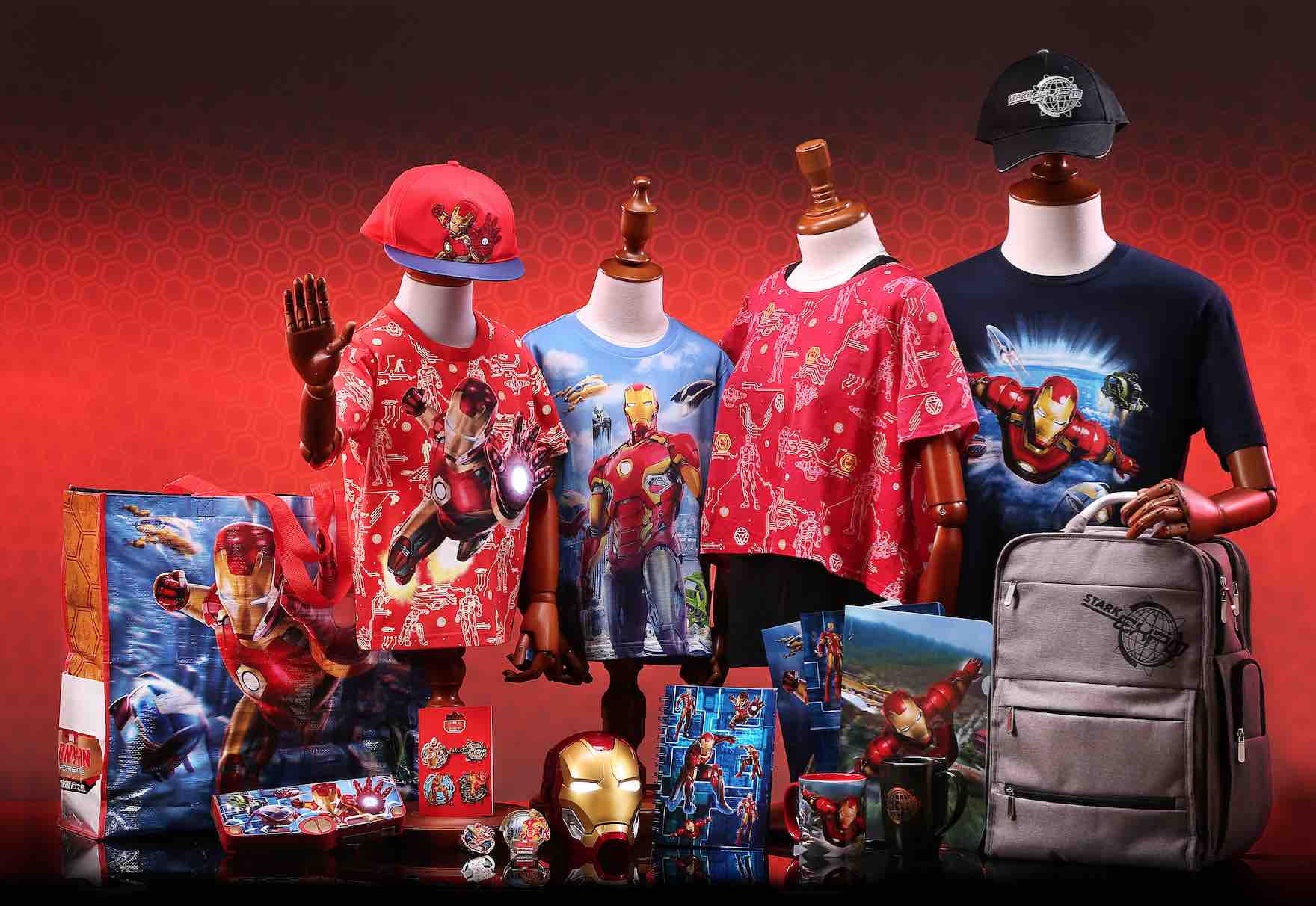 In the Expo Shop, Iron Man fans get to try on Iron Man’s armour suit in the interactive game Become Iron Man at The Stark Expo. Through interactive motion-sensing technology, you and your family can experience the various functions of the armour and feel what it is like to be a superhero as they fight the forces of evil while zipping through streets that closely resemble Hong Kong. You are also encouraged to take home a memento package featuring a digital photo collage of their Become Iron Man adventure, as well as a digital download of an approximately 35-second video of their transformation. 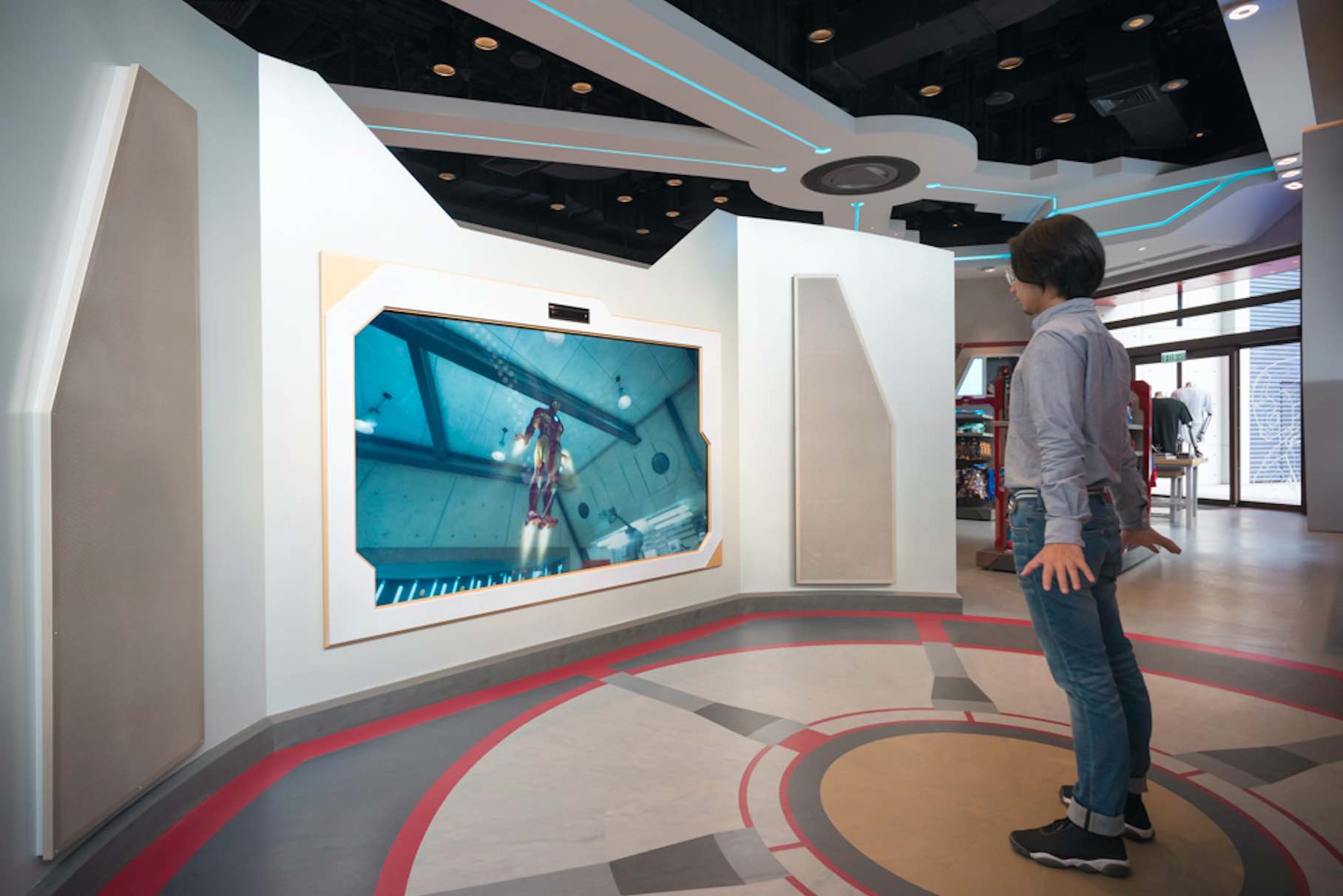 The park and hotel restaurants have prepared more than 25 Iron Man-themed food and beverage choices to refuel during the intense Iron Man Experience. Among the delectable choices are an Iron Man Waffle, Iron Man stein, Iron Man desserts at Chef Mickey Buffet and Iron Man beverages served at the resort hotels. 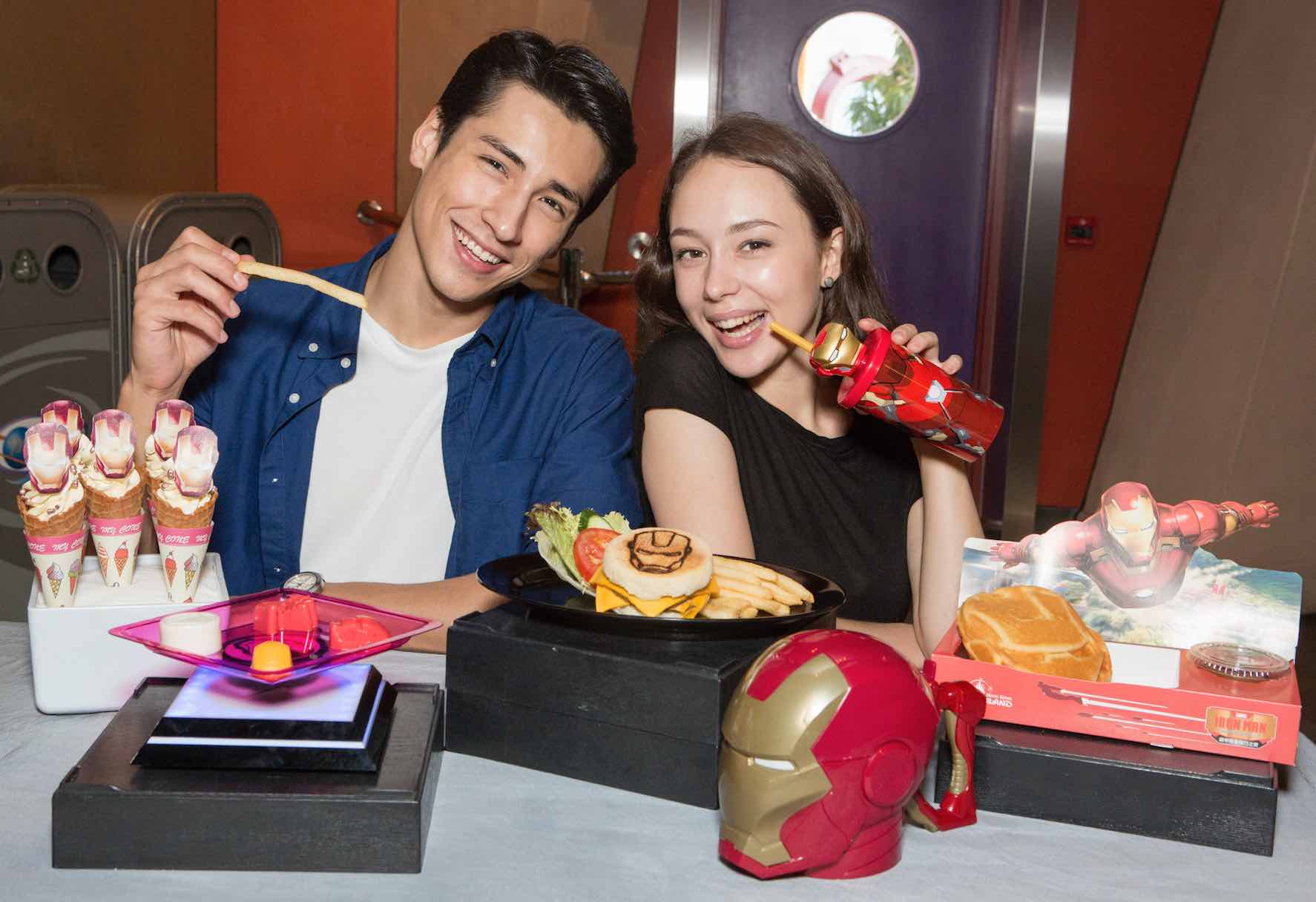 At the Iron Man Tech Showcase presented by Stark Industries, you will find various Iron Man armour suits. Iron Man will also make his first appearance at Hong Kong Disneyland to meet and interact with you and your loved ones. 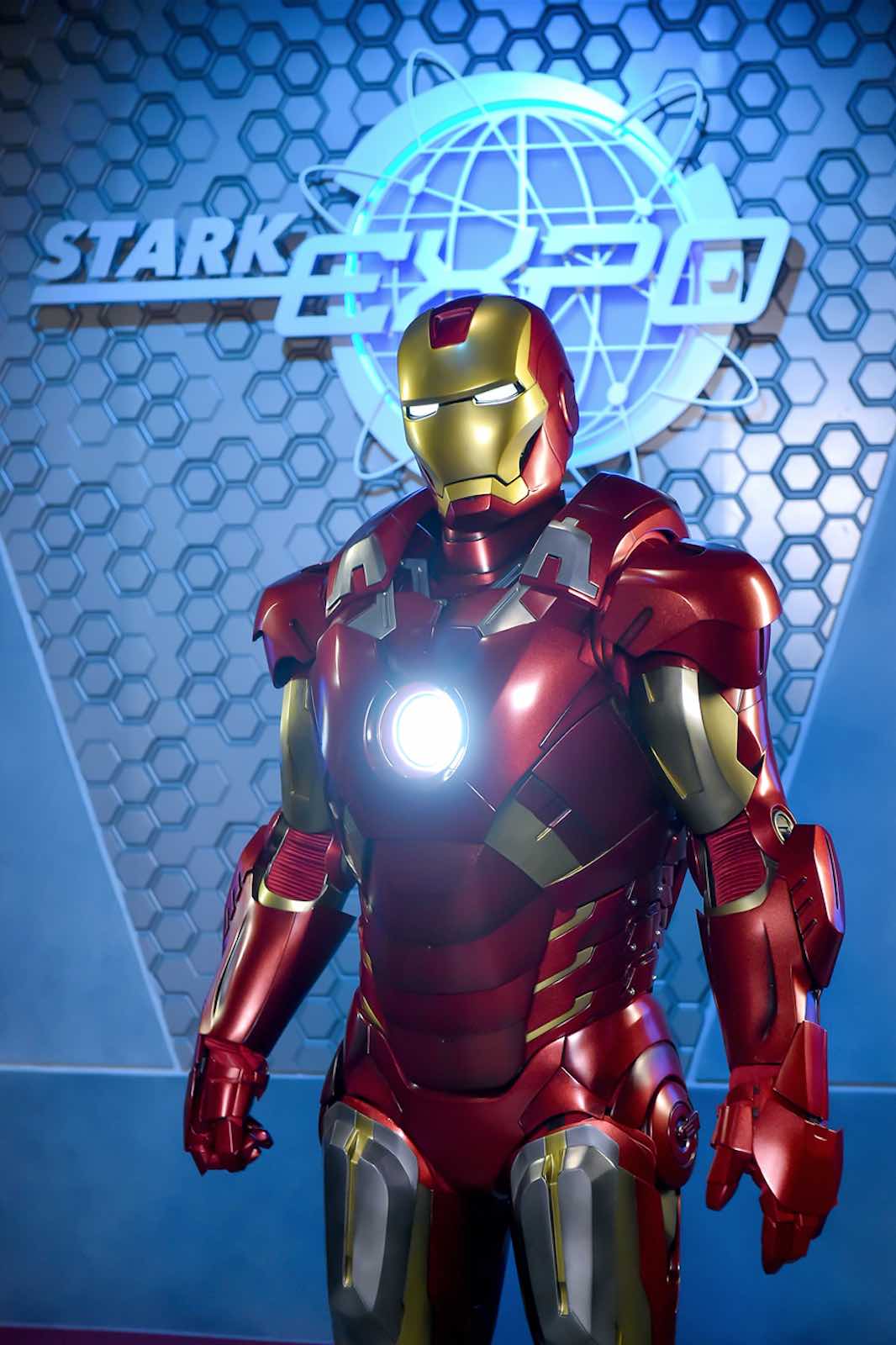 If you are travelling to Hong Kong soon, you must not miss Iron Man Experience Sneak Peek from 23 December 2016 to 8 January 2017. Starting from 23 December 2016 (excluding 9 & 10 January 2017), guests staying at the resort’s two hotels will receive a Priority Admission Pass* of Iron Man Experience to shorten the wait for their turn on the Marvel-themed ride! Rooms are limited, make your booking today! 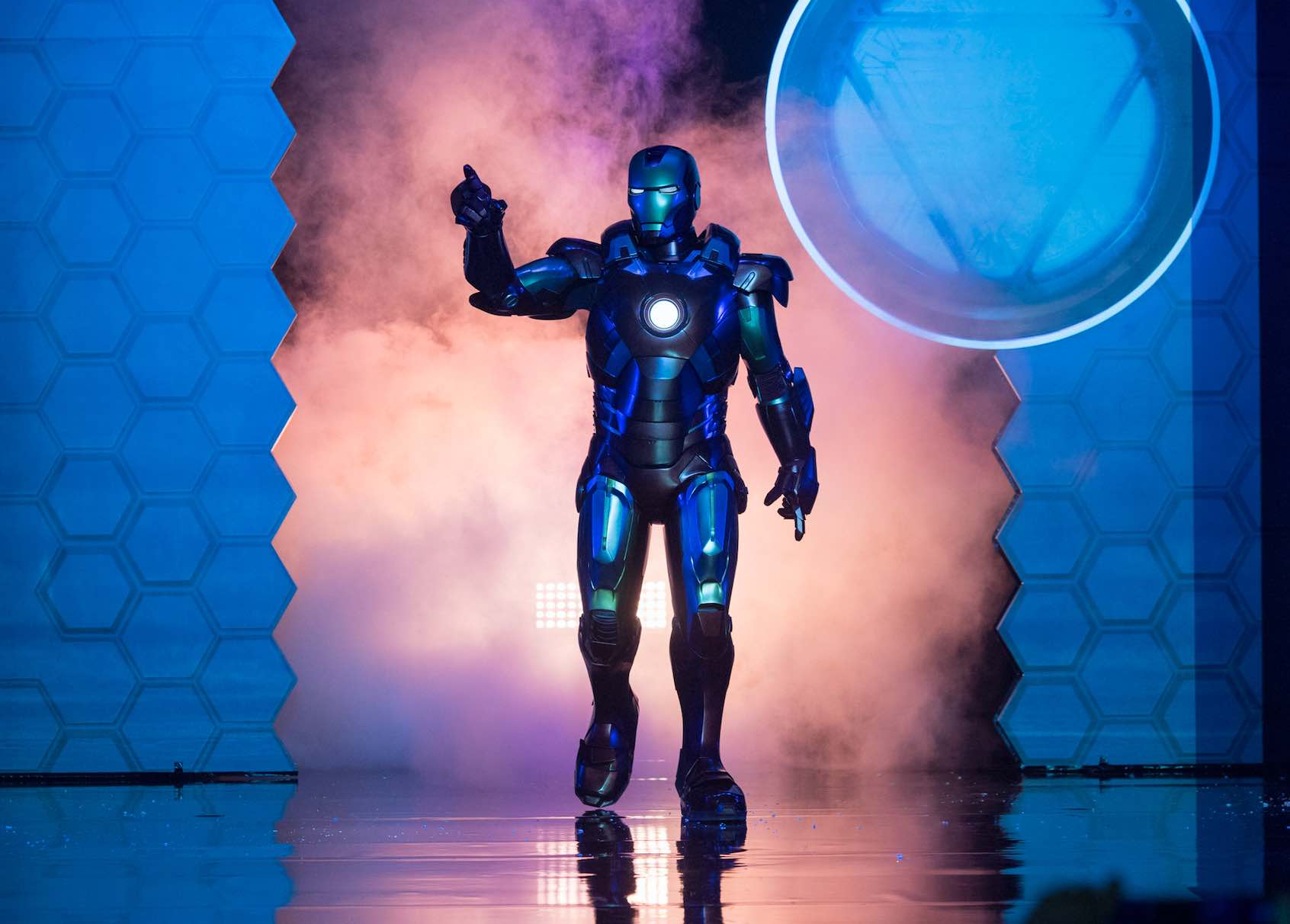 *Priority Admission Pass will be given according to the number of guests in each room with a maximum of four passes per room, subject to availability.