In celebration of Pixar’s 35th anniversary, Harbour City is joining hands with Disney and Pixar once again to bring to the city the first-ever Harbour City Pixar Fest from now through 15 August! Leveraging the horizontal and spacious mall layout, Harbour City adopts a new format to organize a large-scale event with installations and check-in points throughout the mall to diversify foot traffic and minimize close physical contact. In addition, Harbour City creates a series of interactive activities, including augmented reality (AR) check-ins and an online game, connecting the real and virtual world across offline and online platforms, offering guests multidimensional experiences.

Memorable scenes featuring 12 Pixar movies are brought to life at different parts of the mall. In addition, the iconic Pixar Ball and Lamp installation, 5.2 meters in height, matching the size as that in its headquarters in California, marks its first appearance in Hong Kong at Harbour City’s observatory deck, “Ocean Terminal Deck” under the backdrop of the stunning Victoria Harbour views. 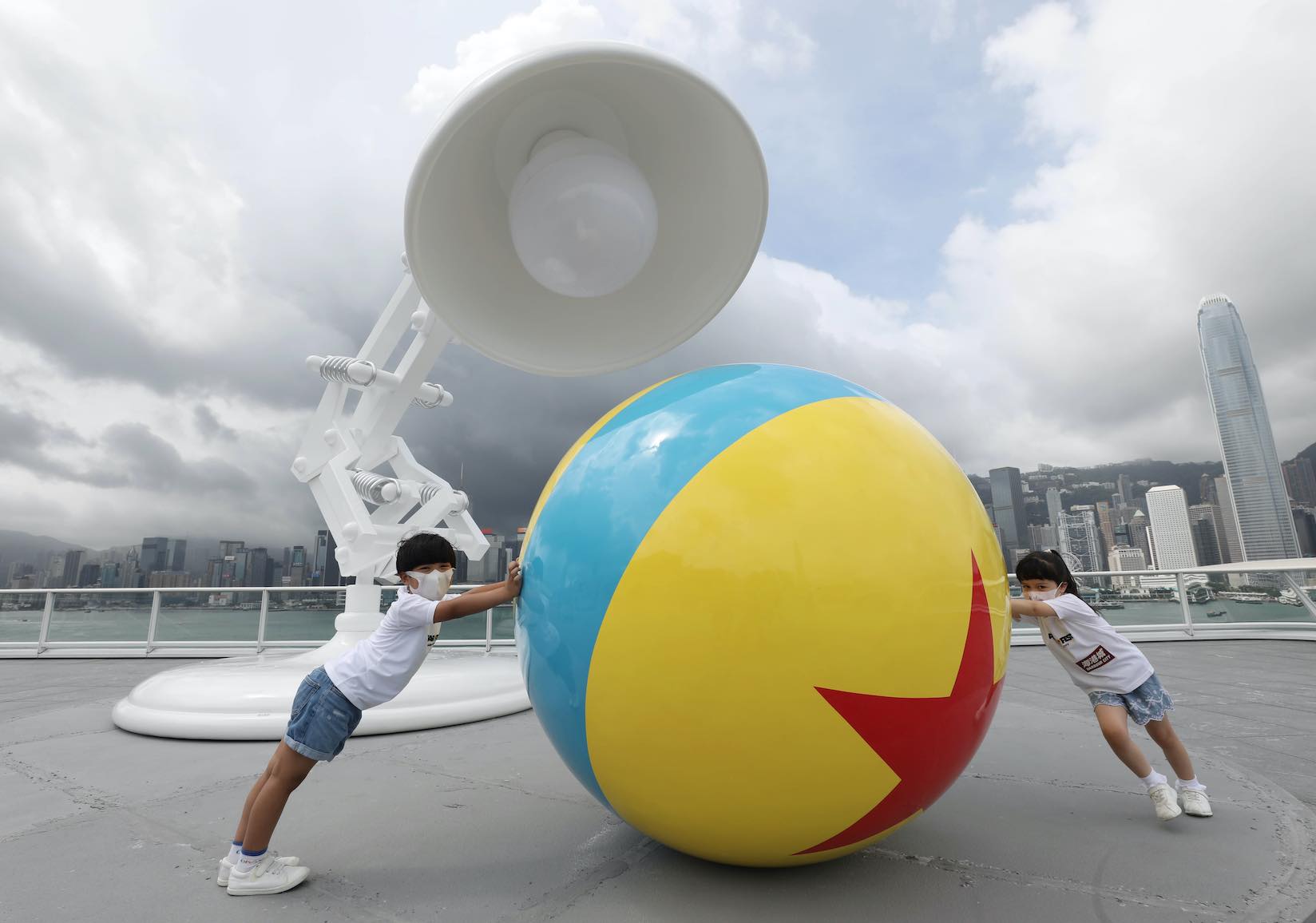 1. Photo Spots Inspired by Classic Movie Scenes Throughout the Mall

Harbour City will take you on an eventful movie journey of Pixar through mesmerizing photo spots featuring 12 of Pixar’s animations across the mall. Instant professional shooting service will be provided on-site at Ocean Terminal Deck, as well as at the Soul and Toy Story 4 checkpoints for you to capture the joyful moments! 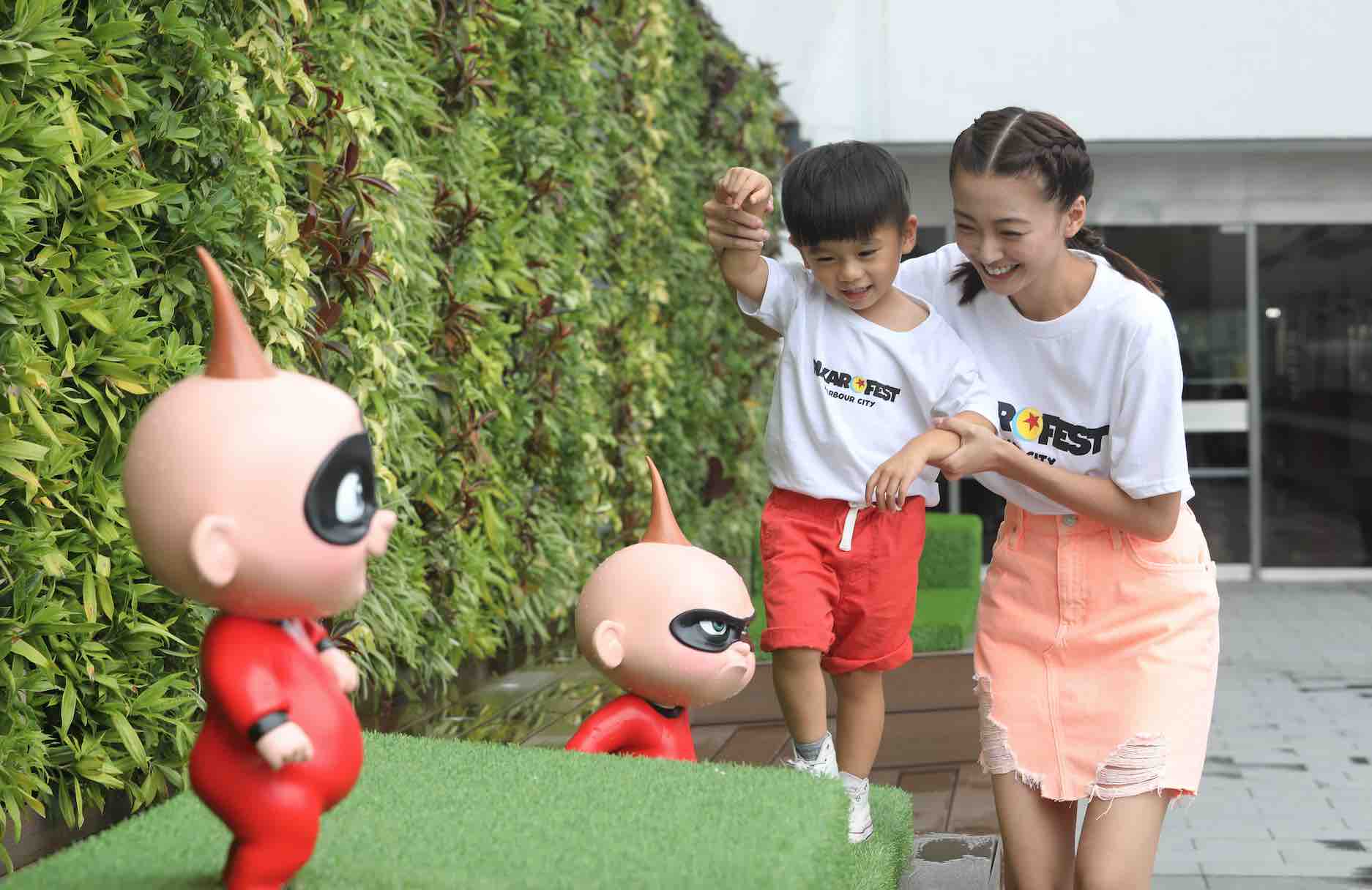 Entering Ocean Terminal Forecourt, you will discover a 3.4 meters high Pixar logo and a 7 meters high Pixar Fest arch in layering design, painted in the iconic red, yellow and blue colours from Pixar Ball, with images of Pixar’s characters. 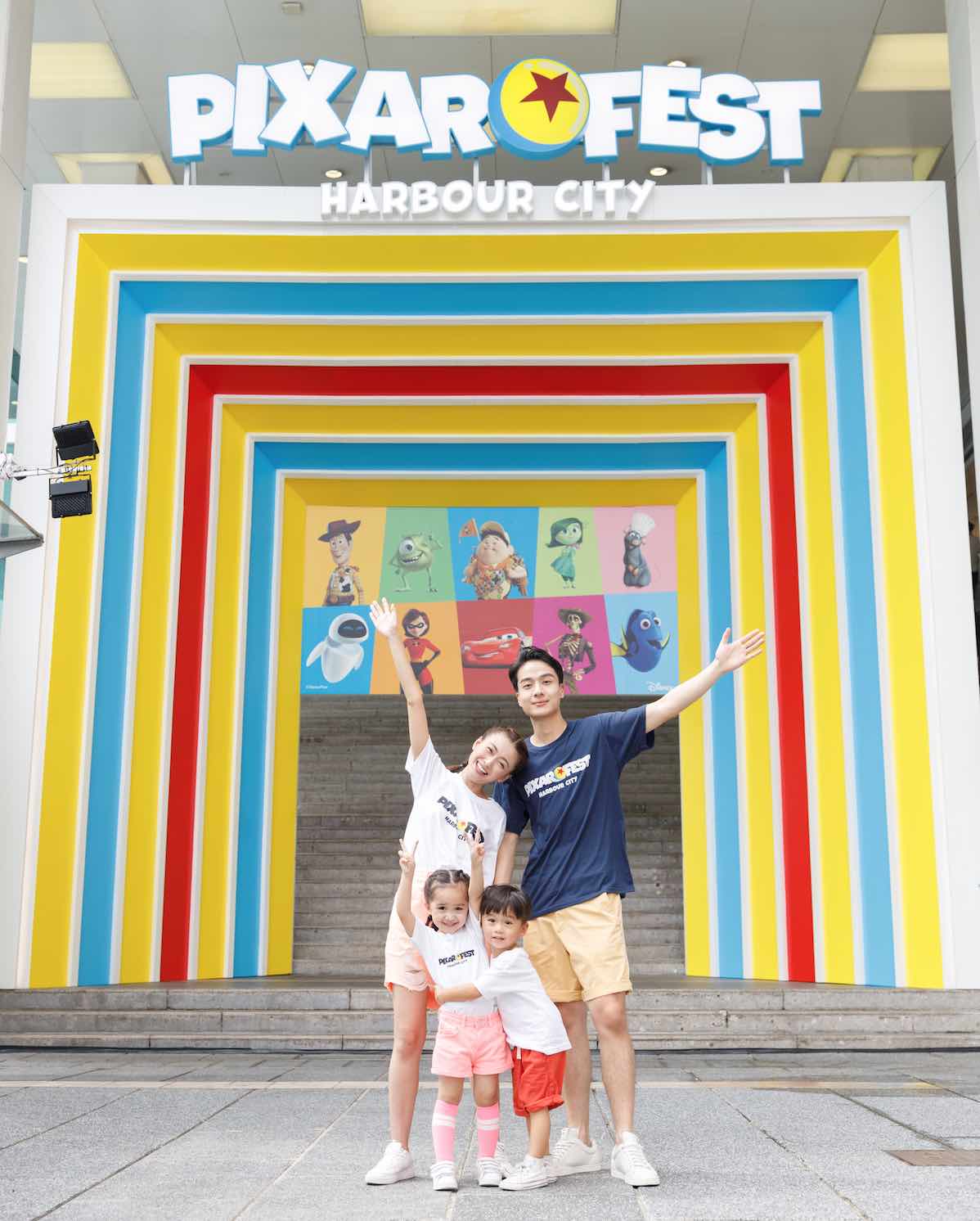 The iconic Pixar Ball and Lamp installation, 5.2 meters in height, matching the size as that in its headquarters in California, will make its first appearance in Hong Kong at Ocean Terminal Deck, against the 270-degree panorama of Victoria Harbour as the backdrop. Inside the mall, you will also find Toy Story 4’s Woody and Buzz Lightyear, over 4 meters and 3 meters high respectively, ready to soar “to infinity and beyond”! 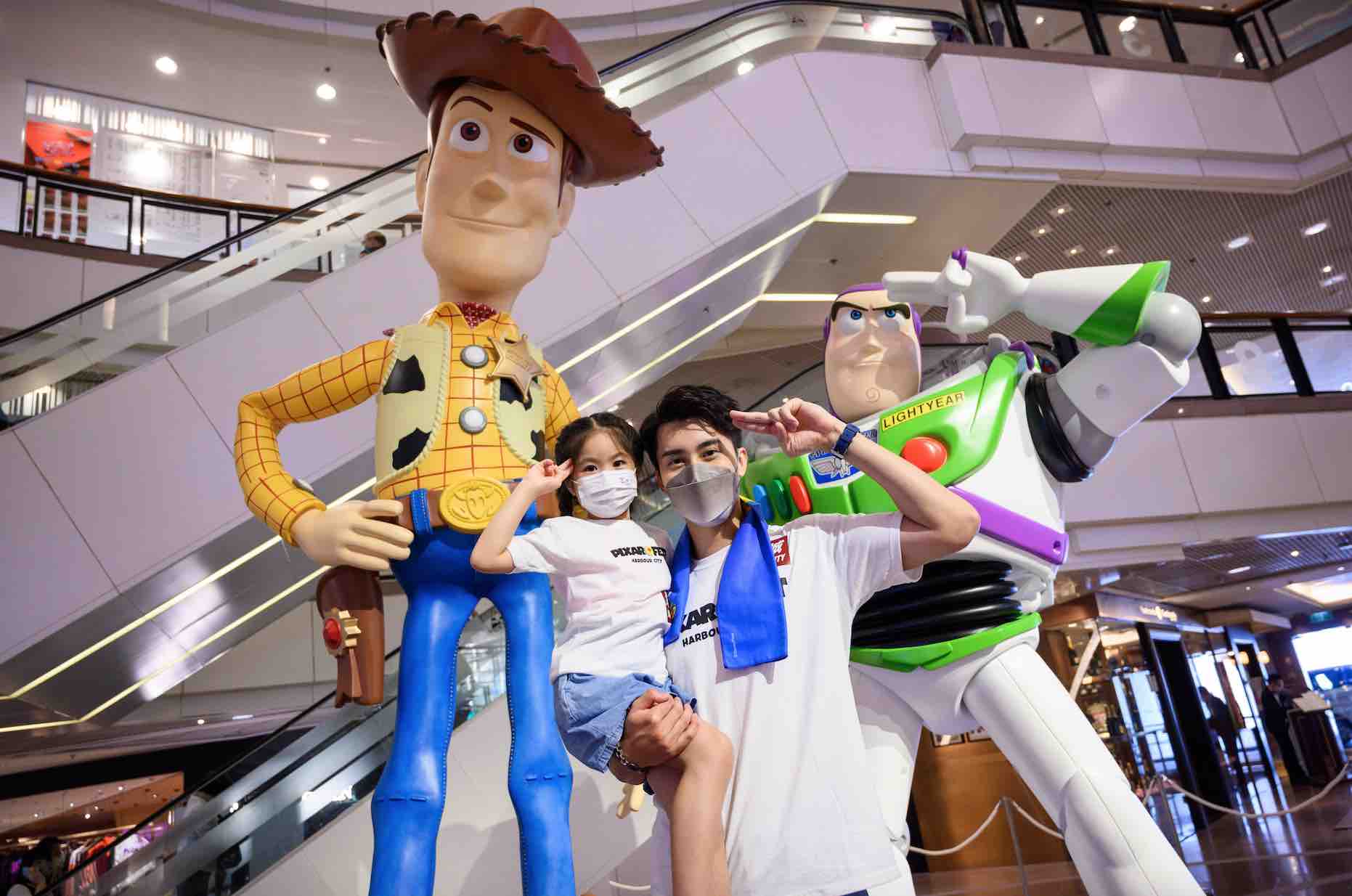 In addition, simply by checking in on social media at designated photos spots on specified dates, you may stand a chance to win themed gifts of respective movies! Gifts are available on a first-come-first-served basis. Make sure to keep up with the flash announcements on our official social media!

Apart from taking pictures on-site with the movie characters’ statues, you can also capture the hidden characters through augmented reality (AR) at 5 checkpoints, including Finding Dory, Incredibles 2, Monsters University, Toy Story 4 and Up. Immerse in the world of Pixar’s animations by downloading the mobile app “Harbour Cityzen” for free, turning on the “AR Fun” camera, and scanning the movie logos to trigger the characters to show up! Then you can take pictures with them just as you are in the movies! 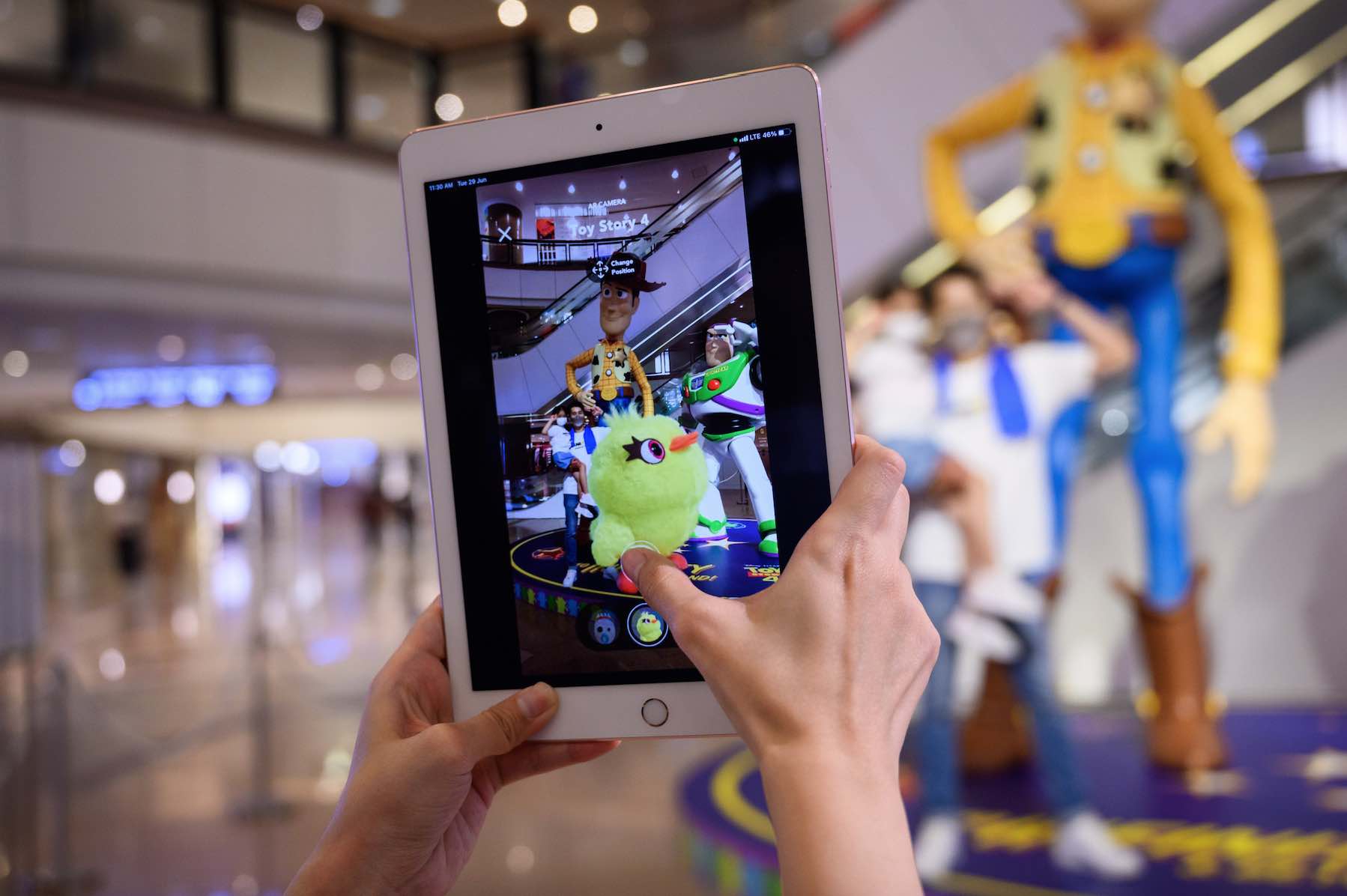 AR Photo Check-Ins to look out for:

Besides physical photo spots, Pixar Fest is also bringing you the screenings of selected movie clips! Harbour City has hand-picked the iconic scenes from Ratatouille and WALL•E complementing the 3D decorations, putting you in the middle of the movie scenes.

Outside the window at the zone of Ratatouille is the beautiful landscape of Paris. And there is a 3D kitchen for your “secret cooking lesson” to become the best chef in town! The zone of WALL•E is decorated in the theme of dumpsite on Earth and space. Come and embark on a mission to bring lives back onto the Earth with WALL•E and Eve! Grab the time to take snaps at intervals!

In addition to the feature films, Pixar has also created numerous Pixar Shorts which are very familiar to the fans. Come and enjoy these creative theatrical shorts! 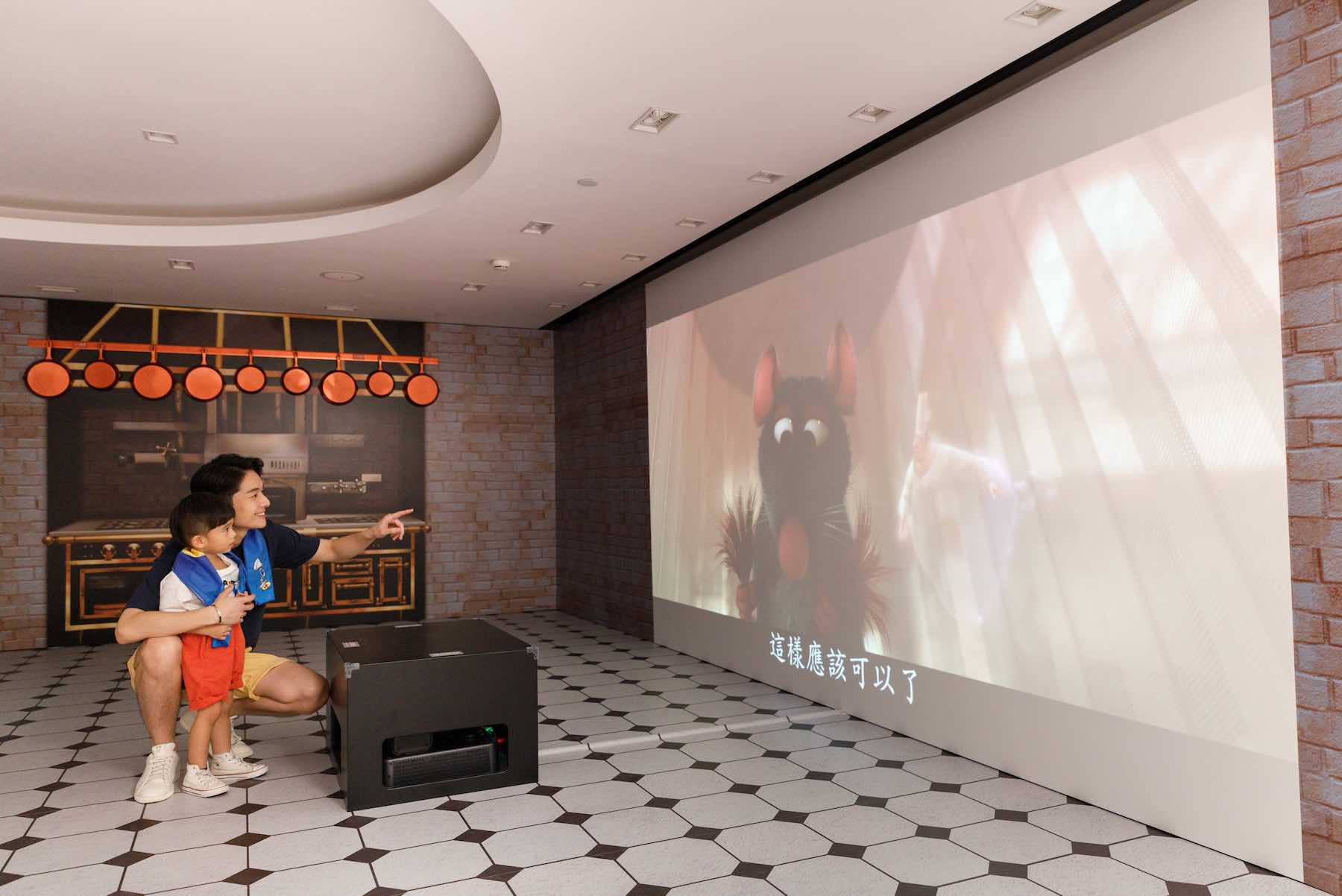 1. Discover Your Soul and Take Pictures On-Site Together

In Soul, Joe accidentally discovers that new souls need to undergo training at The Great Before and search for its spark. Within the campaign period, you can create your own little Soul and share it on social media platforms. Your Soul will appear on the big screen on-site along with others as well! Scan the QR code and find your Soul back! Professional shooting has been arranged for your picture time together!

Operating Hours of the Screen: 11am – 8pm 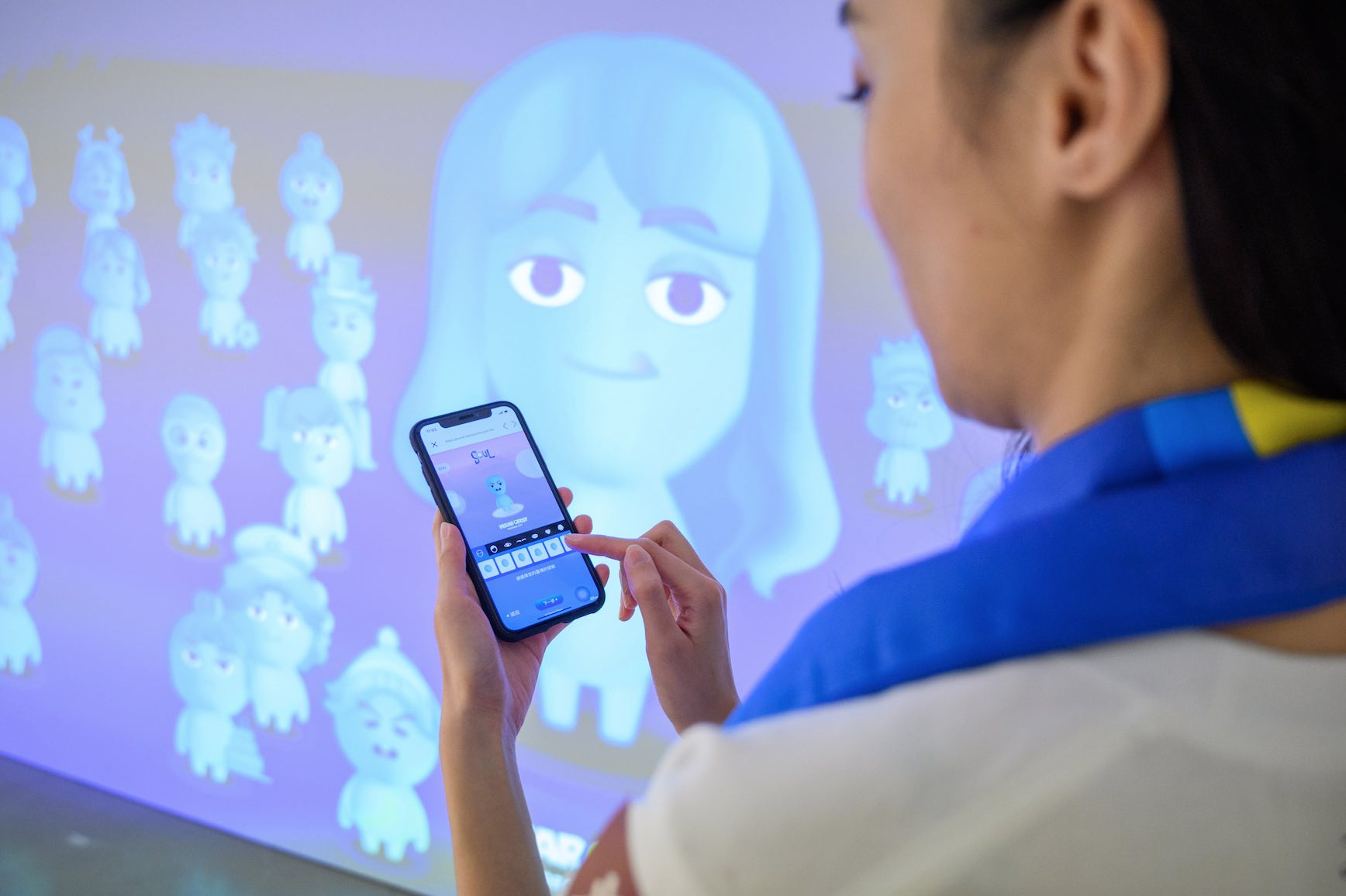 2. Express Your Mood at the Emotion Headquarters

While adults tend to share their moods with others on social media, kids can share how they feel at the checkpoint of Inside Out! Just as each character represents a specific mood in the movie, you can pick the respective character’s sticker and put it on the wall! 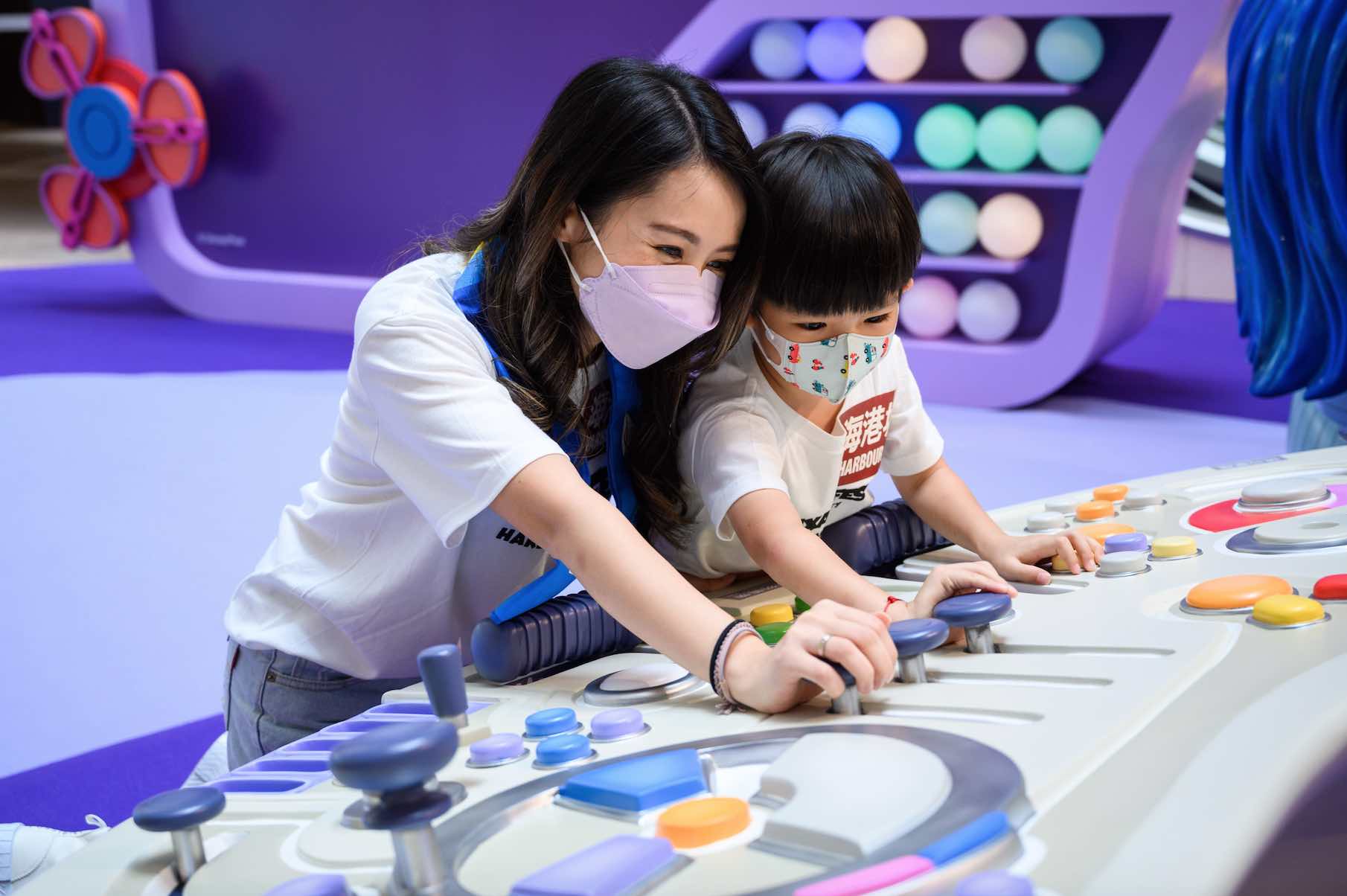 The legendary Lightning McQueen is back on track. Come and practice the twists and turns with McQueen at the track! Enjoy the Remote Control “Cars 3” Lightning McQueen Turbo Racer test drive*. Besides the race, kids can get on the McQueen toy cars for photos and be the new legendary racer on track!

Remarks: The game is for kids aged 12 or under. Sessions will be set up while quota will be arranged on a first-come, first-served basis. 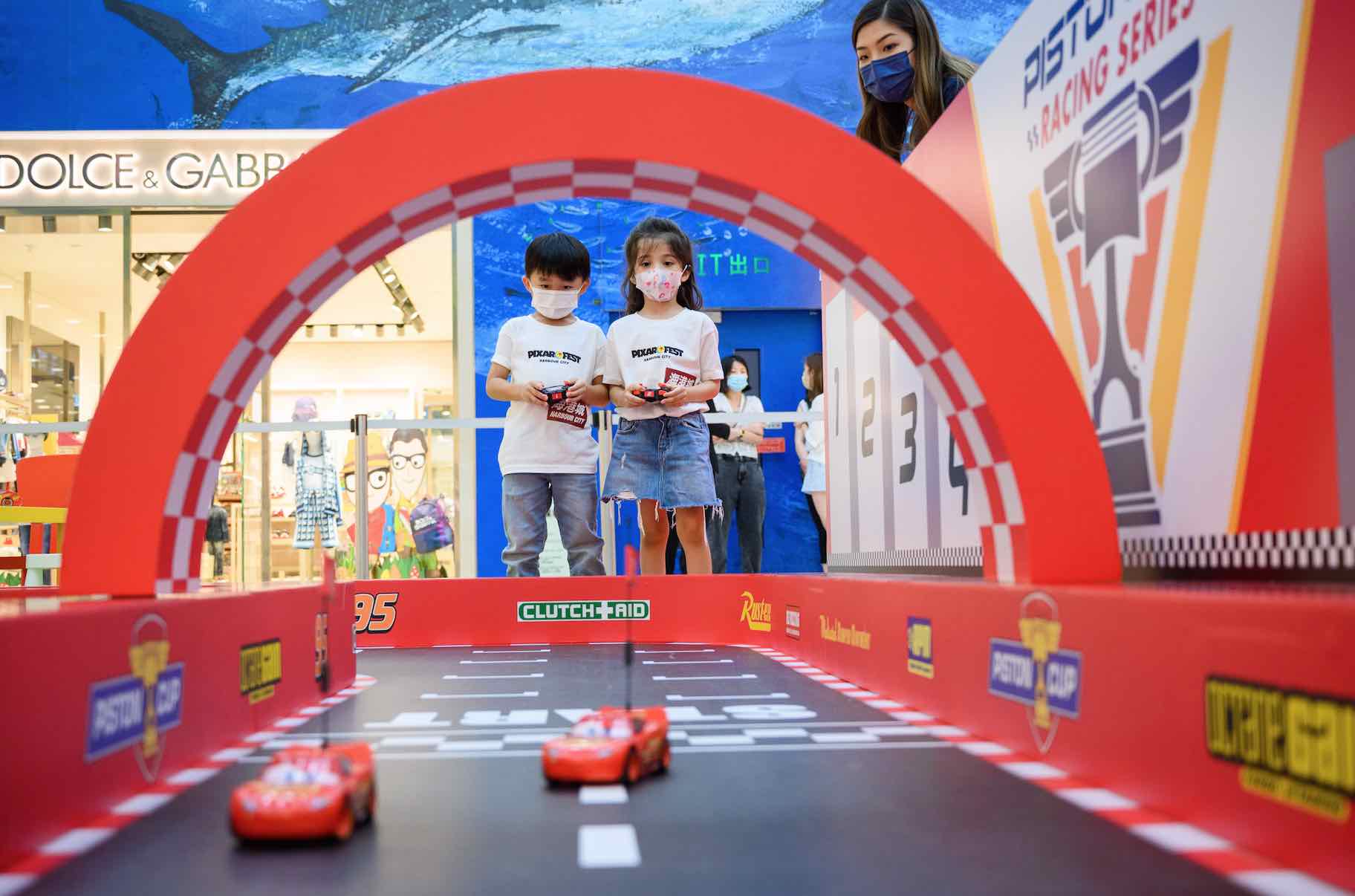 4. Go Across the Land of the Dead with Miguel

An aspiring young musician, Miguel, is accidentally transported to the Land of the Dead and comes across his skeletal ancestors. Bring your family members to capture the family portrait with Miguel in this magical land, and surprises may appear behind you! 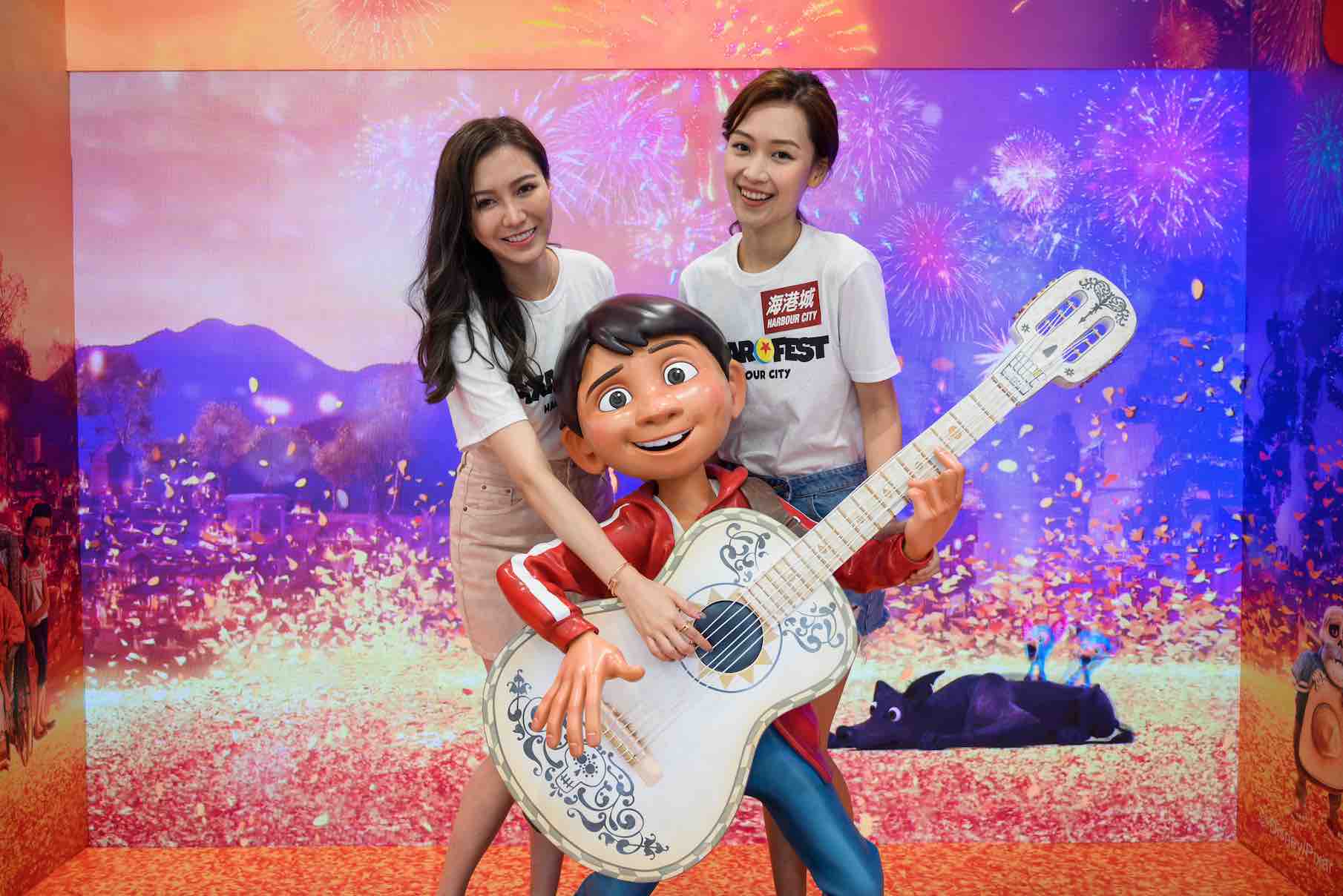 To complete your movie journey with a perfect touch, Harbour City has two routes planned for you. Each Pixar character has its own traits. Have you ever thought of being or feel connected to one of them? You can join the “Which Pixar Character Are You?” Personality Test to discover the Pixar character in you! In addition, you can get a Pixar Fest Postcards Set (total of 12 Postcards), travel around the mall to all Embossing Stamp Station Hotspots to emboss and collect commemorative stamps on different postcards for memories. Upon completion of the route(s), you can redeem extra Pixar premiums! 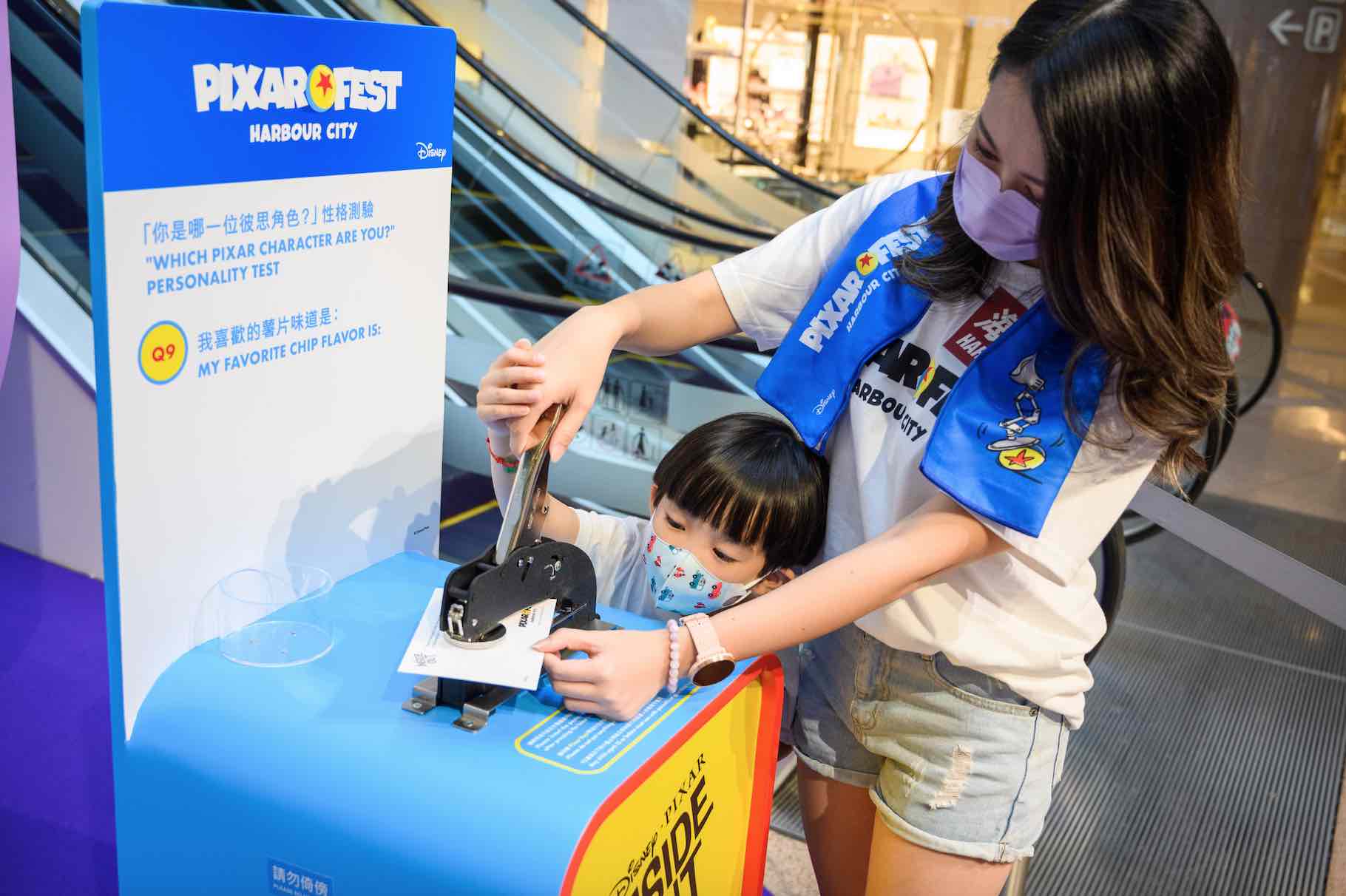 6. A Wide Variety of Merchandise Available To Bring Home

Pixar Fest Pop-Up Store will be selling over a thousand Pixar Movies-Themed Merchandise, including figures, tableware, tote bags, T-shirts and a series of Hot Toys Toy Story Cosbaby And CosRider, along with sweets made by Kingsley Desserts & Gourmandises to keep you cool for the summer. Moreover, there are various photo-taking spots including a Jumbo Size Lotso CosRider!

In addition, customers with spending of HK$200 or above at Pixar Fest Pop-Up Store can present the original same-day receipt to redeem a pack of Toy Story Cosbaby Stickers at Hot Toys Rebel (Shop 4017, Level 4, Gateway Arcade) and enjoy 5% discount for the Cosbaby series. First-come-first-served, while stock lasts. Don’t miss it! 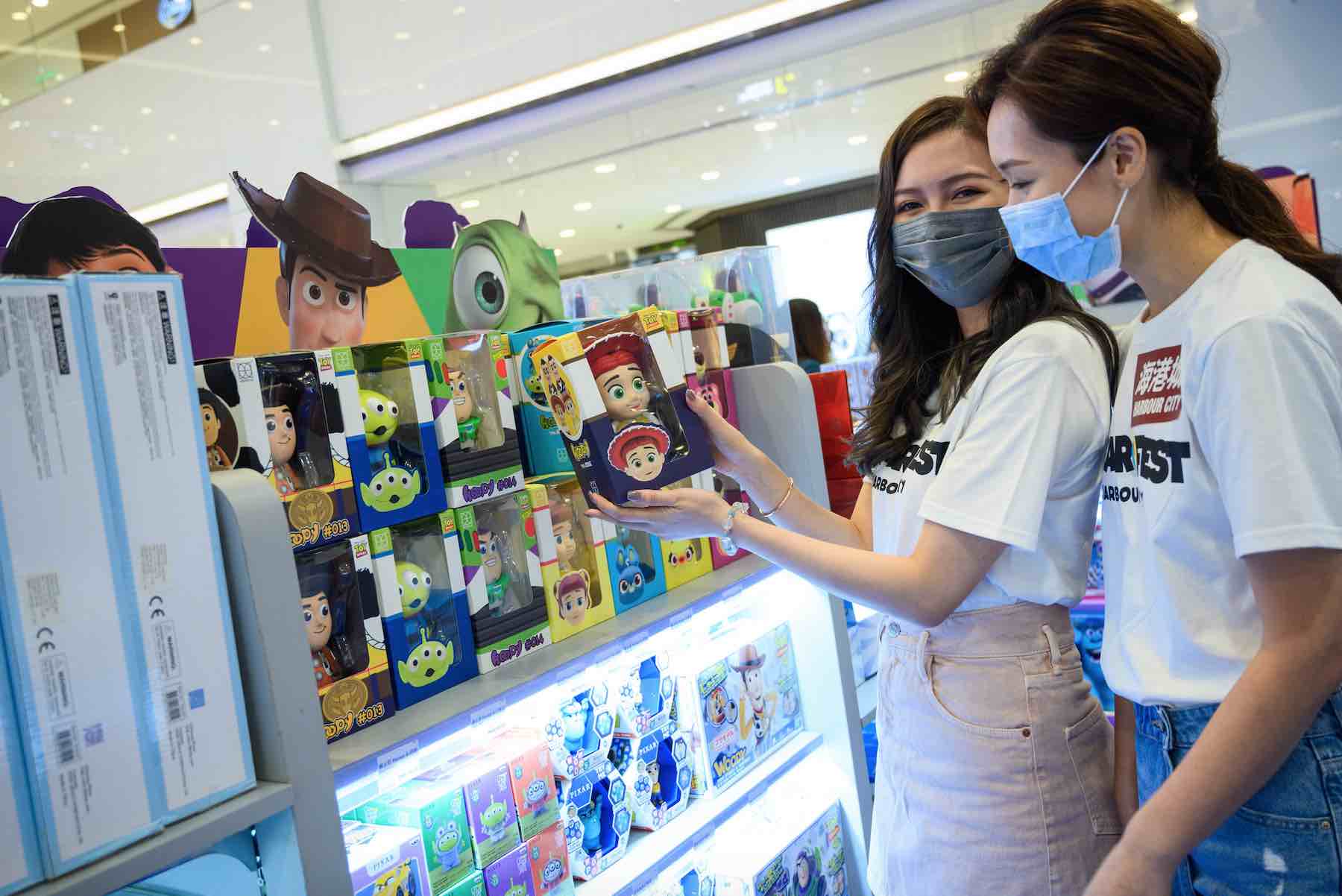 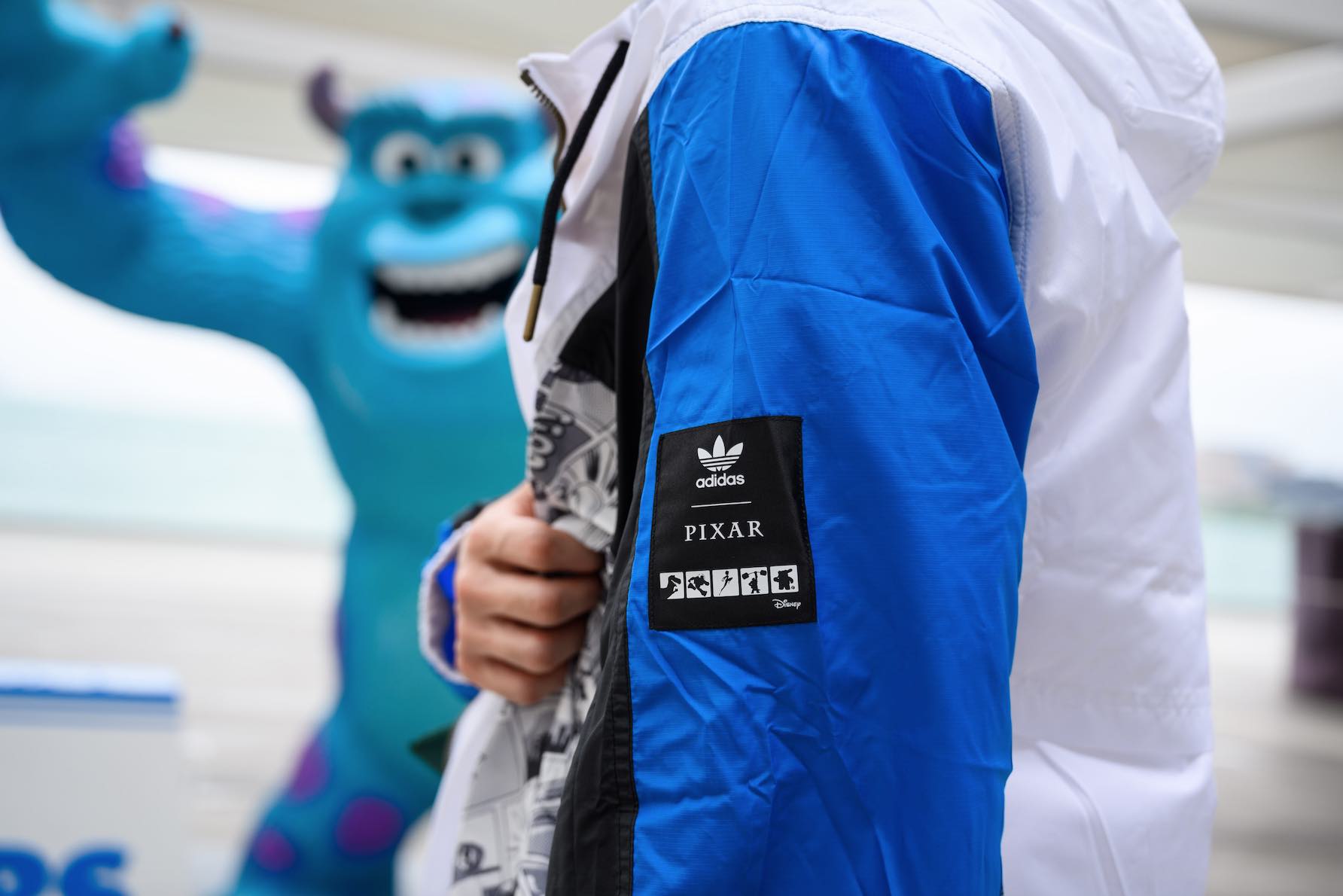