Attention all burger-lovers, cult-favourite American burger joint, FIVE GUYS Singapore just opened its first store at Plaza Singapura on 16 December 2019 in an unmistakably FIVE GUYS style, ready to serve up what FIVE GUYS does best – freshness and quality. The Singapore store is the global burgers and fries joint’s first franchise in Asia, and the latest addition to Zouk Group’s growing food and beverage portfolio as part of its lifestyle expansion plans. 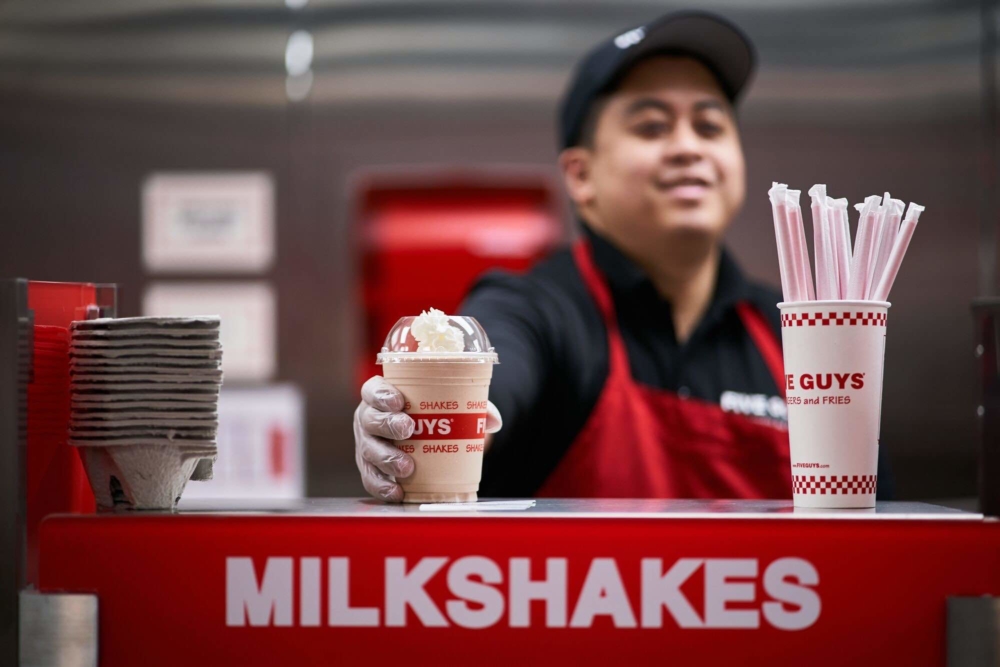 Occupying a space of over 460 square metres, the outlet at Plaza Singapura is located along a prime stretch on the ground floor of the mall overlooking the Orchard Road belt. Currently comprising an indoor area that seats up to 52 patrons, the store will eventually also house an outdoor seating area that will increase the outlet’s capacity to accommodate up to over 160 patrons.

“After many months of planning, we’re thrilled to finally unveil the very first FIVE GUYS store in Singapore. FIVE GUYS is an exciting addition to our portfolio, and we were fortunate to be presented with an opportune space in the city that is highly accessible so that fans of FIVE GUYS can come together to enjoy their favourite burgers with ease. This first outlet will be the bedrock upon which we grow the brand in Singapore, and we look forward to more to come,” says Andrew Li, Chief Executive Officer of Zouk Group. 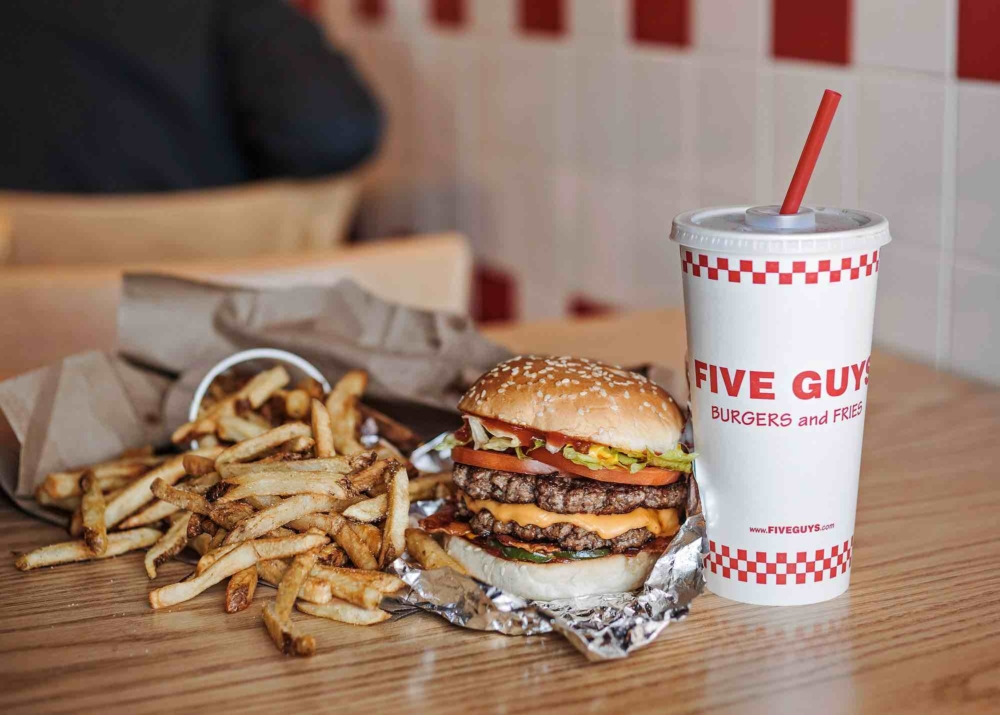 FIVE GUYS is a family run burgers & fries joint offering a mouth-watering menu made from scratch. FIVE GUYS has been a Washington, D.C. area favorite since 1986 when Jerry and Janie Murrell offered sage advice to three of the Murrell brothers: “Start a business or go to college.” The business route won and the Murrells opened a carry-out burger joint in Arlington, Virginia, USA. Under the guidance of Jerry and Janie, the little burger joint quickly developed a cult-like following. Customers voted the burger “#1” in the D.C. metro area.

During the 1980s and 1990s, the Murrells perfected their simple concept. FIVE GUYS became The Place to get a fresh, juicy burger with all the toppings you could stuff between two fresh-baked buns. Two more brothers joined the team and as the family grew, so did the business. Early in 2003, Jerry and Janie, together with the “FIVE GUYS”, began offering franchise opportunities. In just under 18 months, more than 300 units had been sold.

Now, decades after FIVE GUYS first opened, there are locations across North America, Europe, the Middle East and Asia, with planned expansion into Australia, Africa, Central and South America. By maintaining a simple ethos, coupled with the highest quality, the Murrells continue to follow through on the vision they outlined in 1986. 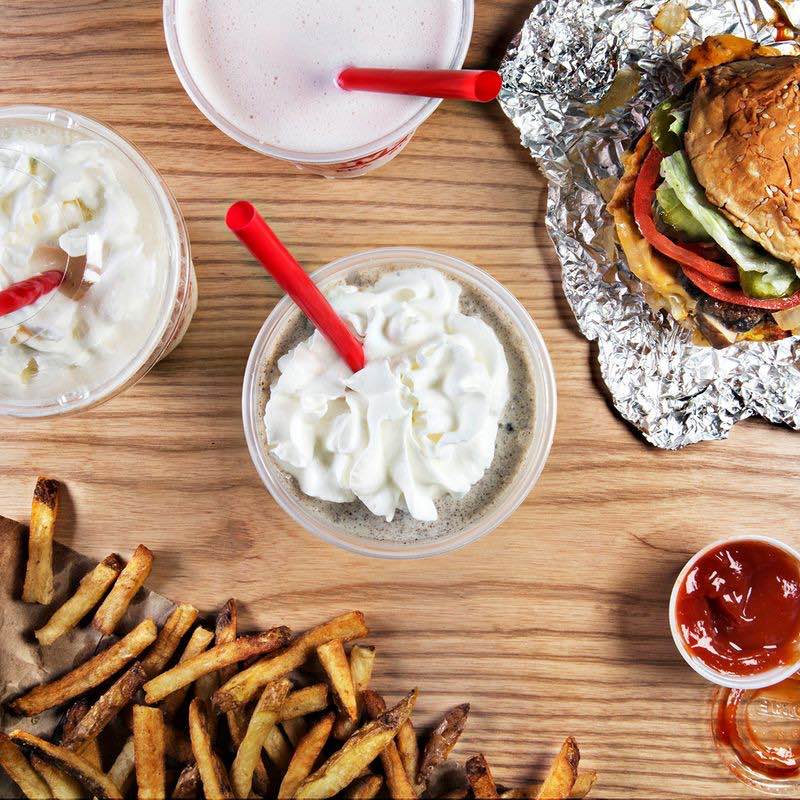 FIVE GUYS’ mission is to redefine the global burger landscape by focusing on freshness and quality. ­­­­­ With no freezers and no microwaves, it is built on the premise that all burgers and fries are made fresh every day. The meat is a perfected 80/20 lean-to-fat ratio. Patties are hand-made seven days a week on site. The bread, which is FIVE GUYS’ only proprietary item, is baked fresh five days a week in a locally contracted bakery.

The same unique recipe is used globally. Potatoes are cut fresh daily, soaked to remove the starch and double-fried in pure, no cholesterol peanut oil to create the firm exterior and fluffy ‘mashed-potato’ interior that FIVE GUYS fries are known for. 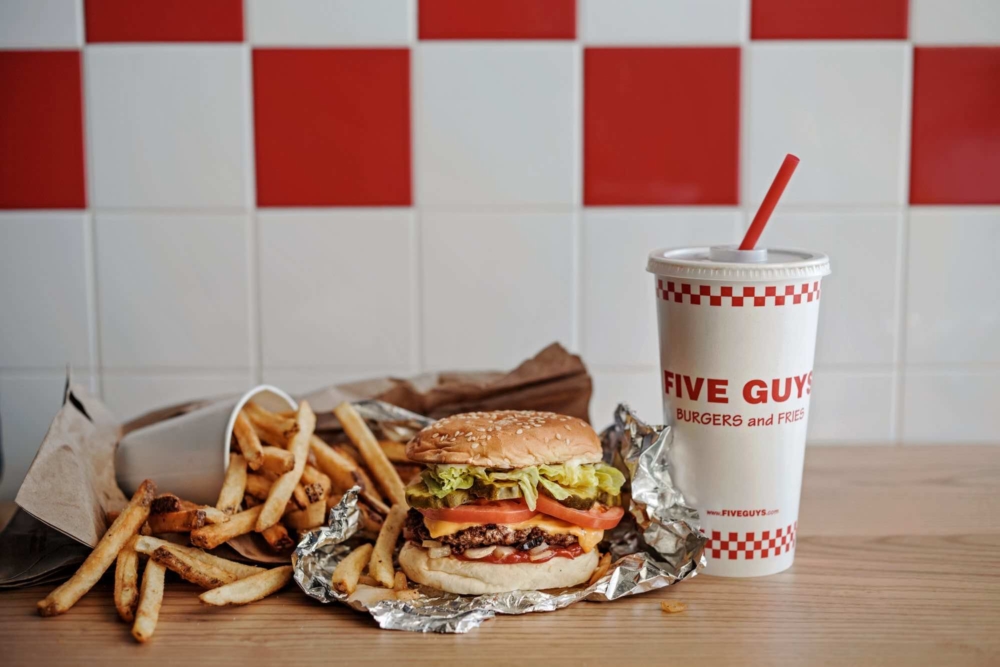 2015: International expansion speeds up with locations in the UAE, KSA & Ireland. FIVE GUYS opens its International HQ in Amsterdam, Netherlands.

2010: The first location in Canada opens in Alberta.

2009: FIVE GUYS has over 500 locations across the United States.

2003: FIVE GUYS sells out of franchise territory in Virginia, Maryland and Washington DC within 18 months and starts to open the rest of the country for franchise rights.

2001: FIVE GUYS expands to 5 locations around the DC metro-area – and starts to build a cult-like following. 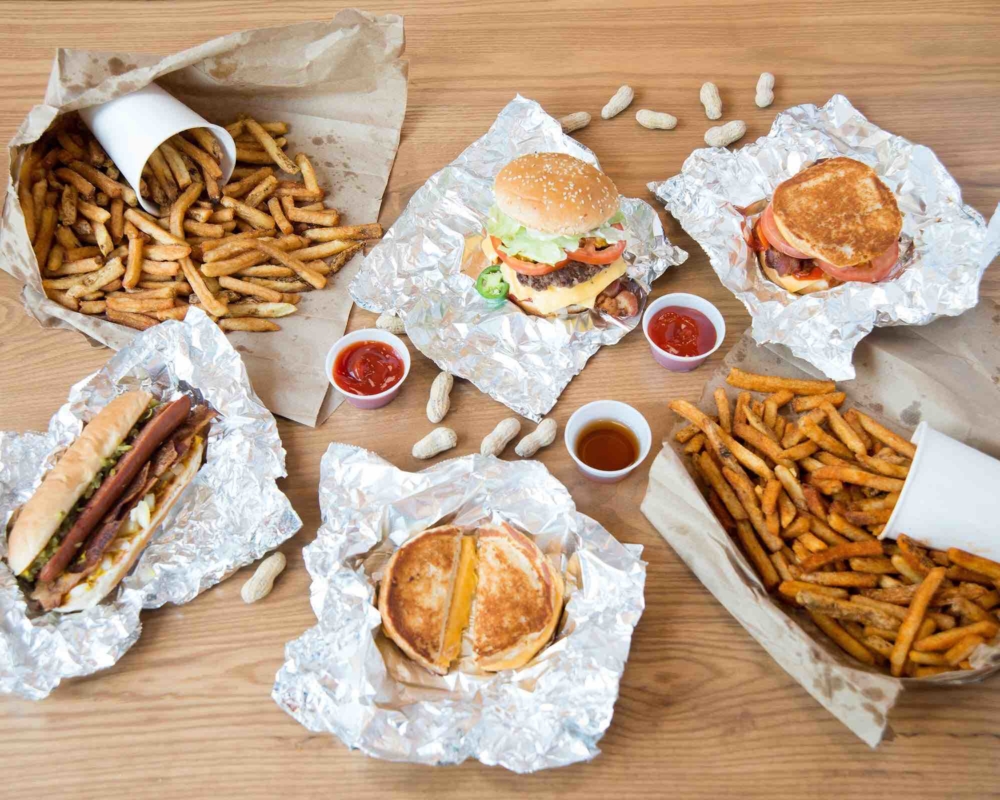 Customers pay for the basics and FIVE GUYS offers 15 free toppings plus bacon and/or cheese to add to the burger or hotdog selection. Other sandwich options include a BLT stacked high, creamy grilled cheese, veggie burger sandwich with or without the bun, lettuce wraps and burger bowls. With 15 free burger toppings, the FIVE GUYS combinations are endless 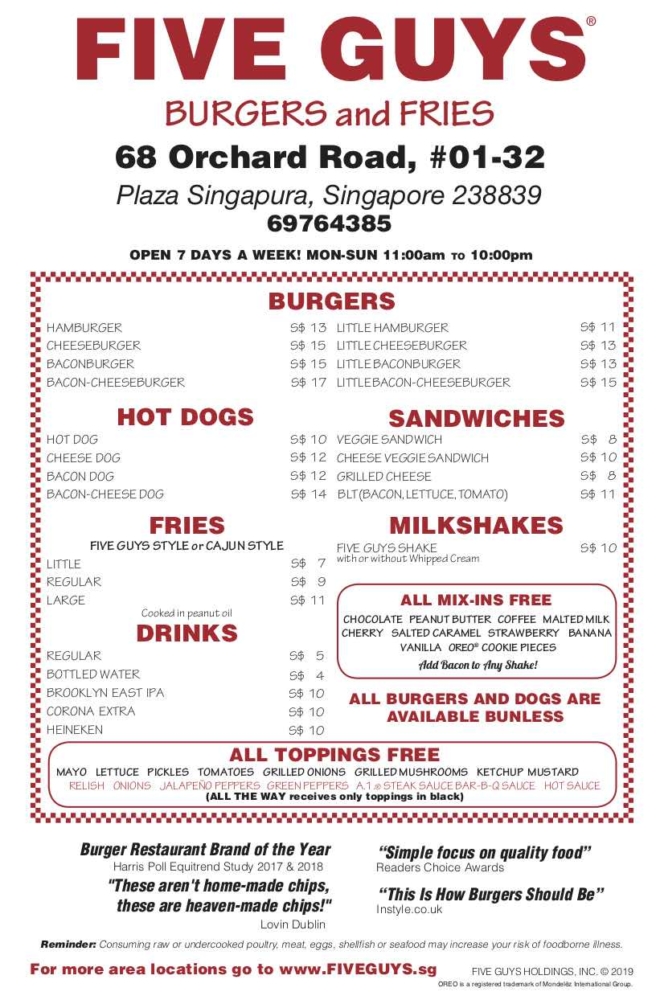 Burgers: FIVE GUYS burgers are made with only the highest quality and freshest ingredients. Hand-formed burger patties with no preservatives. Buns are baked fresh daily with a secret recipe and warmed on a dedicated grill to get the perfect toast.

Hot Dogs: All-beef hot dogs, split and grilled lengthwise for a caramelised exterior. With the added option of melted American-style cheese, crispy smoked bacon, or both.

Fries: Fries are hand cut daily, cooked in peanut oil and made boardwalk style, firm on the outside with a creamy, mashed potato filling. Get them the traditional FIVE GUYS way or try them with spicy Cajun seasoning.

Shakes: FIVE GUYS shakes have a creamy, vanilla base. Customise them by adding one or more of the eleven premium mix-ins like crispy bacon, real bananas, fresh strawberries or cold-brewed coffee made daily in store. 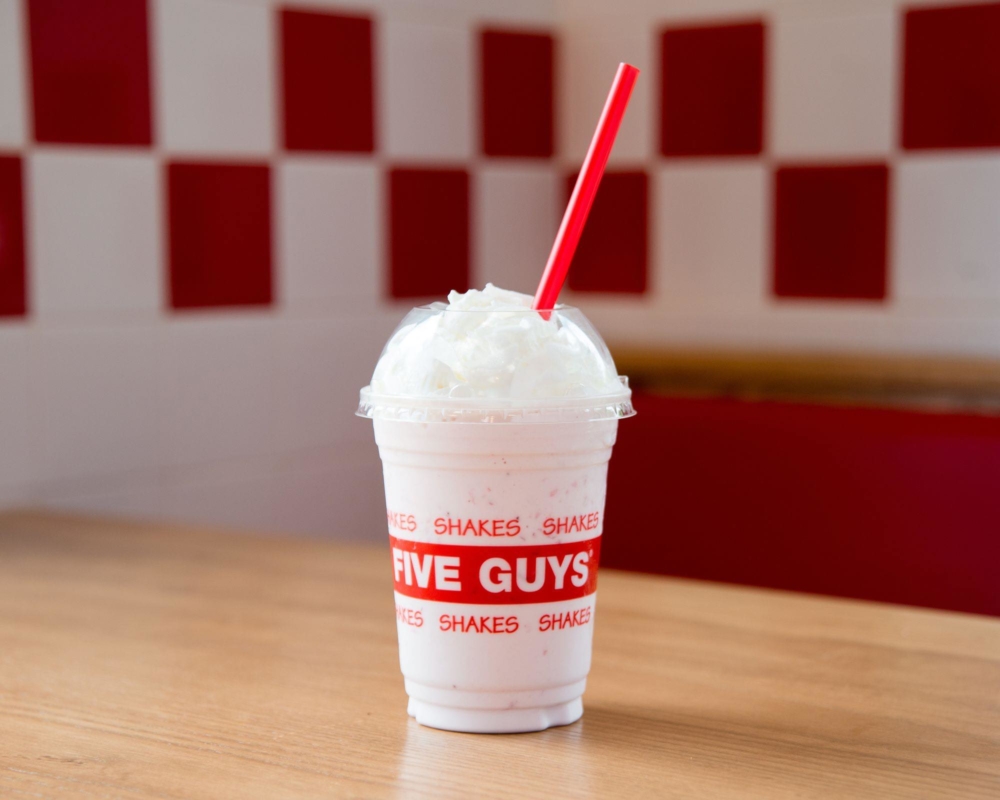 FIVE GUYS wants every employee to feel personal ownership for their store. Professional teams train staff on what perfection looks like in store. Mystery shopping takes place in every store twice a week (lunch and dinner) to measure how staff are doing and reward success.

The goal of the program is to create a sense of ownership with each employee.  It rewards the best marketers, the crew, for taking ownership of what happens in the store. The program also offers a very important customer perspective of restaurants on an on-going basis and is a valuable training tool for crew members, managers and franchisees. 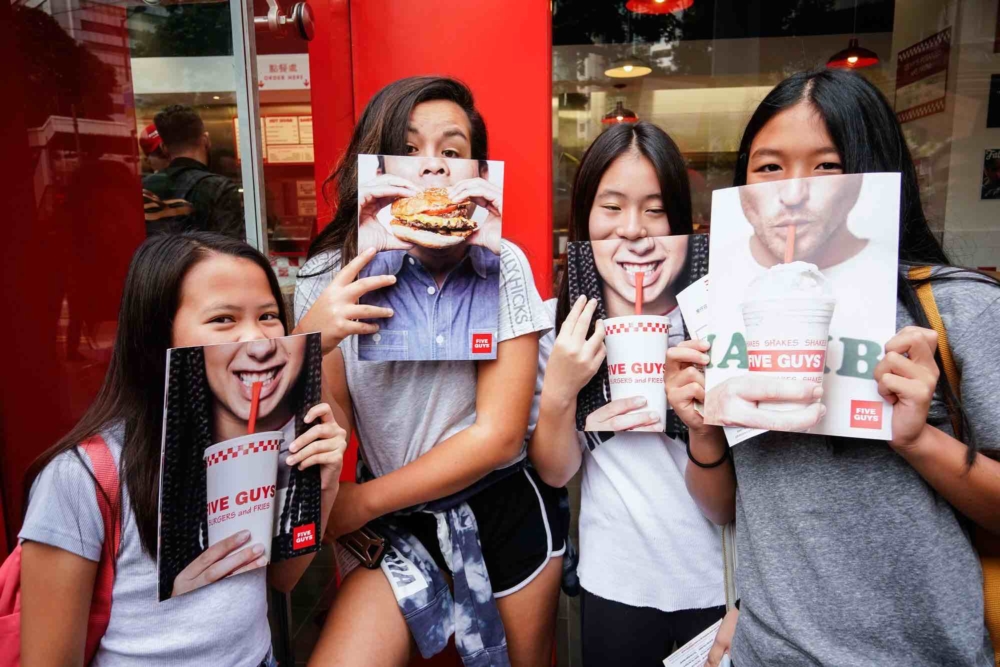 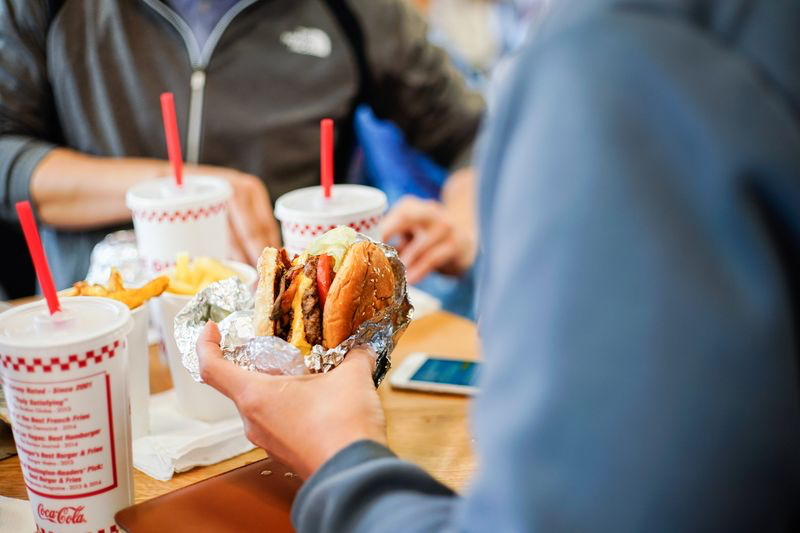