After weeks of brainstorming and preparation, Night Safari’s Art Seen & Herd! exhibition was officially unveiled to the public yesterday, in celebration of World Environment Day. Visitors to Night Safari were treated to a visual bonanza as four of Singapore’s street artists unleashed wild artworks inspired by threatened animals to spread awareness about poaching and the dwindling wildlife population. 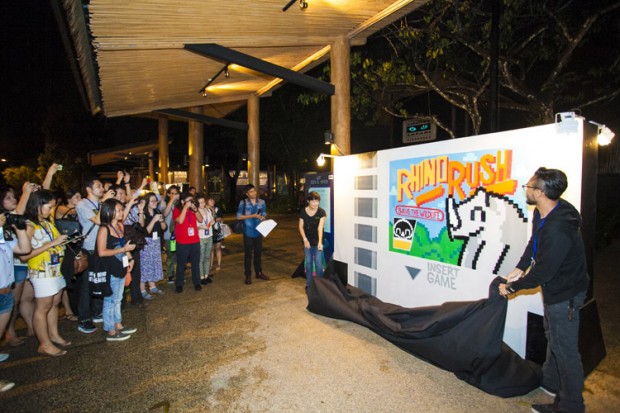 The four artists – Michael Ng (‘Mindflyer’), Samantha Lo (‘SKL0’), Luthfi Mustafah (‘The Killer Gerbil’) and Eman Jeman (‘ClogTwo’) – also shared the inspiration and ideas behind their works, as well as the conservation messages that they hope to convey to visitors. Animals featured in the exhibition are often hunted and farmed to feed continuing consumer demand for animal parts for use in traditional medicine, despite the presence of synthetic substitutes or there being no real evidence of the efficacy of these treatments.

Enough said, let’s check out the creative works from our four artists: 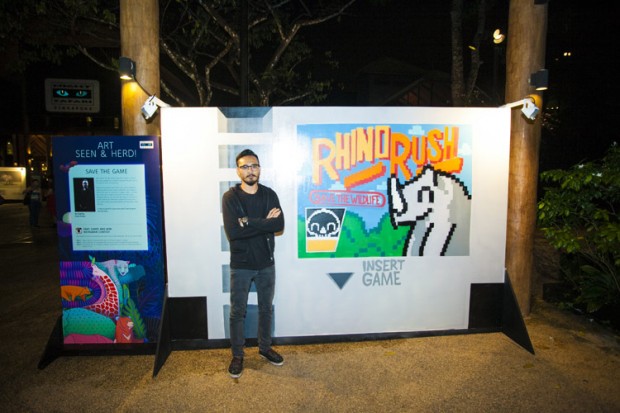 Like a game, the fate of the Indian rhino results in a win or loss. Long regarded as a symbol of strength, the rhino horn is ironically the bane of the animal. Rhinos are hunted for their horns to be used in traditional medicine. In actual fact, the rhino’s horn is made up of keratin, the exact same substance that our hair and nails are made of, and have no proven medical use.

So why not say NO to using animal parts? Save the game, save the rhinos.

It’s simple and does brings back memories from the old days of handheld game. But I personally feel that it is a little too clean and cutesy for street art and perhaps the poor rhino can put on a little frown. It seem to be rather pleased with its plight.

A whimsical artwork with a message of hope and courage. A group of tiny spacemen are busy at work, trying to free a helpless Asiatic black bear from a bear bile farm by cutting off the chains and attaching wings to help it fly away to safety. 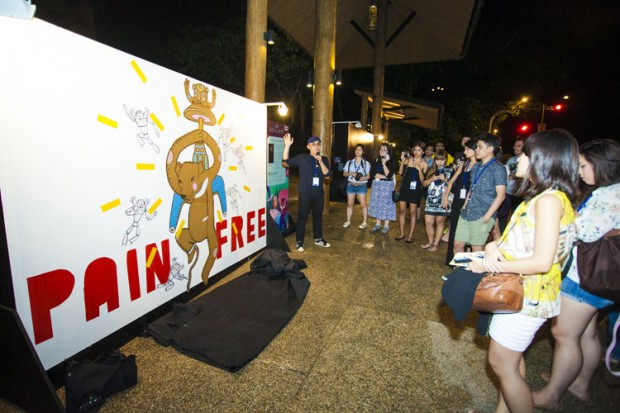 Imagine being trapped and housed in a tiny, restrictive ‘crush cage’, tortured by pain and insanity to get your bile juice extracted daily from a thick needle inserted into your abdomen, all in the name of ‘traditional medicine’. This bile-drawing process is painful, stressful and cruel. Will you be able to bear with this?

Say NO to using animal parts and help keep their lives bearable.

A highly imaginative piece of art which introduces frictional tiny spacemen into the photo. Not exactly an easy artwork to understand without further reading.

3. TURN A BLIND EYE by Luthi Mustafah (‘The Killer Gerbil’) 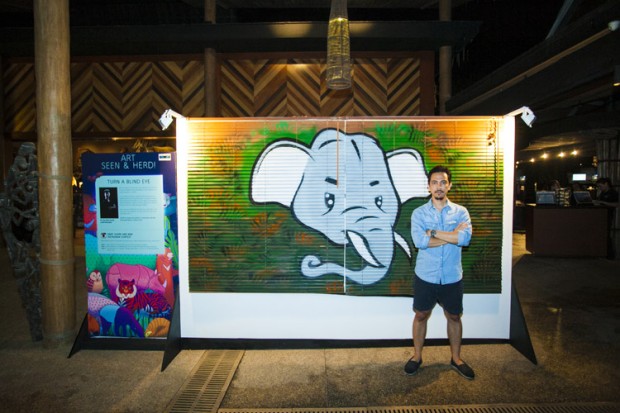 With the endless hunt for their ivory tusks and loss of natural habitats through deforestation, Asian elephants are rapidly depleting in numbers. In this interactive artwork, wooden blinds form the canvas representing the once sprawling woods the elephants inhabit.

Turning the blind first reveals a cry for help for the elephants before ending with a solemn and dark ending for the elephant from the loss of its tusks and natural habitat. This is a grave reminder for us not to turn a blind eye to the dire state of the elephants. 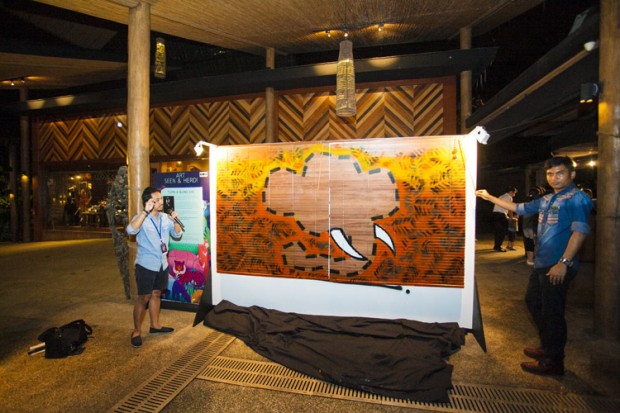 The ivory trade must stop and it must begin with us.

Say NO to buying ivory products and give these gentle giants a chance to live.

The drawings and text was nothing to wow over but the use of the blinds was a pretty interesting way to narrate a story.

‘Bai Swee’, in the Hokkien dialect, means ‘only for show or display purposes’. Which leaves us to think, what is real anymore?

The once majestic Malayan tigers are now merely puppets of the human race. As their strength and dominance in this world wane, we can only see their former selves portrayed and kept alive by their human keepers. Here lies a grim reminder that we have to work harder to preserve what nature offers or soon we will only have soulless and empty shells of the Malayan tigers. 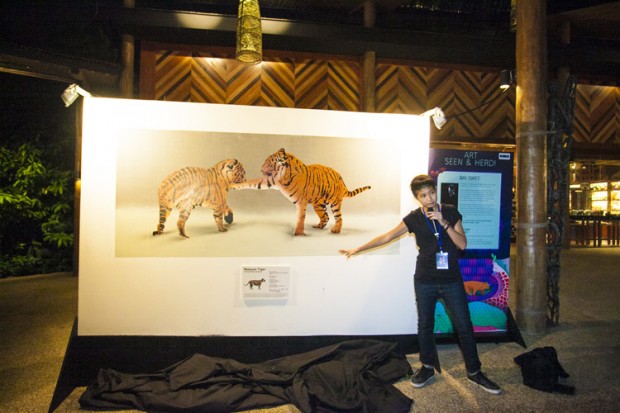 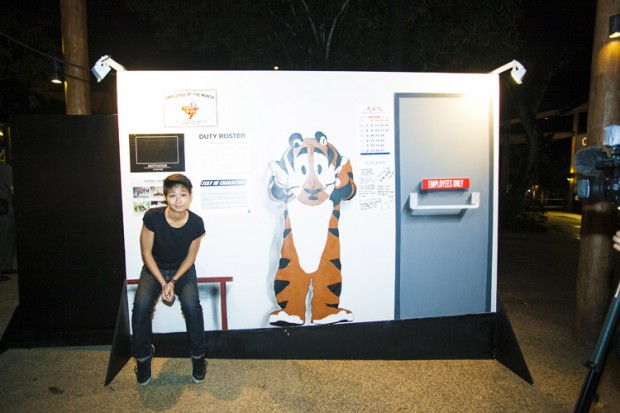 Say NO to using animal parts and help keep these beautiful creatures living in the years to come.

In case you have not been following the news, Samantha Lo is our Little Red Dot’s very own ‘Sticker Lady‘! Besides putting humorous stickers on traffic lights buttons with text like Press once and wait, Press once can already, Press to teleport & Press until shiok etc, she went on to decorate selected roads with text like My Grandfather Road. I really admire her for being about to think out of the box and inject creativity, fun and entertainment into our otherwise stale and boring urban lifestyle. Extremely honoured to have a photo taken with her. 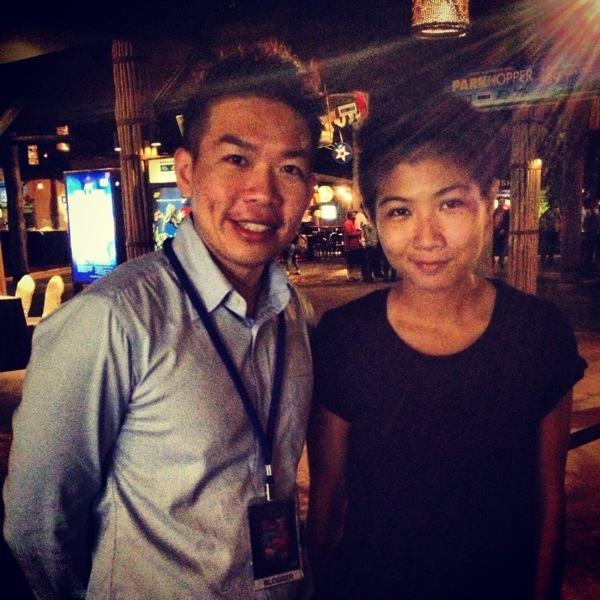 No favouritism (not because I had a photo taken with her), her creation is my favourite piece from the collection of four. I personally feel that the pair of tigers were really life like and by far the most elaborate artwork presented in the exhibition. I would not hesitate to have it hanged on my walls at home. Despite the storyline, I am not that excited about the other side of the artwork which displayed details of the resting area of staff who are ‘faking’ the pair of tigers we saw at the front.

What’s In For Visitors?

Visitors can catch this free exhibition from now till 15 July 2013 at Night Safari’s entrance plaza.

To encourage students to learn more about the threats facing wildlife, Night Safari is offering a 50% discount on admission after 9pm from 1 June to 31 August 2013.

The Art Seen & Herd! project also encourages students to take action by sharing information on the threats facing the animals and what they can do to save these species via popular social media platforms such as Instagram.

More information on the contest and student discounts is available at www.nightsafari.com.sg

You may also like to check out my posts on other exciting travel destinations here.