Many of us have many lofty dreams when we were young. We wished we can be doctors, pilots, police and the list goes on. For our young ones who aspire to take to the skies, the route can be expensive and reserved for only the talented or the wealthy. All that is set to change with Aeroviation Singapore coming into the local scene with its Junior Aviator Program (6 to 11 years old), Young Aviator Program (12-17 years old) and Recreational Pilot Course (15 years old & above). Join us on an exploratory tour at their office to understand how they can help your child take off to their aviation dream! 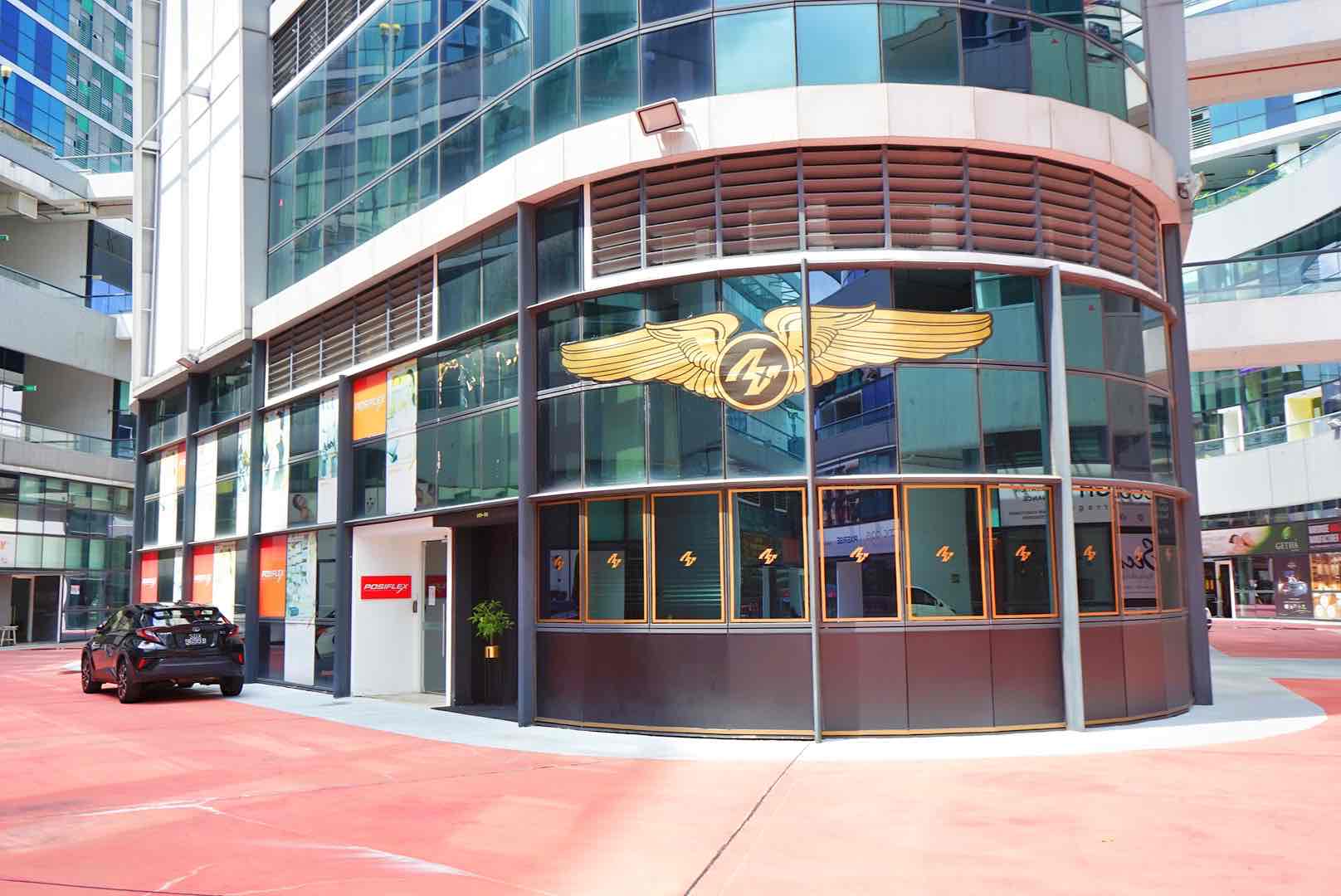 With the global demand for pilots reaching new heights, Aeroviation Co-founder & CEO, Faris Iskandar believes that there has never been a better time for our young ones to start working towards a career in the aviation industry or as a professional pilot. Aeroviation aspires to be an aviation academy that can help aspiring young pilots develop the relevant skills and competencies for a successful career in the aviation industry. 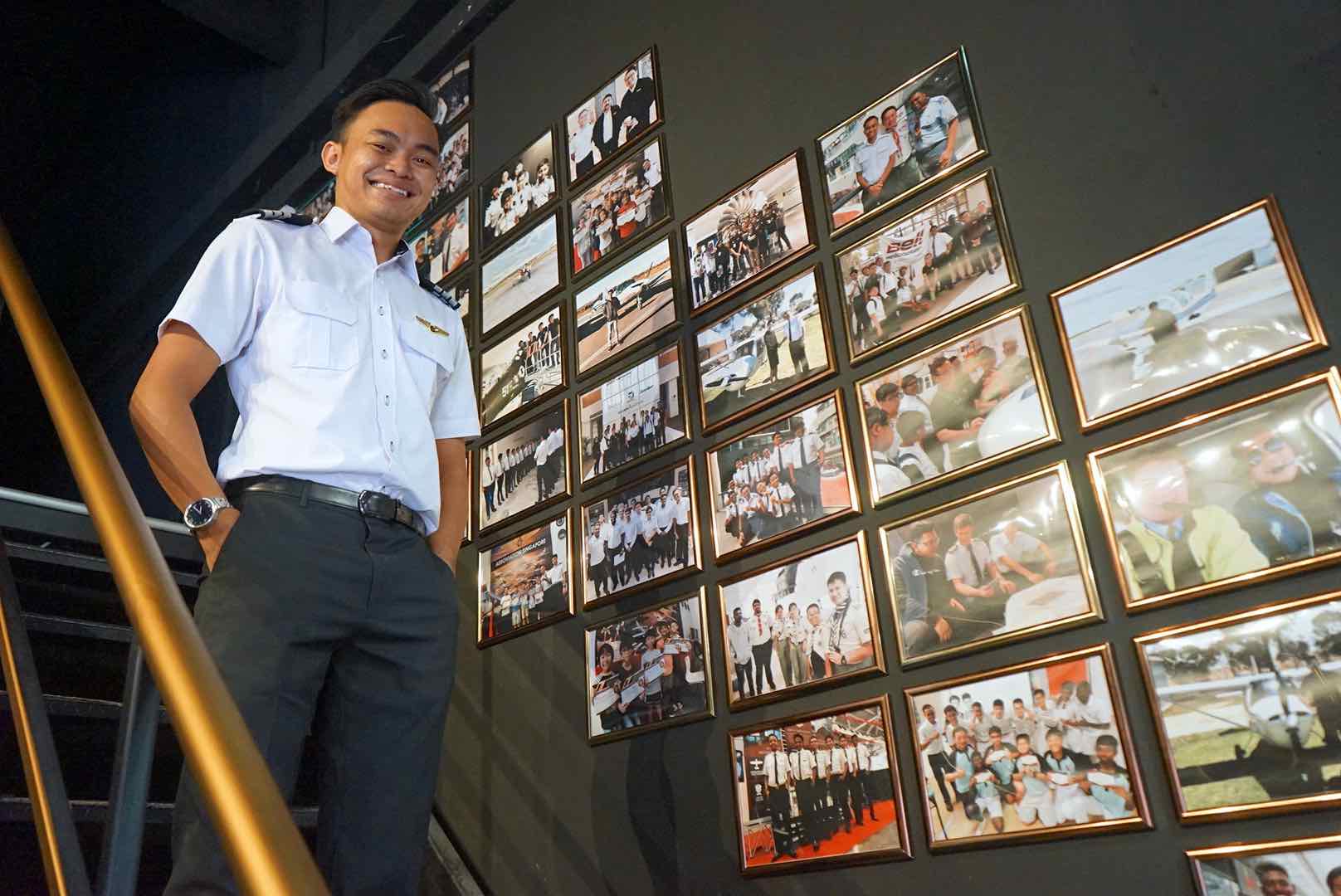 He explained that the existing entry to an aviation career in Singapore can deter many from pursuing their dreams. To get work in an airline, one would need a Commercial Pilot Licence (CPL) which would cost at least $150,000. Aeroviation Singapore with its affordable and time-efficient programmes can help to lower the cost, time and make the dream more attainable for individuals who wish to experience flying and explore the career options that come along with the knowledge and skill. This is the classroom where knowledge will be imparted. 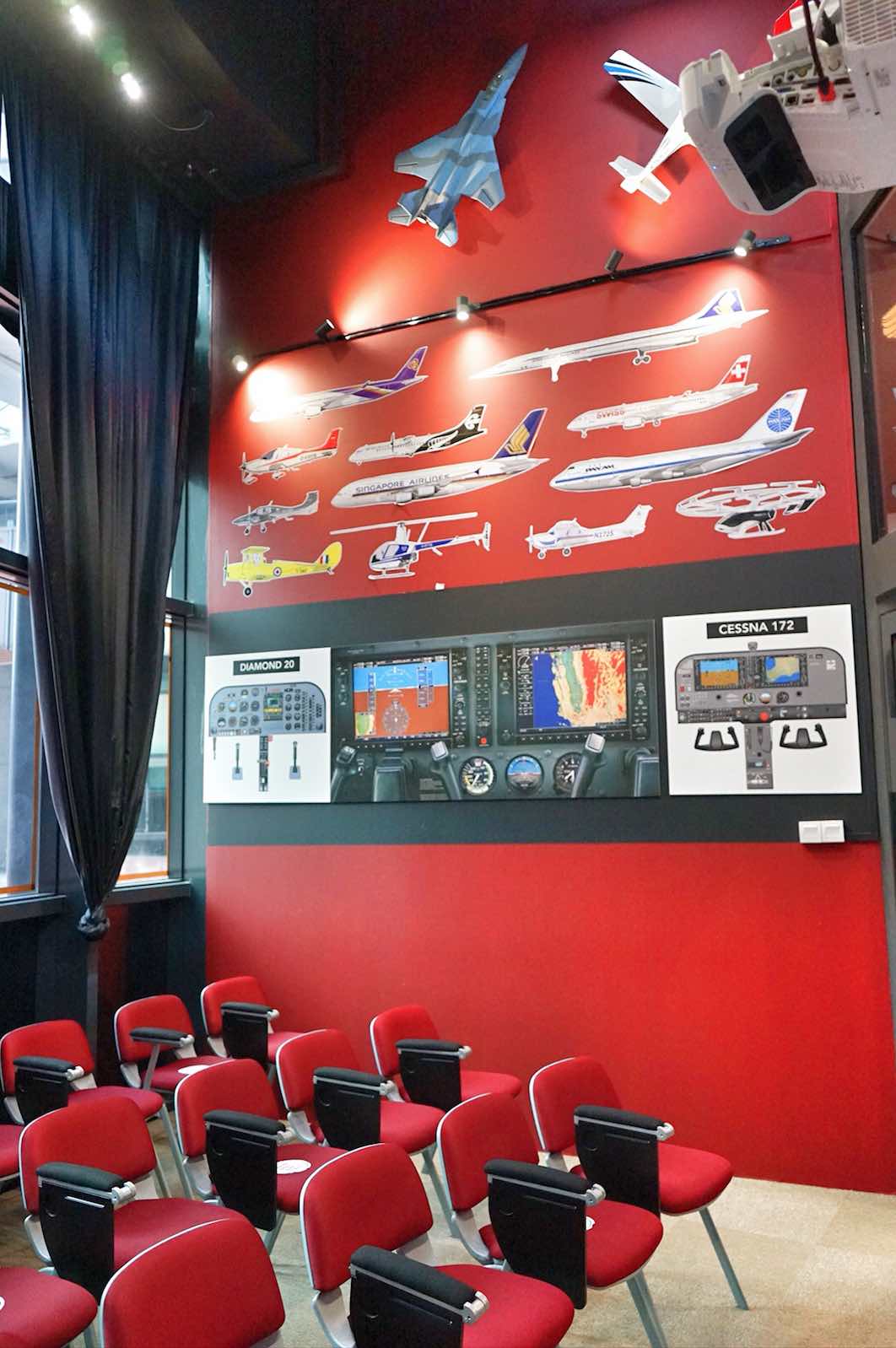 Following Faris up the flight of stairs to our first station of the tour – The Voice Recognition Air Traffic Controller Simulator. 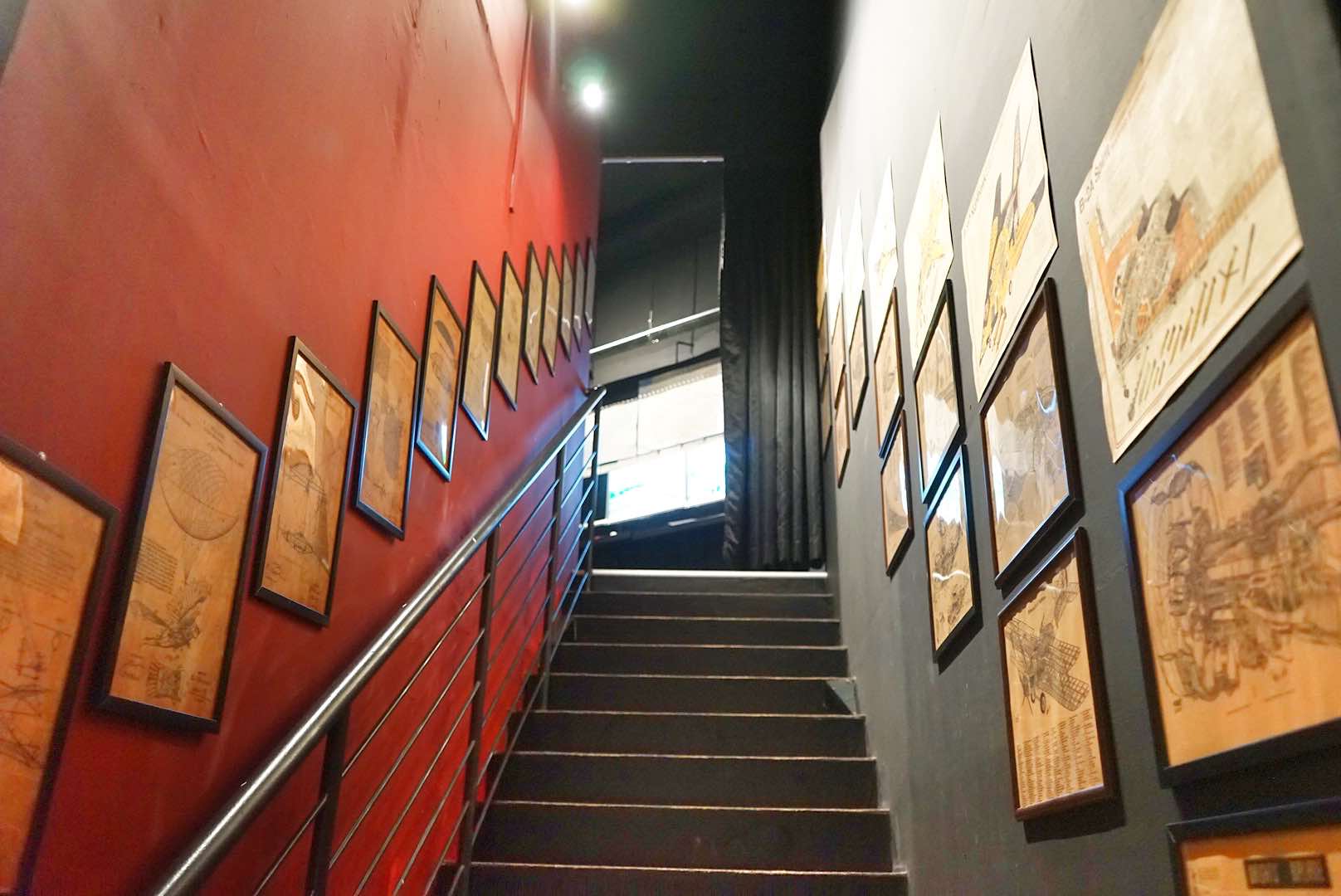 Here we were greeted by a panoramic 3 screens simulator where students get to guide aircraft to and from the active runway for landing and takeoff. As this is a crash course for me, 2 screens were used for an ‘easy’ mode experience. 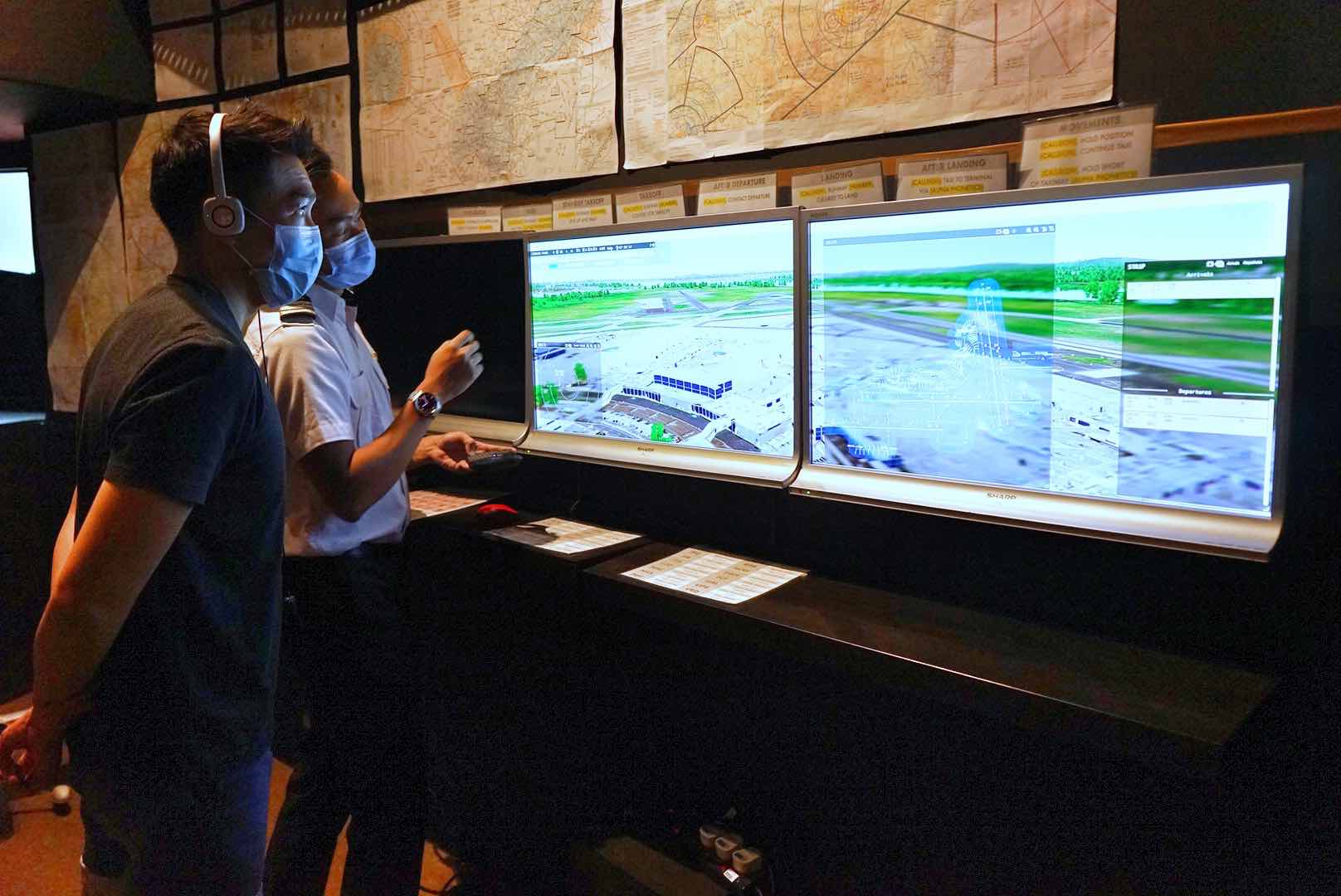 While the screens show flight strips, ground, and air radar screens and a full 3D view of each airport, the simulator is equipped with a complex command structure as well as advanced AI and Speech Recognition technology to capture our spoken command. The command really reminded me of the signal commands I learned during National Service. 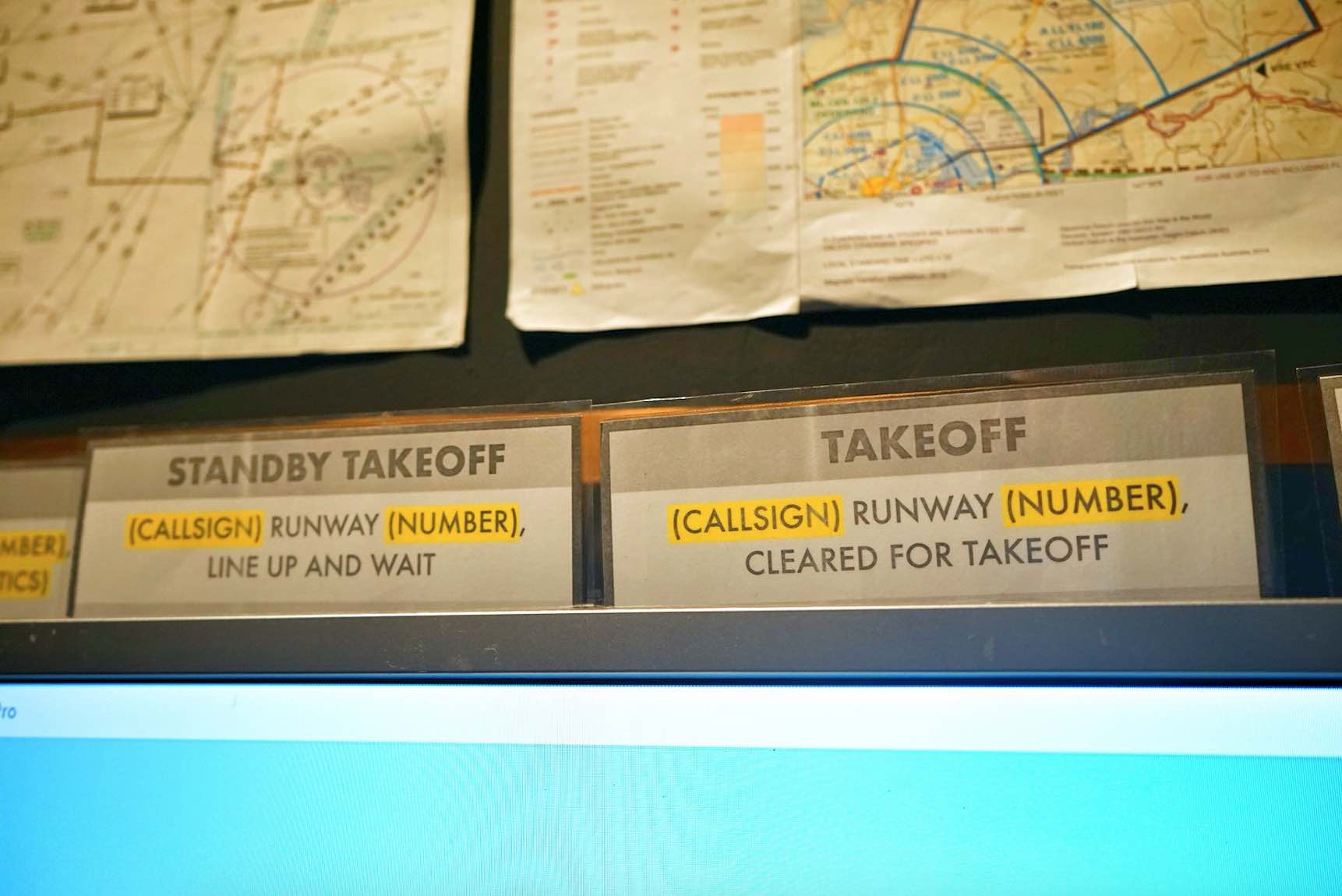 By communicating using these command templates, my mission was to ensure that it safe for a plane to enter or cross a runway, assign taxiway routes. At the same time, I need to give instructions when to stop and start a movement as well as clear aircraft for landing and taking off. Despite being in ‘easy’ mode, keeping your eyes peeled on the screen for all planes moving while memorising commands was not a walk in the park. Faris explained how the lesson can allow their students to explore other potential careers beyond that of the pilot and also help them better understand the communications lingo with the Air Traffic Controller. 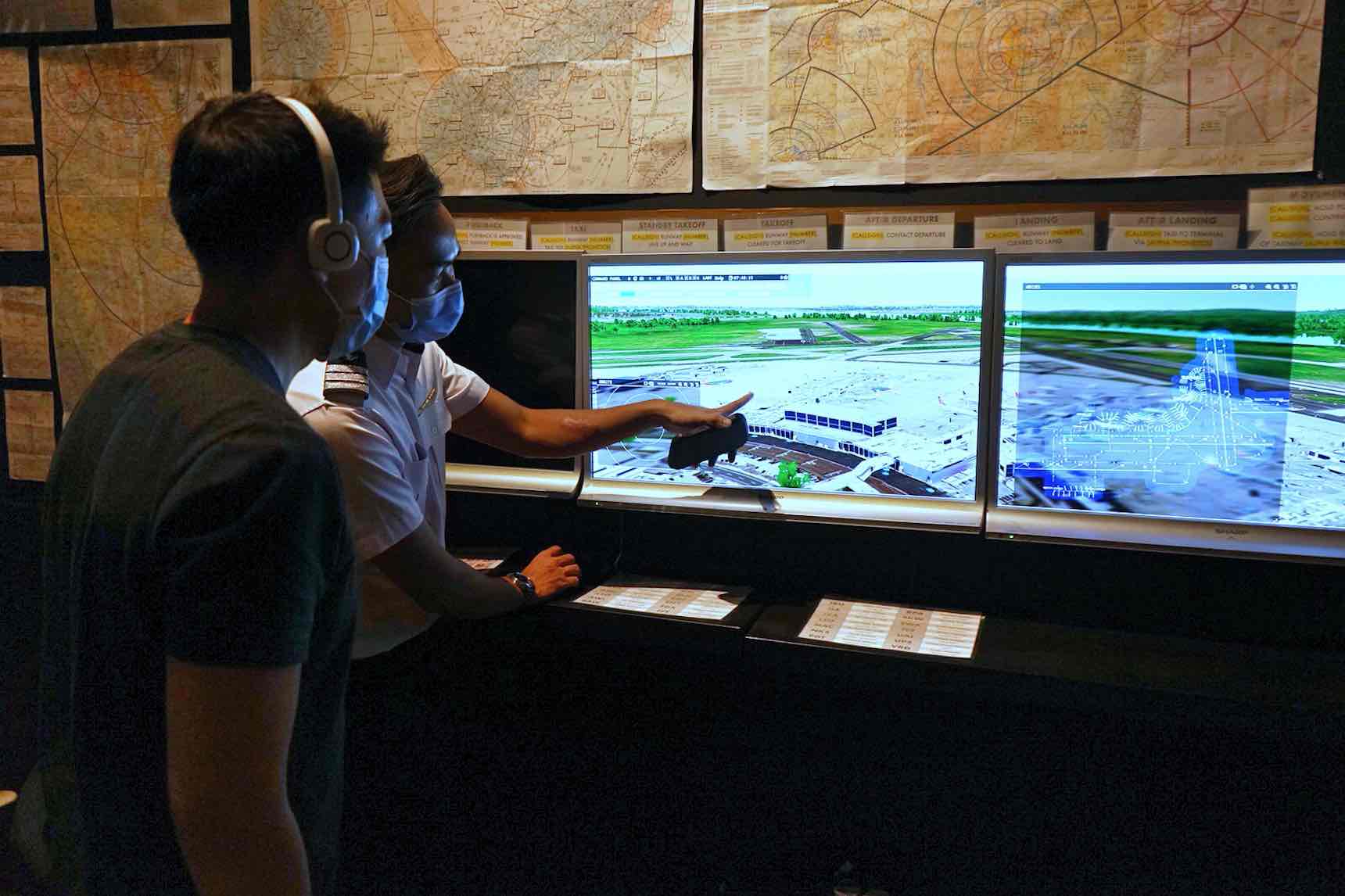 Barely passing my first station, we proceed on to the virtual reality prep-flight simulator to further understand complex topics which require additional visualisation. Through my lenses, I was able to instantly teleport to explore the grounds of more than 3,000 airports around the world which includes terminal buildings, hangars, jetways and more.

Faris was also able to show me the different types of aircraft and cockpits in the market. Through the virtual walkabout around an aircraft, he was able to explain the basic flight controls from the cockpit, point out the different parts of the aircraft and allowed me to witness the effects of these aircraft controls on the aircraft exteriors. The visualisation was realistic and made learning so much more fun! It is almost impossible not to be attentive because the instructor will be able to see exactly where your eyes are focused on real time. 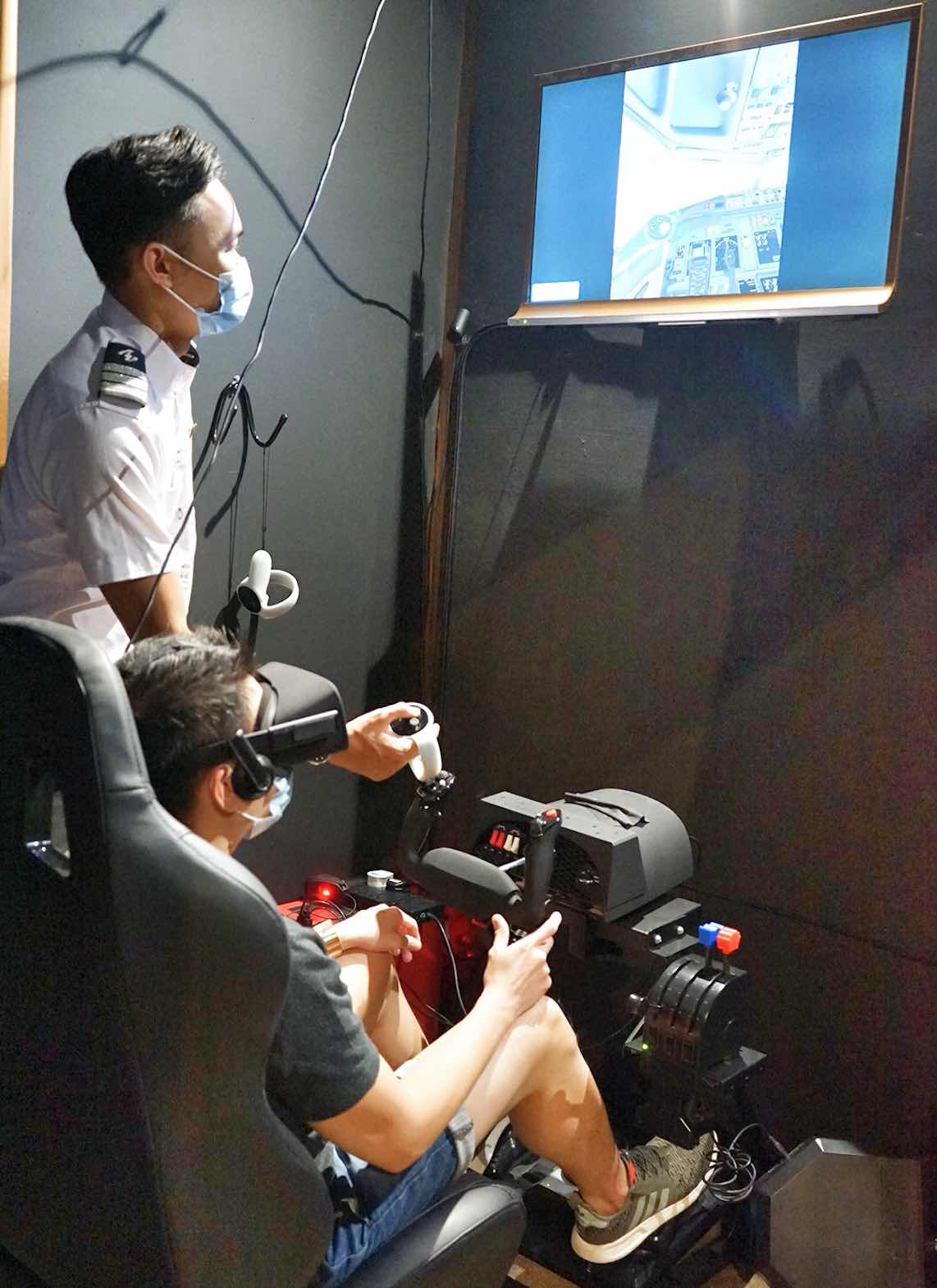 With that cleared, we are finally at the coolest part of flying a real-life simulator! Say hello to Cessna 172 Skyhawk Garmin 1000 Glass Cockpit – also known as the Digital Cockpit. Fully equipped with 180 degrees HD visual system for an immersive view directly from our cockpit, this simulator provides realistic and true-to-scale cockpit design hence making it an effective training environment for both students and certificated pilots. 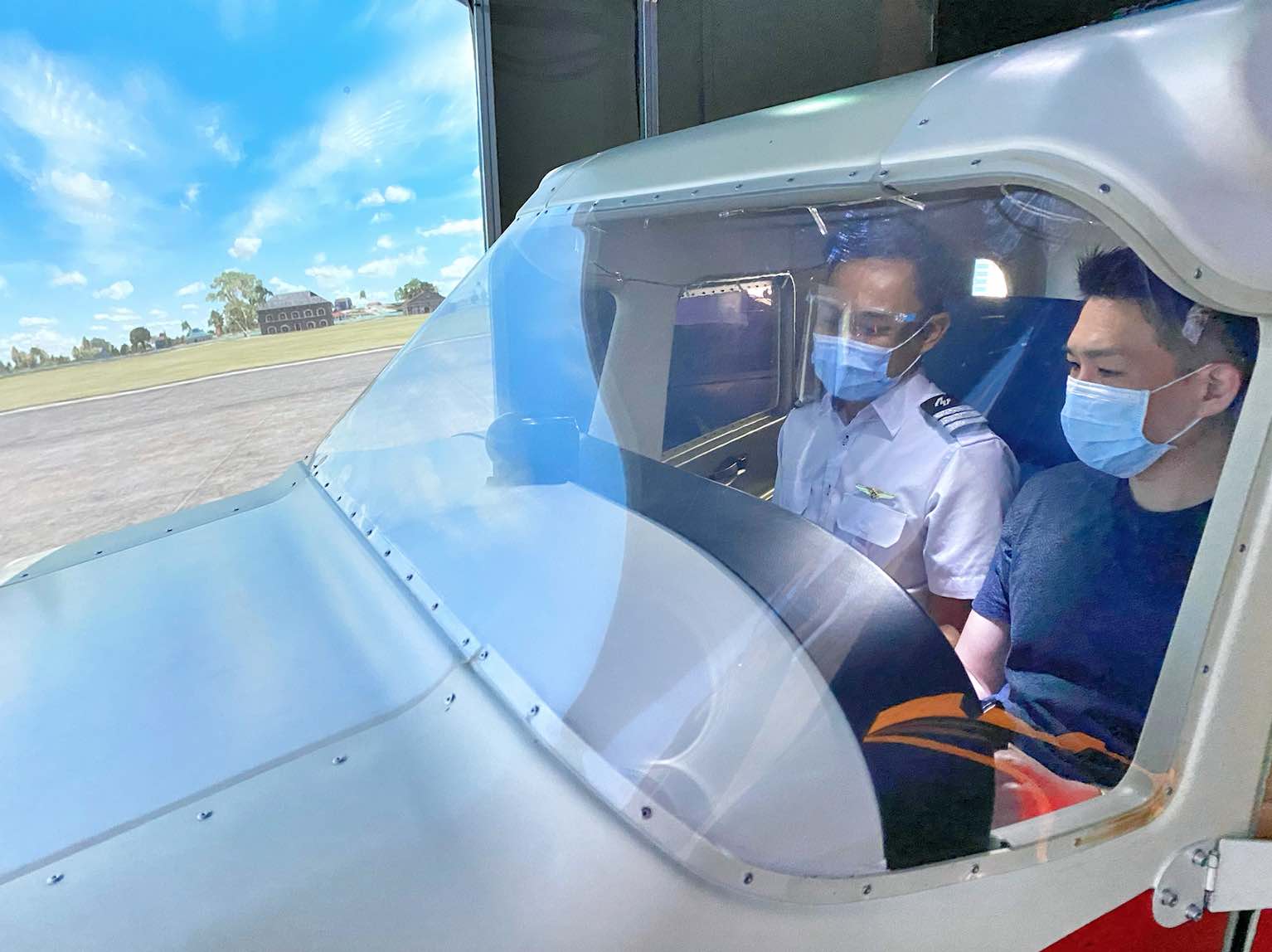 Under the patient guidance of Faris, I managed to successfully take off and navigate around the Singapore landscape. It was daunting at first but I soon got accustomed to the controls. Before long, I evolved into a F1 racer in the skies with sharp turns and daredevil dips (of course, such dangerous feats will not happen in real life). Other than the flight controls experience, this amazing simulator is also capable of creating scenario-based flight training events such as simulated equipment failure and emergency procedures, conducting pilot evaluations, showcasing instrument procedures and experiences hence facilitating increased pilot proficiency overall. 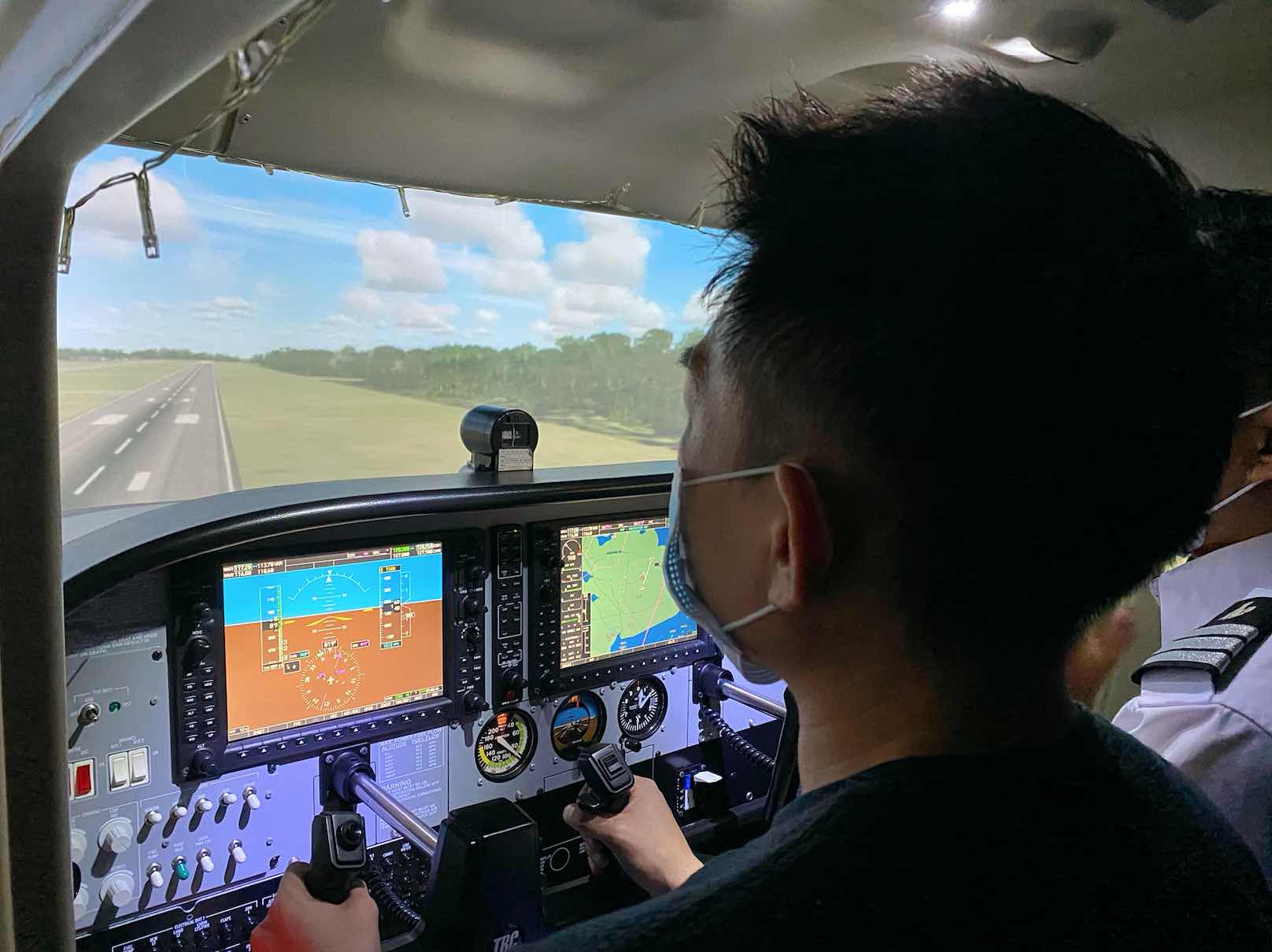 The Diamond 20 Katana Analogue Cockpit which has its shell from an actual physical Diamond 20 aircraft equipped with a control force load system on 3 axis definitely up the cool factor. This is Aeroviation’s latest flight simulator from Belgium which only arrived on 20 December 2019. The simulator provides a spectacular 240 degrees horizontal and 40 degrees vertical HD visual for an immersive and effective training environment for student and certified pilots. 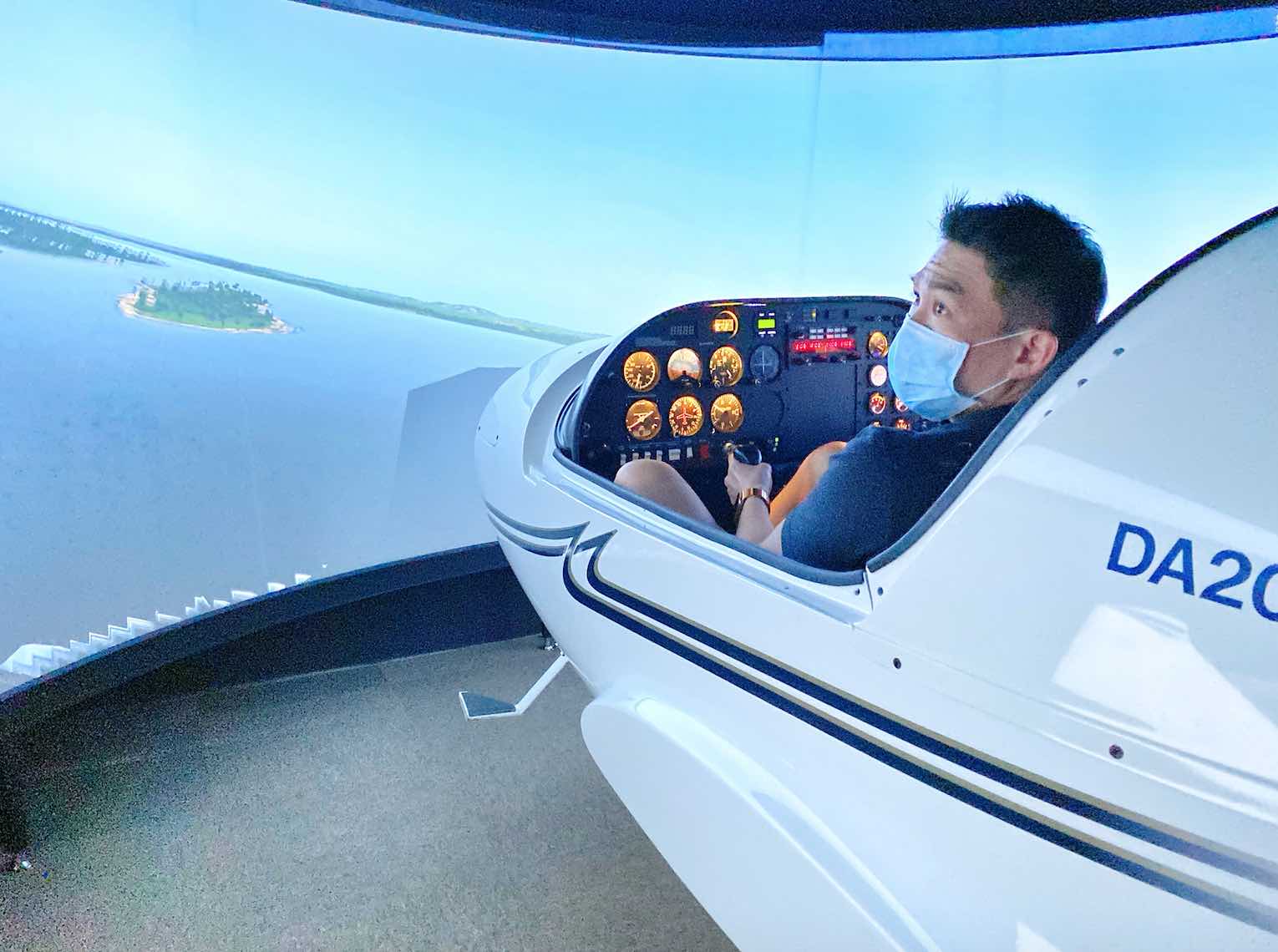 Unlike the previous simulator which required 2 hands to grip the controls, this plane is manoeuvred through a single stick control. This leaves one of your hands available to manage the other aspects of the flight. Having experienced the previous simulator, I must say I got pretty confident with my newly developed skills. That was when Faris introduced a simulated engine failure mid-flight which resulted in a decisive forced landing. With all these scenarios in place, these two simulators not only made a perfect training device but also one of the best procedure training aid for students. 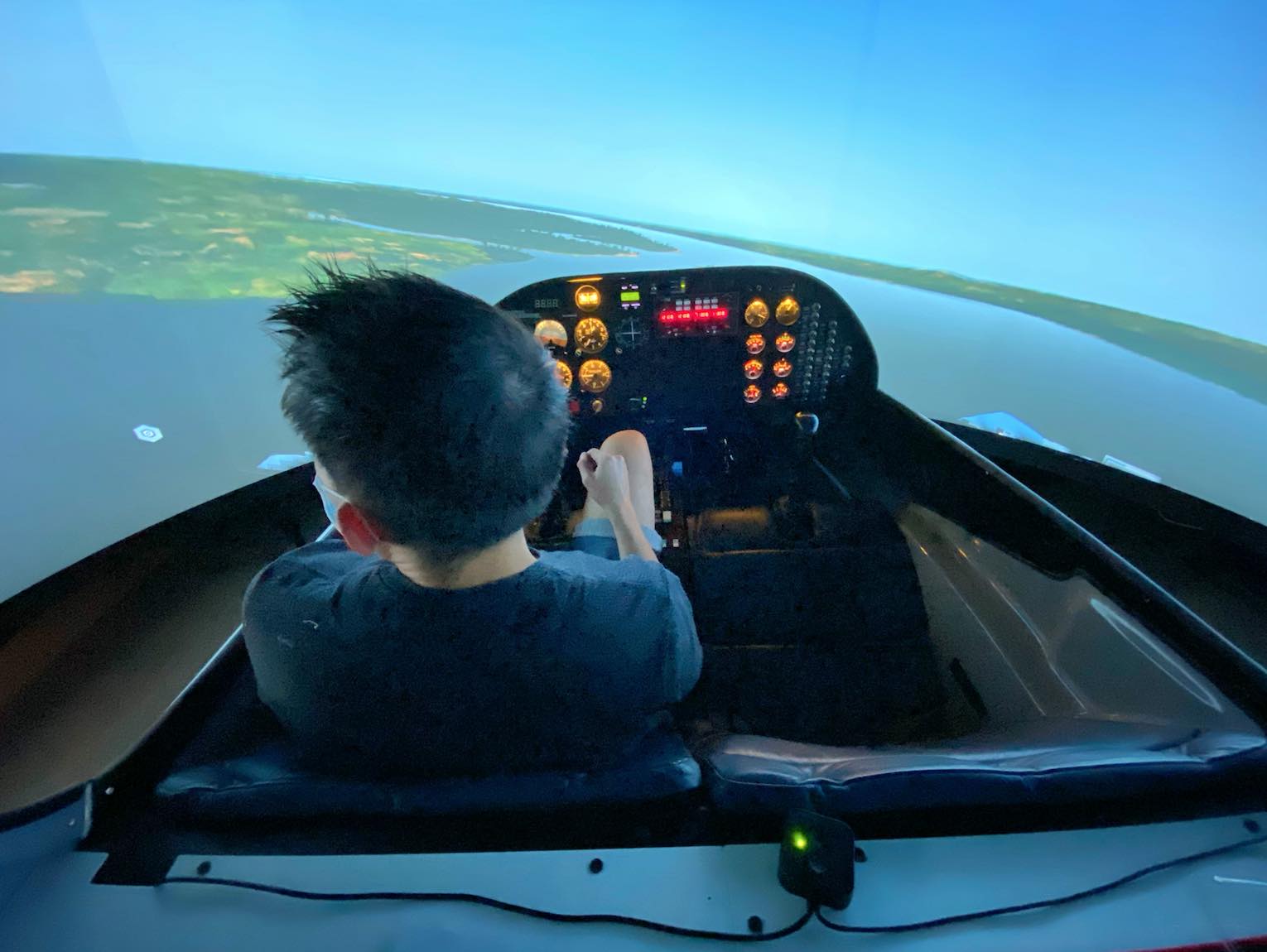 Getting your wings start early at Aeroviation. They have the Junior Aviator Programme suitable for children between 6 to 11 years old which is really affordable at just $240/month. Registration fees for the programme is $120 and the package includes a set of Student Pilot Uniform and a pair of epaulettes. 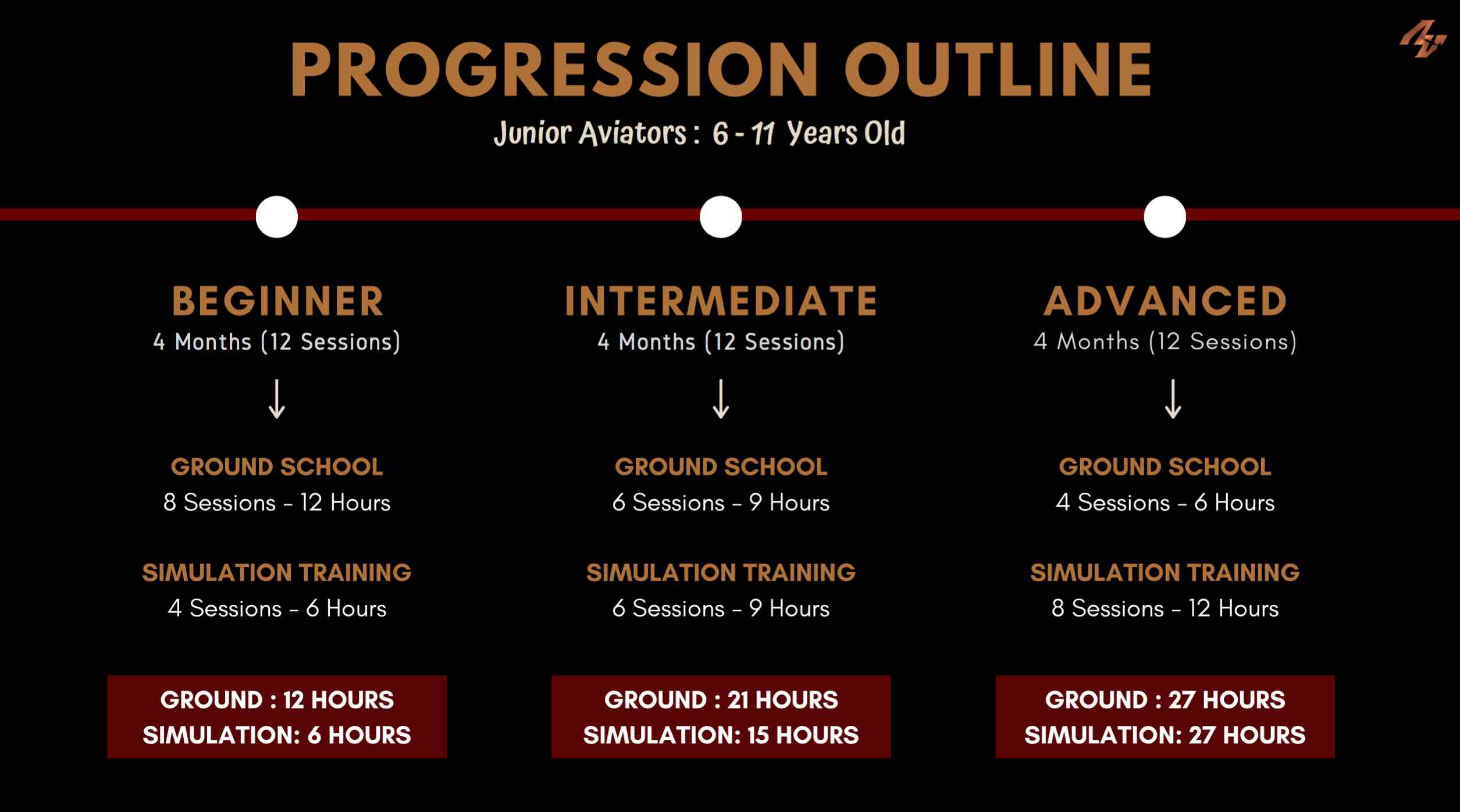 Aspiring teenagers between 12 to 17 years old can opt for the Young Aviator Package which is $280/month. Registration fees for the programme is $120 and the package includes a set of Student Pilot Uniform and a pair of epaulettes as well. 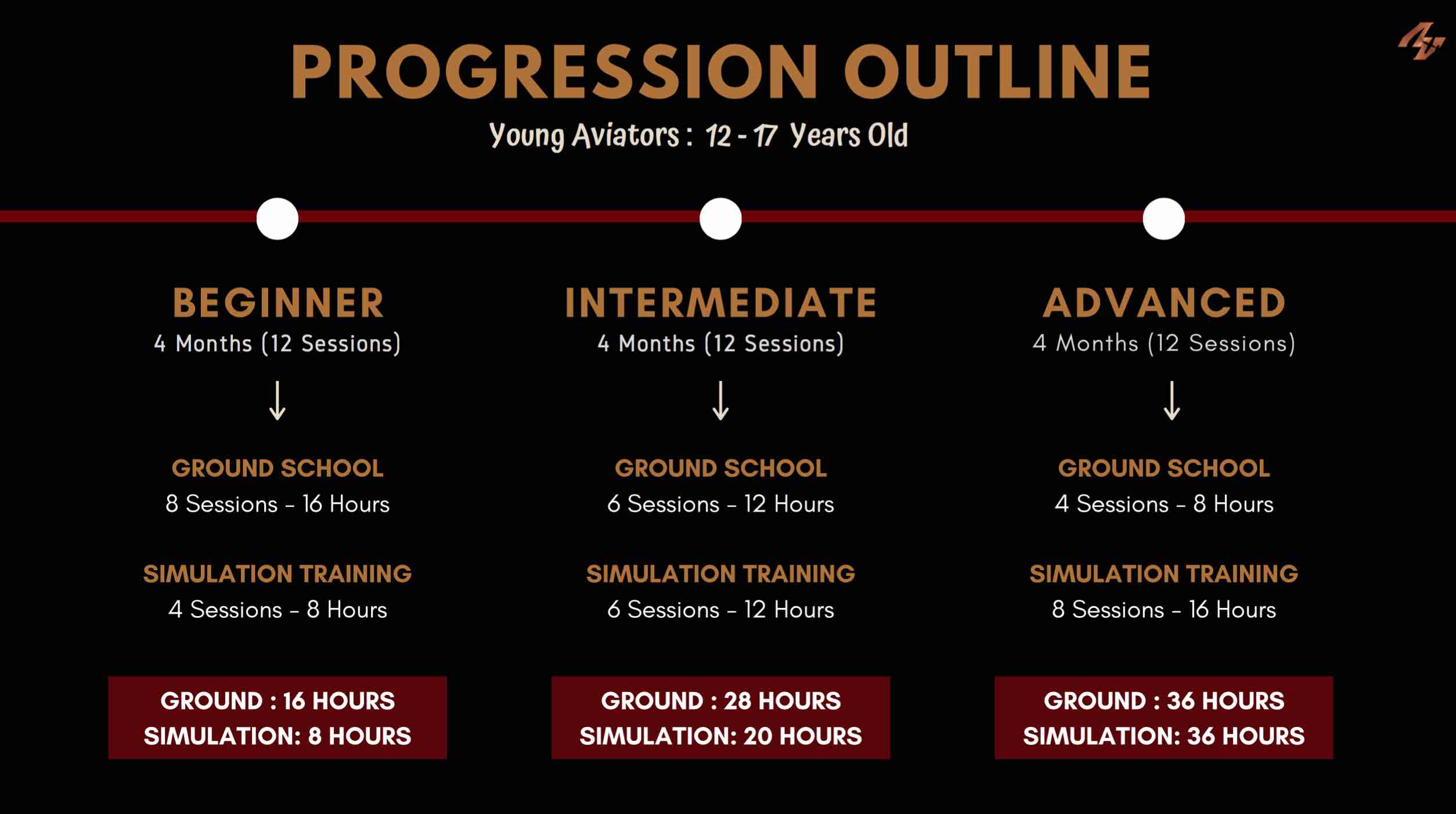 There is nothing more satisfying than seeing our young ones rising up the ranks. For each of these programmes, there will be a new intake every 2 months. 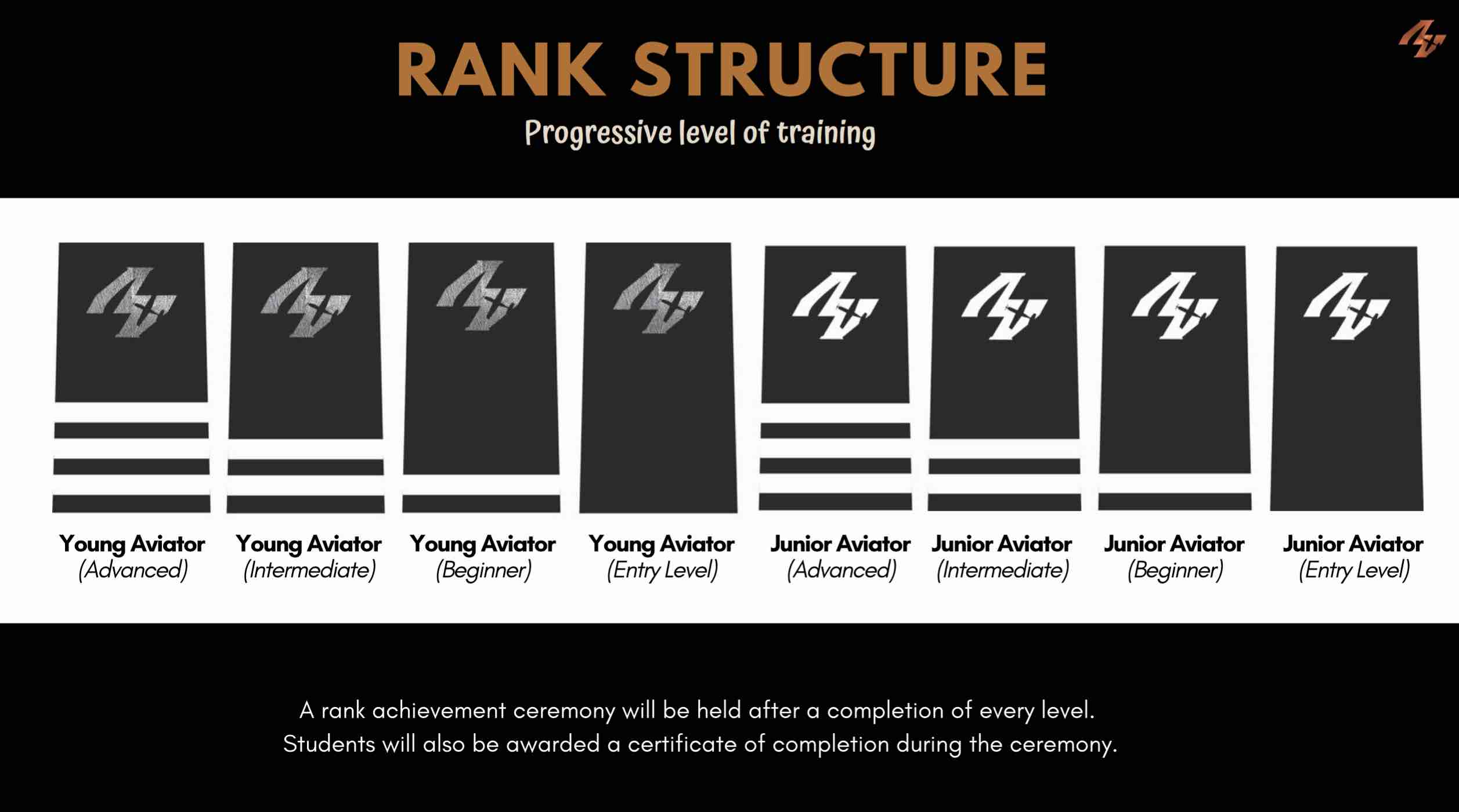 To find out more about their programme, go www.aeroviation.com or visit them at Oxley Bizhub  #01-50, 63 Ubi Road 1 Singapore 408728. Let your young ones’ aviation dreams take flight today! 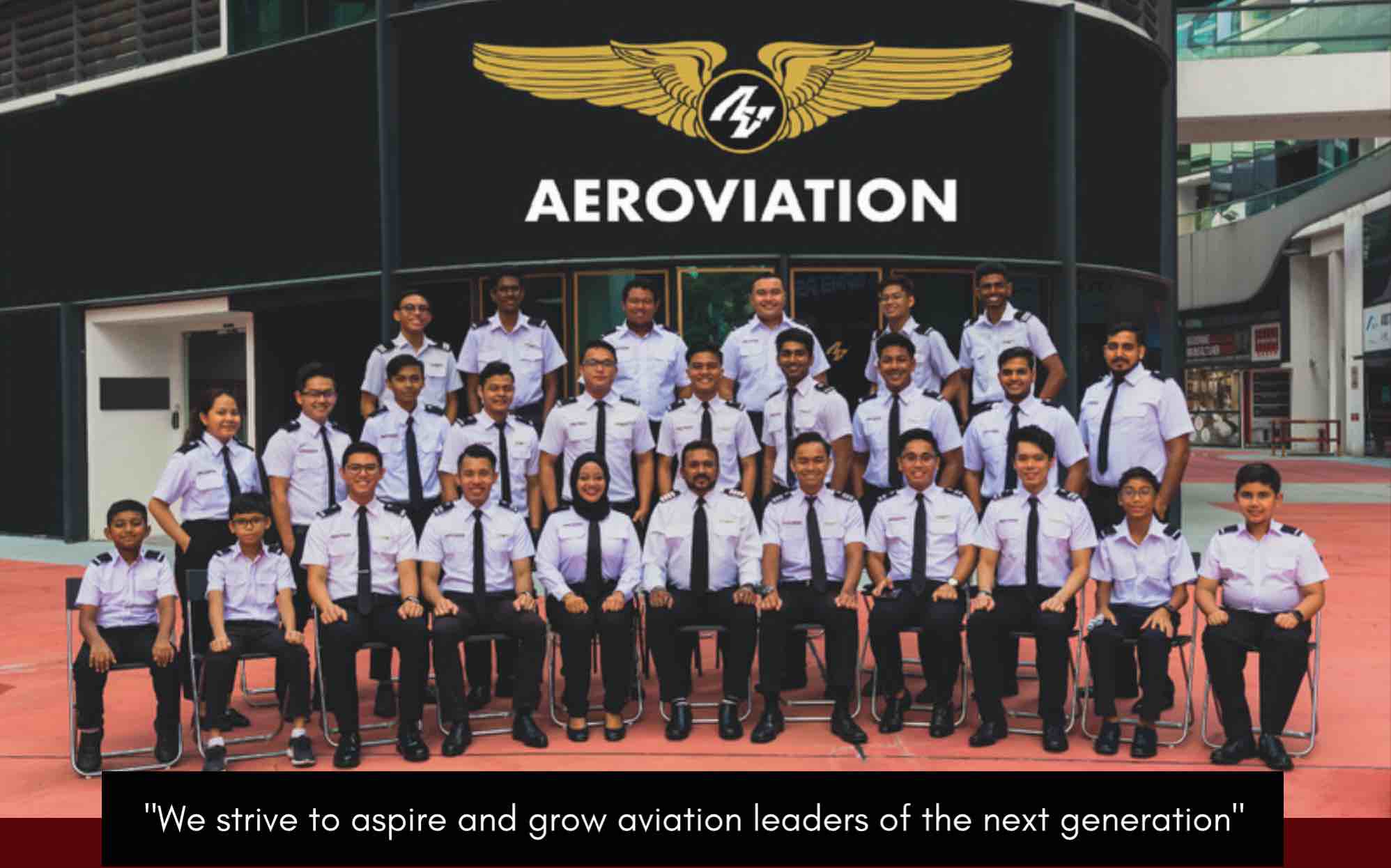