After a gradual period, Niantic has finally reached the end stage of its staggered release of Gen 3 Pokemon into the game. Trainers will be thrilled to know that this new Gen 3 Pokemon batch contains some of the most attractive Pokemon yet to be seen in the game, made up of mainly flying a and dragon types, along with a few others. While there will be a few Gen 3 stragglers left behind after this wave, you will be able to fill up the vast majority of your Pokedex starting today. We are here to share how to defeat and catch Pokemon Go Rayquaza as well as introduce the new Gen 3 Pokemon batch! 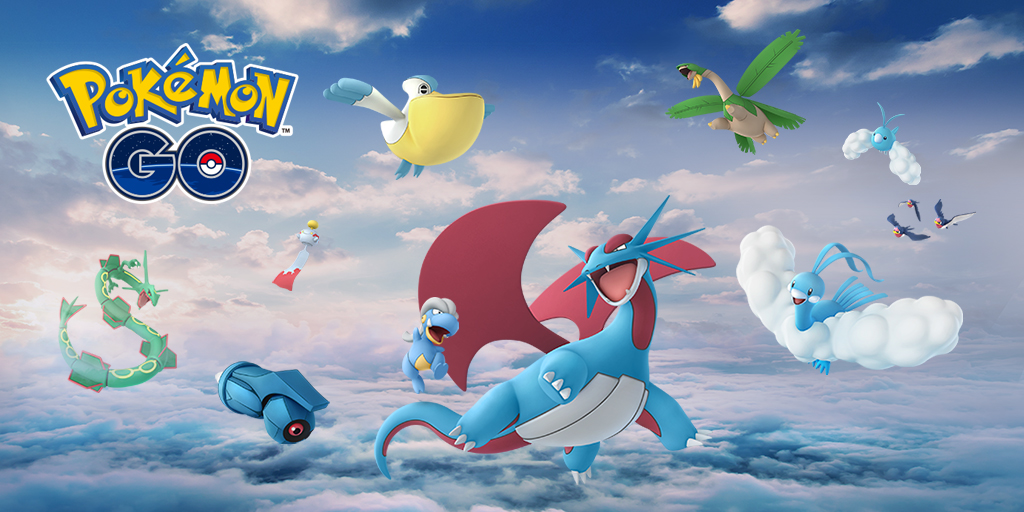 Here are the latest Gen 3 Pokemon that have been added to the game:

As well as your new raid bosses:

There are still a few stragglers from Gen 3 which includes special evolutions or mythical Pokémon that Niantic still keep within its secret stash. As we can see from previous Gen releases, Pokemon like Ditto and Delibird took a while to enter the game, and others like Mew and Celebi are still absent, the idea that hopefully, Niantic has unique plans for mythics sometime in the future.

From now until 13 February 2018, all wild Pokémon you encounter will be Gen 3 Pokemon. This will give you sufficient time to stock up and evolve without having to deal with the pesky older Pokemon.

With all of these Pokemon to catch and power up, it’s important to stock up on supplies. Beginning 9 February, new special boxes–which include Raid Passes, Incubators, and Star Pieces will be available in the in-game store until 23 February 2018.

To help you get your fill of the latest batch of Gen 3 Pokemon, Lure Modules will remain activated for six hours until 23 February 2018!

Rayquaza has entered the game as a legendary raid boss and will stay there until 16 March 2018. This will allow him to overlap a little bit with Kyogre, which is leaving on 14 February 2018.

The CP for the Rayquaza raid boss is 45,468 and as you might expect it’s not possible to solo the Gen 3 Legendary and we advise you take it on with at least 4 to 5 fellow trainers in order to take it down. Once captured, this dragon-type Pokemon can have a maximum capture CP of 2083, at Level 20, with a perfect IV score or 2604 in rainy weather when level 25 with a perfect IV.

Rayquaza has two different fast moves, both with STAB bonuses:

Pokemon Go Rayquaza – How To Defeat It

Rayquaza is a Dragon and Flying-type Pokemon. This means that it is weak against a wide variety of Pokemon, including ICE, FAIRY, DRAGON and ROCK types. It is worth noting that Rayquaza has a double weakness to ice, so maybe load up on the likes of Lapras and Articuno if you have them.

This legendary ice Pokemon is strong against all of Rayquaza’s moves, even Outrage. Blizzard and Ice Beam are his strongest charge moves, with Icy Wind putting him much lower on the list you so may want to consider using a TM on him if you have Icy Wind. Articuno is still strong but moves down the list a bit under Rayqauza’s Ancient Power Charge move.

As Rayqauza is weak against Dragon moves hence Dragonite is a strong counter. Dragonite starts off lower on our counter list at level 30 but makes a big jump as he increases in level up to number two at 36. He’s very strong against Ancient Power and Aerial Ace, but he’s not as good against Outrage. At very high levels, he can survive 2 Aerial ace and 1 Outrage, providing good DPS but Dragon Tail/Outrage will still be a bad matchup.

Legacy Ice Beam is the best special move for Lapras so if you have that you are good to go. If not, Blizzard is next best and still makes a respectable showing.

Jynx is a tricky one when it comes to where she measures up as a counter to Rayquaza. She command high DPS but low defence hence the opposite of Blissey. She moves all over the charts depending on her breakpoint, which is at 32.5 with 15 defence and 15 stamina or more depending on her IVs.

Because of the new weather effects introduced into the game, you need to pay close attention to your surroundings when taking on the new legendary. When tackling Rayquaza your best bet is when it’s windy, as it unlocks the Level 25 capture encounter. Your second best weather scenario is when it’s partly cloudy, using FAIRY type counters.

We hope you find the above information useful. All the best to catch this latest legendary!