#PinkDotSG, the movement supporting the Freedom to Love made a dramatic statement of solidarity on 28 June 2014. With an astounding 26,000 Singaporeans and Permanent Residents (PRs) which works out to more than ten times the number of the inaugural 2009 event, Singapore witnessed the turning of green space of Speakers’ Corner into a shimmering expanse of bright pink lights – crowned by a touching outline of a giant heart beating within the formation and I am extremely proud to be one of the pink torch holders. 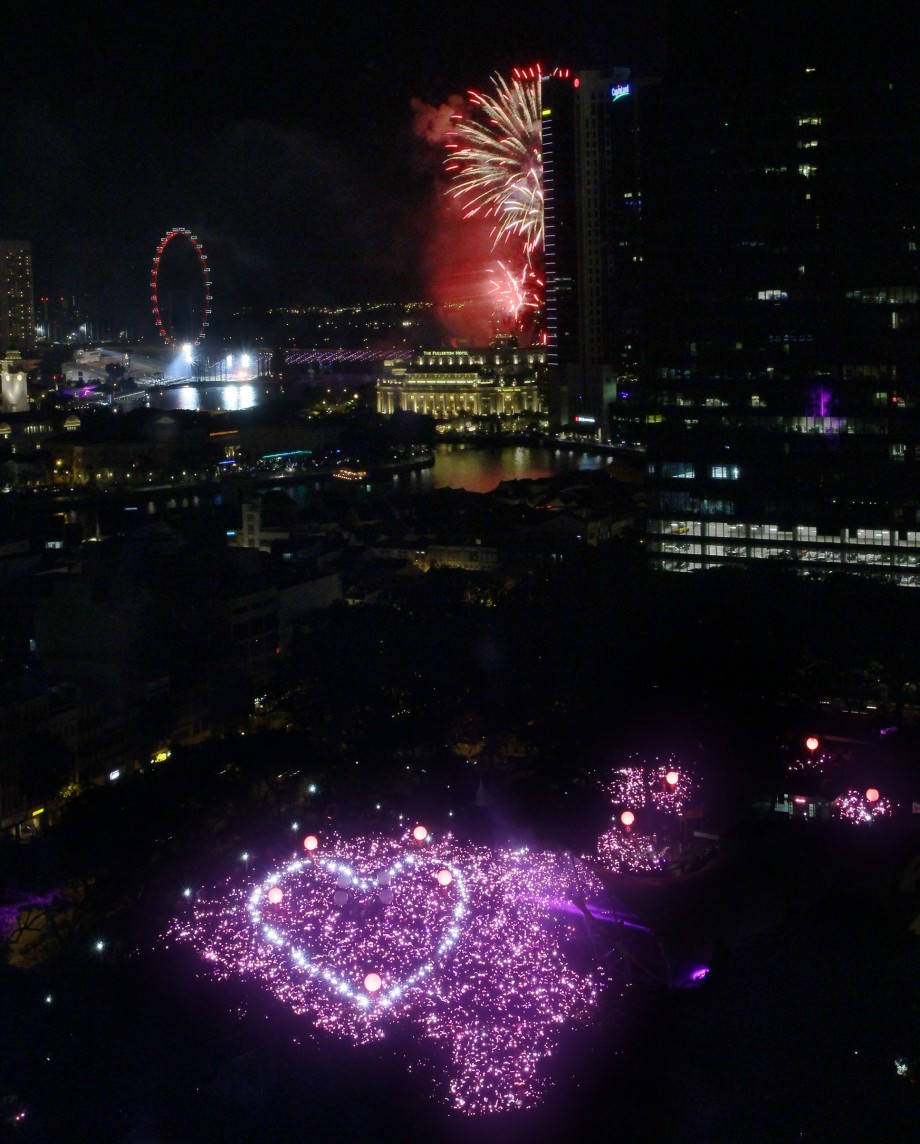 2014 marks a coming of age for the movement that has championed inclusivity and diversity amid an increasingly volatile social landscape. 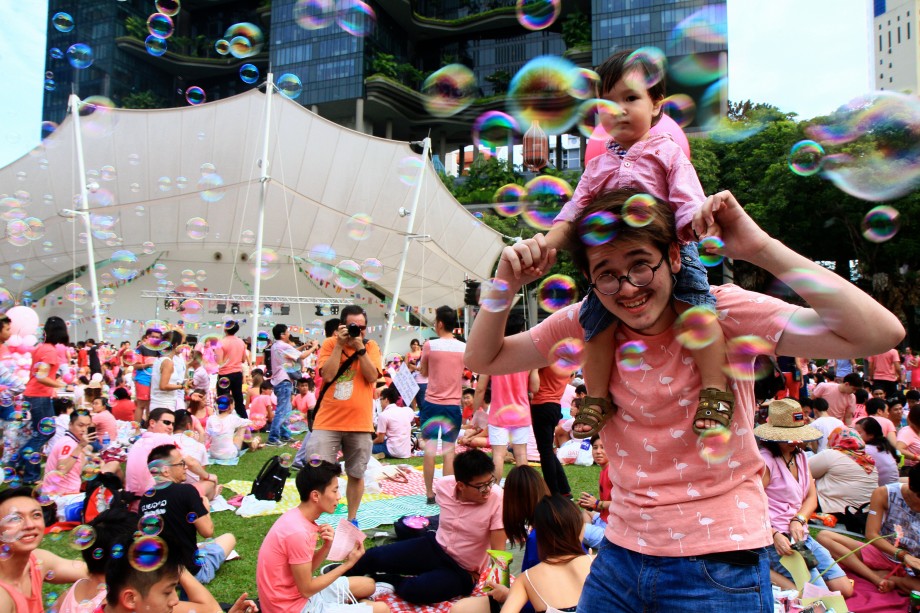 Said Paerin Choa, Spokesperson for Pink Dot Sg, “It is very heartening to see the dot growing year on year. We believe that this sends a strong message of love and acceptance, affirming that Singapore is a home for one and all, regardless of race, religion, sexual orientation or gender identity. We are, at the end of the day, one big national Family, and it is especially humbling this year, to see the sheer support we have received from Singaporeans from all walks of life.” 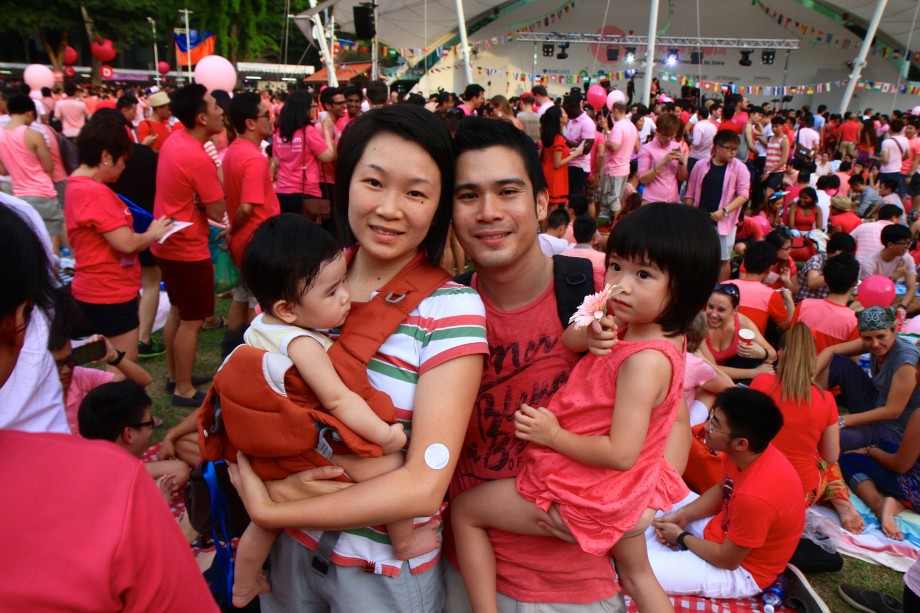 Led by this year’s ambassadors, theatre thespians Brendon Fernandez, Sebastian Tan and Janice Koh – also a sitting Nominated Member of Parliament (NMP) – Pink Dot 2014 went back to its roots by shining the light on the community and their perspectives on what the Freedom to Love means to them. 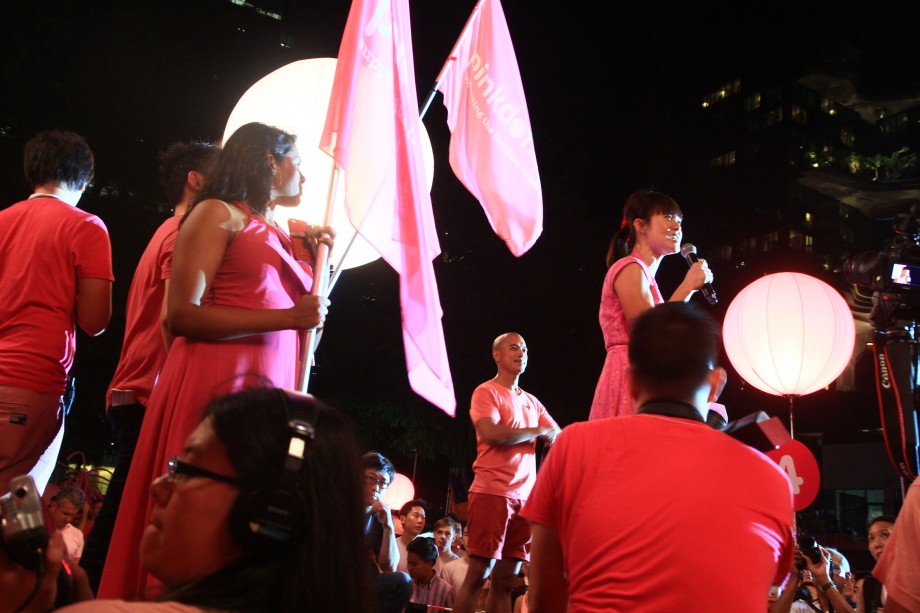 As my friends and I got ourselves settled in with our little mini picnic, the event kicked off with the inaugural Community Voices segment. Invited speakers from the LGBT community, and straight allies, shared stories on their personal challenges and touched on their hopes and dreams for a better and more compassionate Singapore. I was thrilled that my friend Scotts could join us in the event! 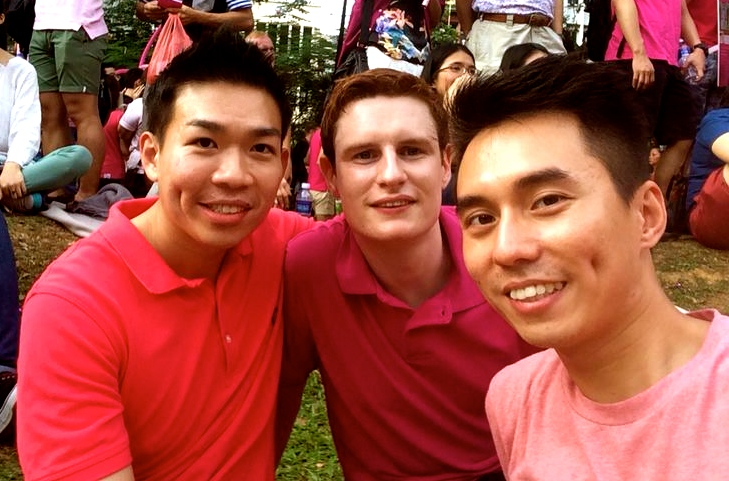 This was followed by the Pink Dot concert, which saw home-grown talents such as stage veterans Sebastian Tan as Broadway Beng, and Selena Tan; music producer and performer, Don Richmond joined solo artiste Roze Kasmani, award-winning industrial progressive-rock band The Voodoo Sound, capping of with Ugly in the Morning featuring Pam Oei. We also have Ivan Heng with his Samsui Women & Merry Men Gang creating quite a stir amongst the crowd. 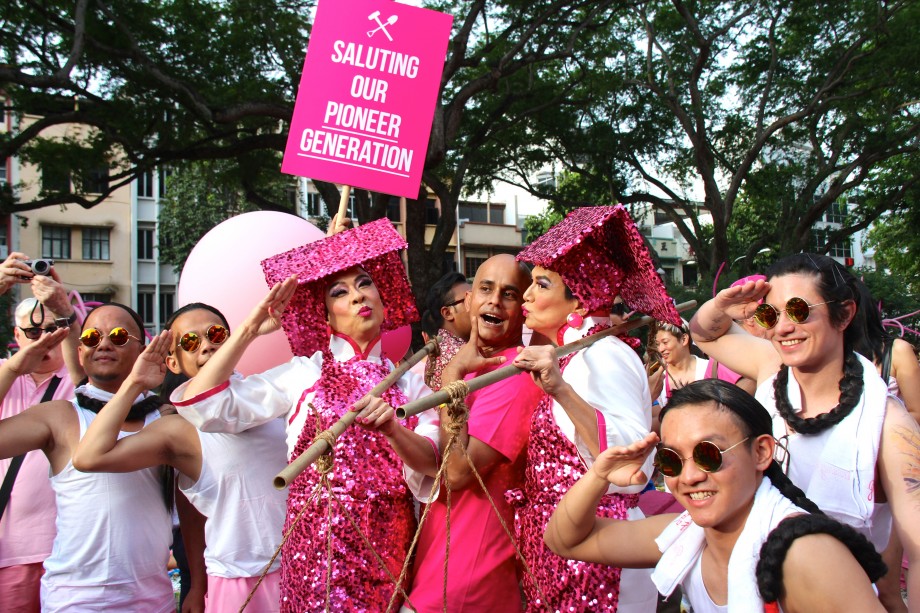 Internationally renowned DJ Aldrin set the tone with his signatures beats, with the Singapore Men’s Chorus taking stage as guest performers to sing the National Anthem, marking the commencement of the concert. Our National Flag flew across the skies right at this moment, it was perfect timing! 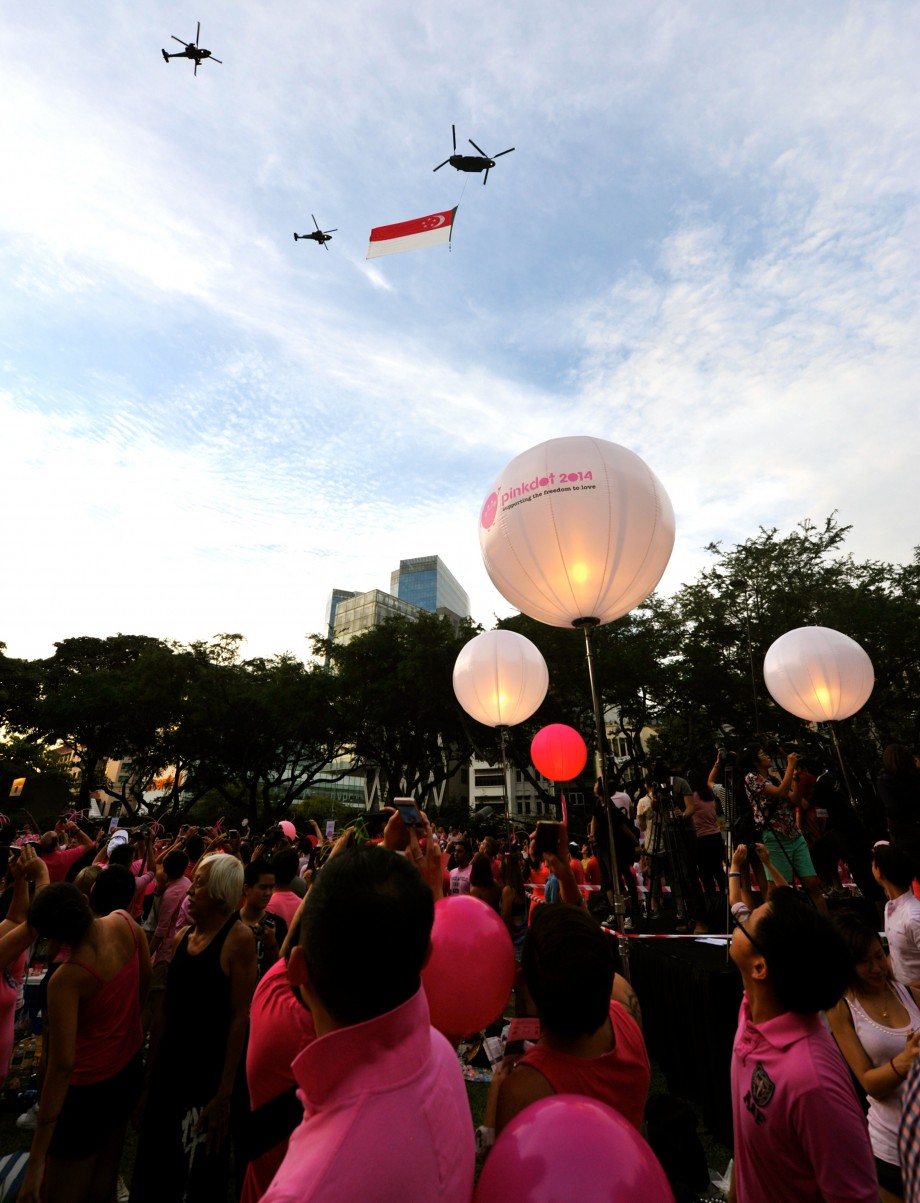 The community factor was further strengthened with the Community Tent, established as a focal point for Singapore’s diverse array of LGBT and LGBT-friendly organisations such as Oogachaga, Young Out Here, Pelangi Pride Centre, Purple Alliance, Maruah, Humanist Society and the Bear Project, among others. 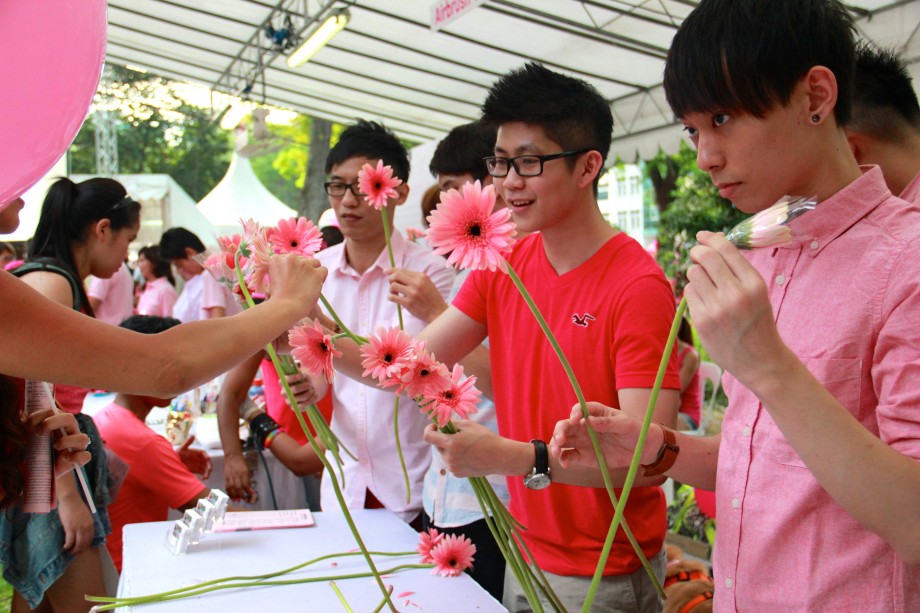 Pink Dot 2014’s corporate contributors also made a strong showing at the event, with contingents from giants Google, Barclays, J P Morgan, Goldman Sachs and BP adding colour to the pink-tinged landscape. Contact lens brand CooperVision made a shining statement with its sponsorship of all pink torches, while The Gunnery’s sound system ensured everyone was kept entertained throughout. Finally, PARKROYAL on Pickering provided the perfect backdrop for the event for photos opportunities and interviews. This is the strongest indication yet of Corporate Singapore’s growing support of an all-inclusive society. 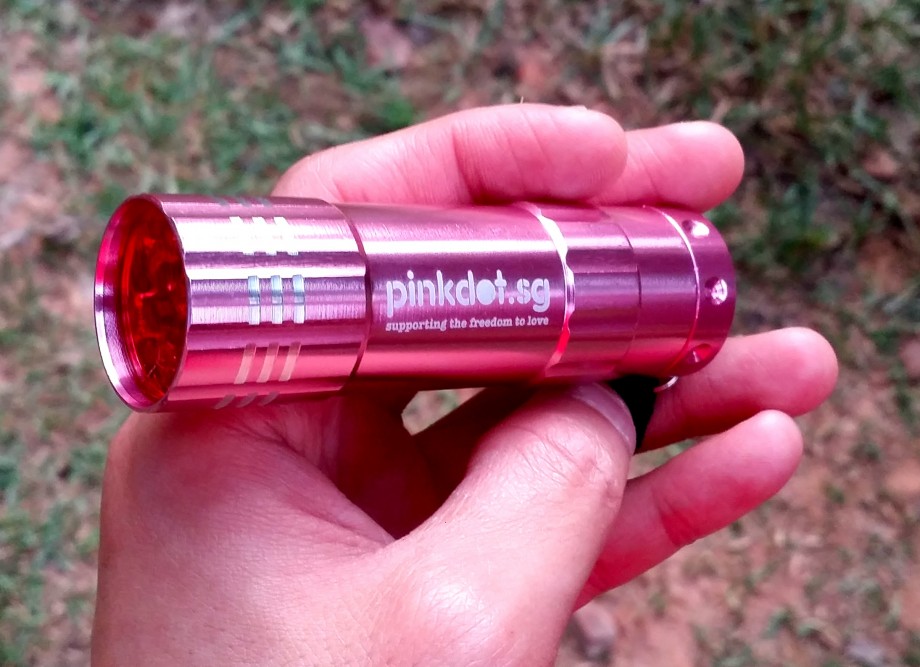 The event culminated at sunset when participants all came together to form a shimmering, giant Pink Dot with torches, mobile phones and light sticks. In a touching departure from tradition, the giant dot formation this year included an outline of a heart, situated quite literally in the ‘heart’ of the dot – creating a symbol of love and inclusivity. And the finishing touch: 26,000 voices belting out the song ‘We Are Family’ by Sister Sledge in unison and joy. 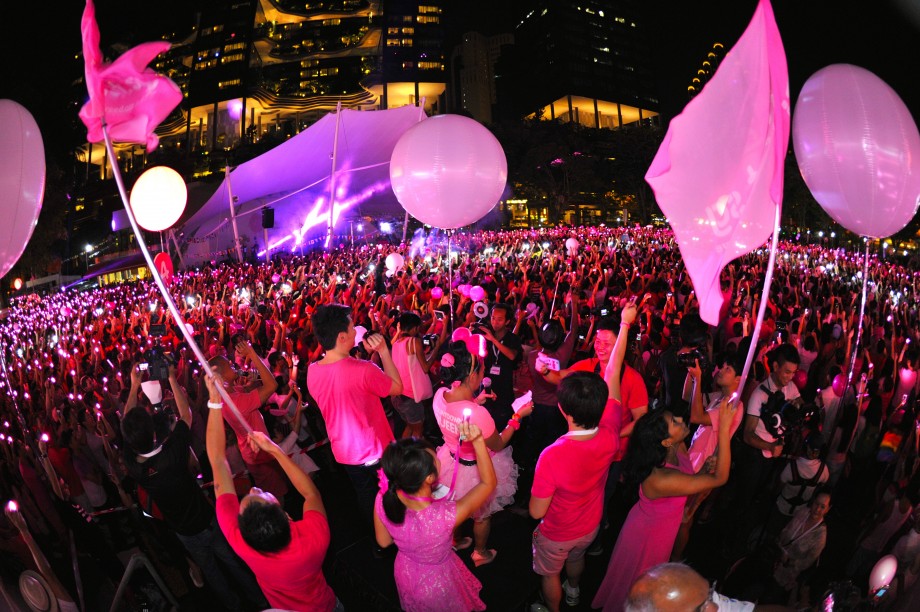 Added Paerin Choa, “Pink Dot remains committed to championing for an all-inclusive Singapore. Since its inception in 2009, Pink Dot has striven to be an event that celebrates diversity and the Freedom to Love in a peaceful, positive manner, staying within the law and respecting the sensitivities of all Singaporeans.

“Even as we remain mindful of opposition from certain quarters, we are confident that this Little Red Dot we call home is large enough for us all to co-exist peacefully, respectfully and with dignity.”

Support the Freedom to Love!

It is never too late to support the Pink Dot Freedom To Love Movement.

Connect with the cause through their websites and social media channels:

Supporting #PinkDotSG 2014 was a wonderful experience for me & my friends. We felt really proud waving our pink torchlight to form the largest Pink Dot ever in Singapore and more importantly to be a freedom fighter for Friends, Family & Love in Singapore.

We look forward to see more participants for #PinkDotSG 2015!