That was the simple premise of the event that I recently covered. It was an event organized by Mount Elizabeth to promote the use of personal insurance for hospital visitations by the public. It would culminate in an event involving hundreds of runners from all over the island running from 2pm to 2pm ,on treadmills, with an added bonus being that for every 30km they clocked, the hospital would be giving out free cataract surgery for the needy elderly.

So being contacted to film and document this entire process, I wondered within myself as well, if i would be able to film for 24 hours. With my battery charger and favourite loupe packed, I headed off to begin on this seemingly momentous task.

Now, in my head before every event, I would already have a basic idea of the angles and way the shoots should be shot. This would have to be inline with the client’s brief but also at the same time, as every event photographer/ videographer knows, one has to be prepared for the unexpected. Lighting conditions may not be optimal ( LED lighting or a Filter, check!) Space to maneuver may also be limited ( ultrawide lens ,check!) and also there would be alot of noise pollution from the event’s music and emcee ( “quieter” spot just off the main event area would have to be found to film interviews, check! ) are all things I would have to consider and take care of during the event.

Another thing nobody really tells you about shooting events in Singapore in particular, is that most of them are held under tentages. Though a welcome relief from the blistering sun, the heat generated from hundreds of people packed into one spot has a “sweat house” effect (Extra Dri Fit T-shirt, check!! ).

Everybody knows the feeling of running on a treadmill. The unnatural feeling of travelling without moving. The sound of the rubber track rolling under you as your push forward. And for the event there were some 80 best treadmills assembled for the event. To me, it was perfect! The subject would be more less in the same spot but moving still. I could just set up my tripod directly in front of the runners with a tight shot of their faceS to capture the “pain” and sweat fly. 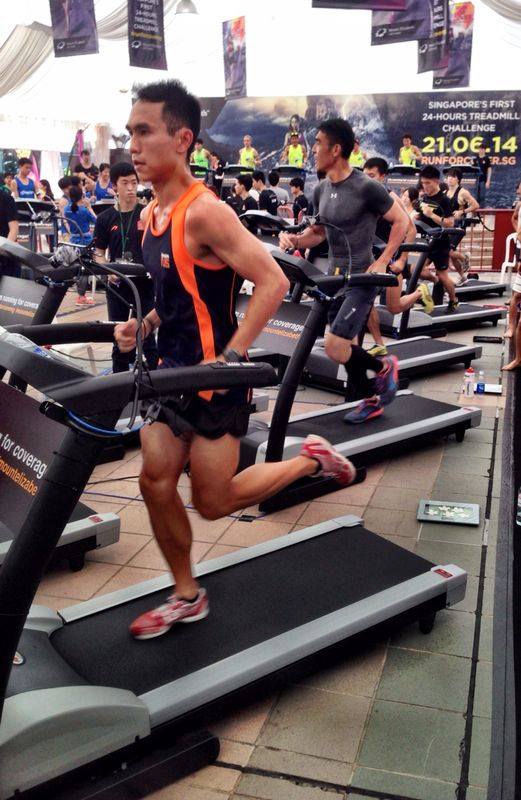 By 10pm, most of the runners had covered some 90-110km+ already . I was on my 2nd DRI-FIT T-shirt, and my pants had some questionable looking sweat stains (SWEAT). The camera was doing well so far, running on it’s 3rd battery change. My body on the other hand was aching all over from having run around with the camera mounted on a monopod the entire day, but I knew that the longer the event carried on, the more tired the runners would become, resulting in perhaps some dramatic footage that I could capture to give the video more emotional depth.

Now, imagine if you will, a pair of sweaty socks, in an enclosed box with a few durian shells thrown in for good measure. Multiply that resulting smell by 10 times and you will more or less get the smell of 80 runners that have been running in turns through out the night. It was 9am the next day, and that to me was the smell of literal blood sweat and tears.

Many of them looked tired but never the less determined to complete the run, which would be ending in a few hours.There were a few wobbly / swaying bodies resting, while those running on the treadmills were encouraged along by their teammates that fanned and sprayed water onto them as they pushed through what must have been their own personal limits. The organizers knew this and they roused the crowd with loud and fast music. The emcee was dancing on stage with cheerleaders cheering along. And it worked. The atmosphere to the very last second was absolutely electric and everybody completed the run without major incident or injury.

So at the end of it all, what did this event mean to me? Well, my best answer to this is through through the video, in it, you will see that I featured rather predominately a skinny runner mid way through. He looked bone thin and weathered.

To me, he was the face of pure determination. He wasn’t young or buff like the rest of the runners, but there he was, still running, after some 20 hours. Running for a good cause. Running for cover. 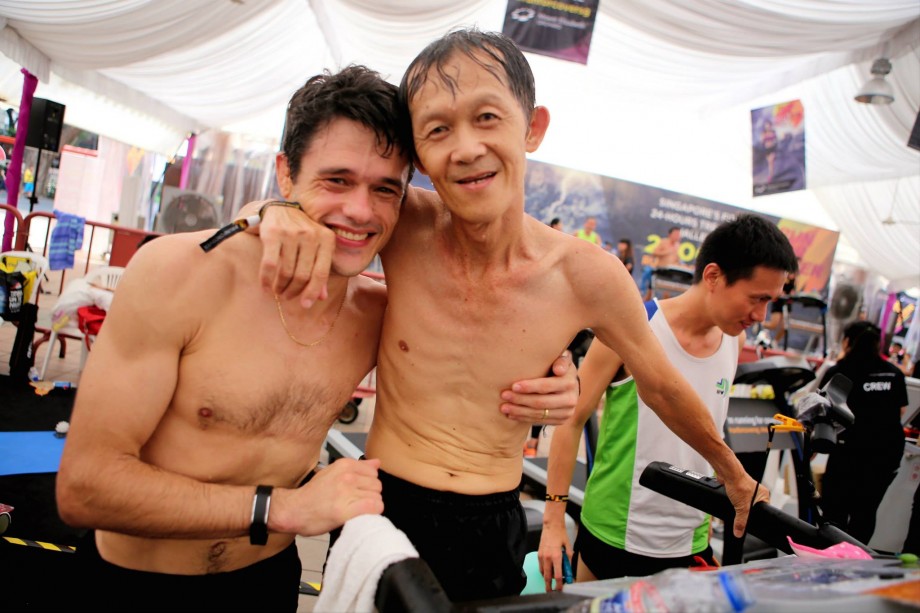 Photos are courtesy of Wilson Pang & video is courtesy of 201 Productions (they can be reached via email at 201pdtn@gmail.com)”