From 12 June to 12 December 2021, Sun Yat Sen Memorial Hall (SYSNMH) will be presenting its latest special exhibition, Modern Women of the Republic: Fashion and Change in China and Singapore, which uses fashion as a barometer of societal change to shed light on the changes in women’s status, roles and lifestyles since the late 19th century. The exhibition will display close to 100 artefacts and photographs, focusing on Chinese women’s clothing and accessories from China and Singapore that span almost a hundred years. 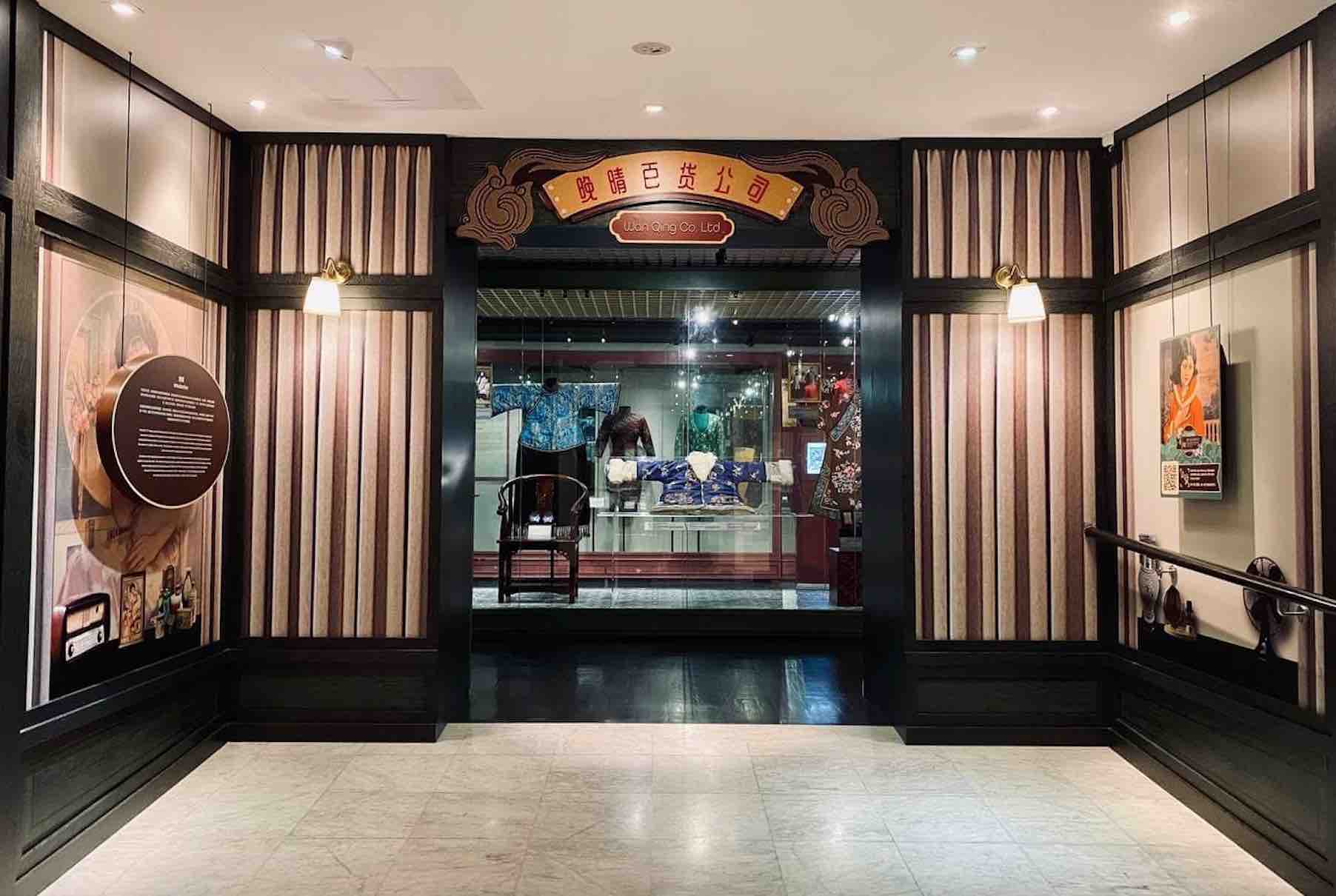 Fashion was a means of self-expression for women from as far back as the late Qing period, through post-independence Singapore, and even today. Whether it was loose-fitting robes, form-fitting cheongsams or “civilised new outfits”, the stylistic evolution of women’s clothing reflects social and political changes that took place over the century and also shapes what we now know as the “modern woman” and her roles in society.

By examining the changes in women’s fashion during this period, SYSNMH hopes to trace the rise of the “modern woman” in China and Singapore. It also hopes to examine the various factors that shape our understanding of what constitutes a “modern woman”. It does this over three separate sections – from charting political changes in society from the 1890s to the 1930s, to covering the evolving notion of a modern woman from the 1930s to the 1960s, and finally to exploring how fashion empowered working women in Singapore from the 1950s to the 1970s. 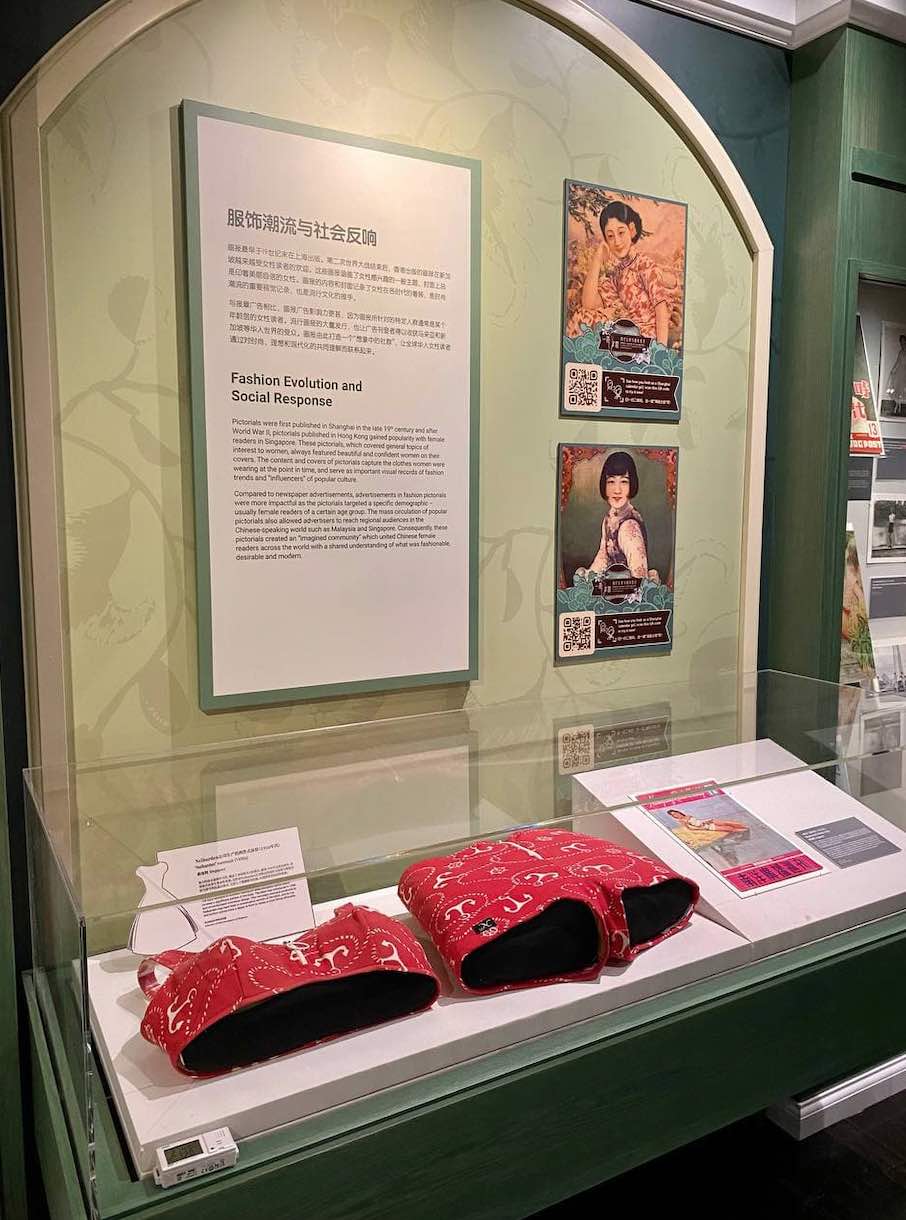 Ms Tan Yan Ni, assistant curator at SYSNMH, said: “Fashion, besides being a form of self-expression, is often a reflection of the times. This is why we chose fashion as a medium to tap into broader conversations, to discuss women’s multi-faceted and ever-changing roles across history, and how their contributions are integral to the political, social and economic development of a society. It is also timely for us to explore this topic as 2021 is the Year of Celebrating SG Women, and we hope to spark off more discussions amongst Singaporeans about what constitutes a modern woman today.”

The early years after the founding of the new Chinese Republic were fraught with political turmoil and uncertainty, accompanied by anxieties about what constituted “ideal womanhood”. The government of the time made big strides towards abolishing practices such as the binding of feet and breasts, whilst female education developed and ignited the concept of the “modern woman” and her role. This section traces changing fashion trends at that time which sheds light on the social and political changes that took place during the creation of a modern society. 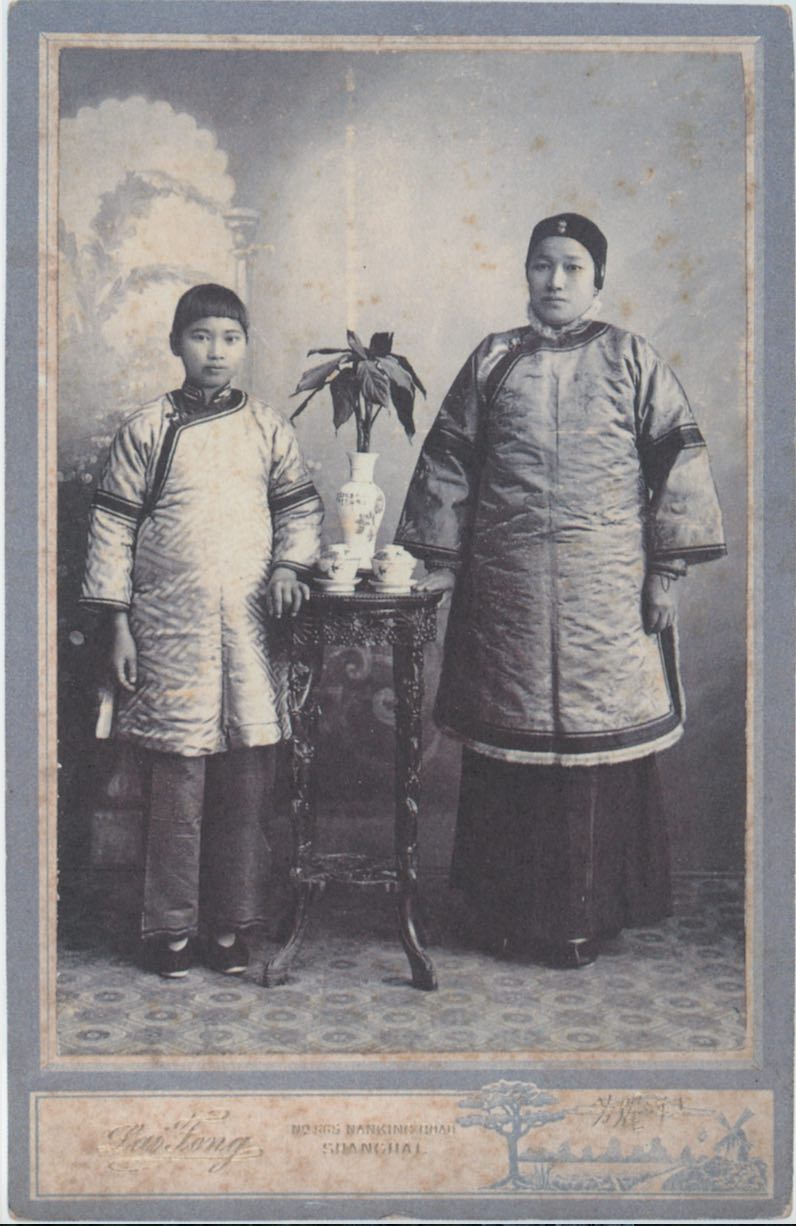 This set of wedding clothes was worn by Mdm Tan Lay Choo, the sixth daughter of prominent community leader Tan Kah Kee. The top with large trumpet sleeves had elements of the then fashionable “civilised new outfit”, while the skirt had Western-style buttons. The butterfly and flower motifs embroidered on smooth satin embodied wishes for the couple to enjoy a harmonious and fruitful marriage. This bridal ensemble was tailored by tailors in China and sent to Malacca for the wedding. 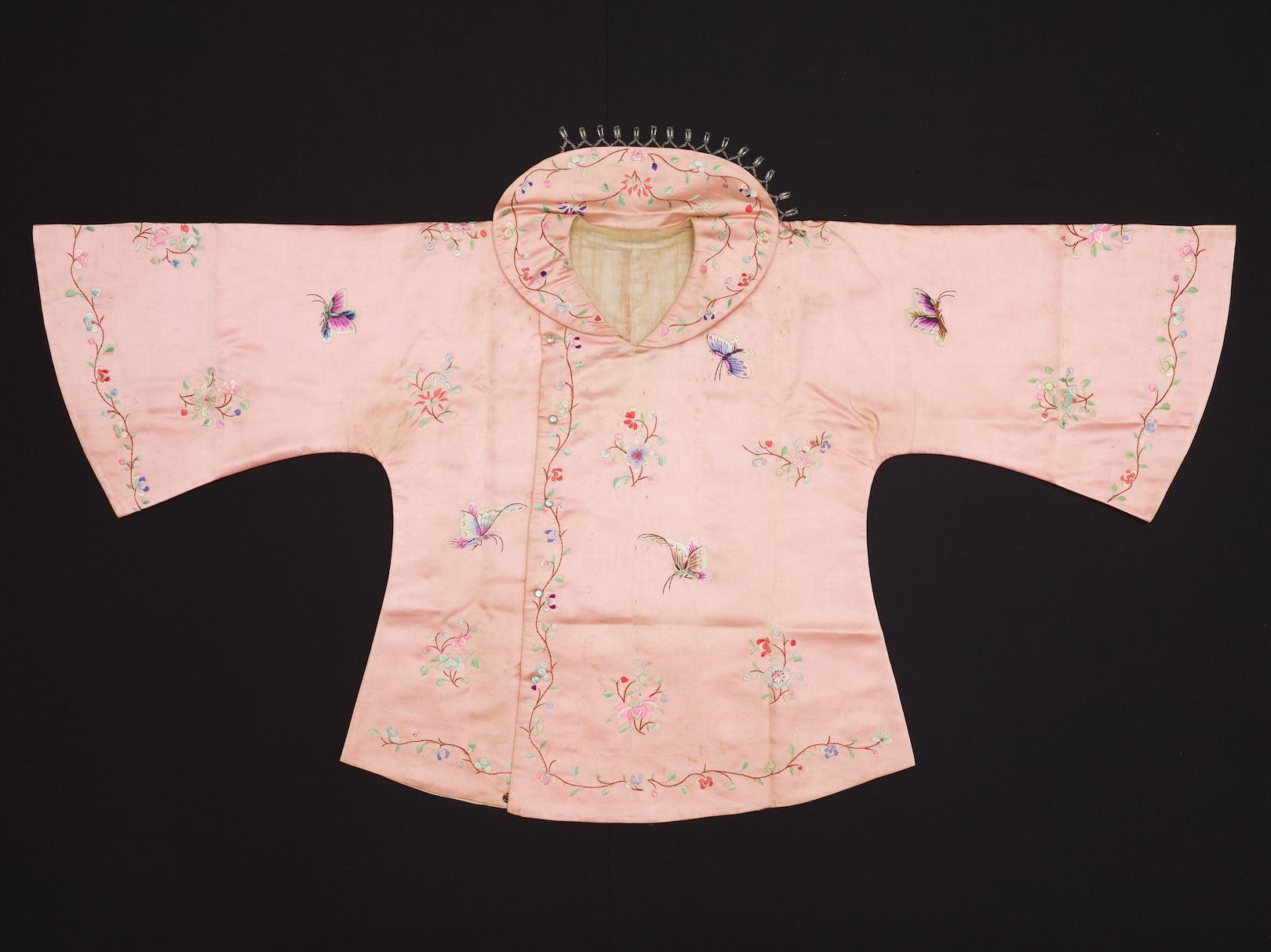 In the wake of the May Fourth Movement in 1919, the issue of whether women should cut their hair attracted widespread attention and discussion in newspapers in China. During that period, short hair was seen as a form of physical and psychological liberation for women. In addition, women with progressive ideas preferred collarless garments as they felt that the collar restricted the movement of the neck and should be abandoned by “modern women”. 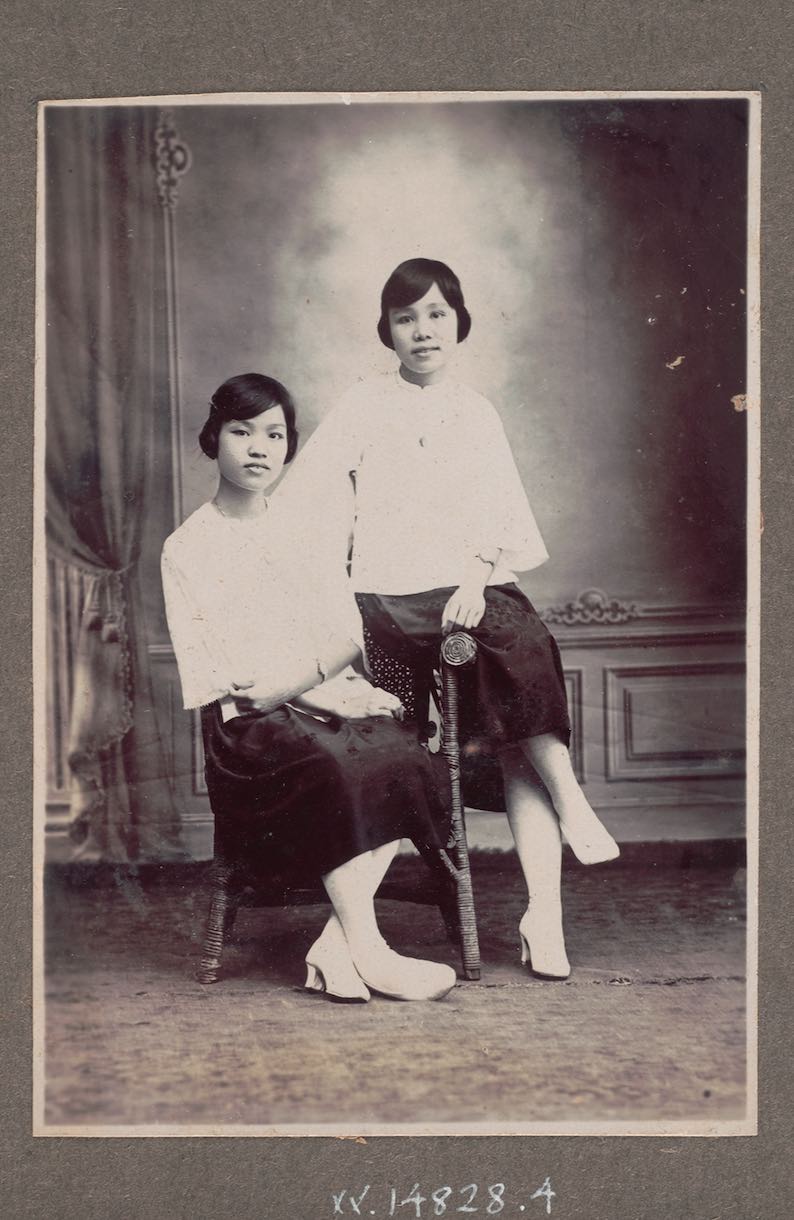 This cheongsam features handmade buttons made out of silk fabric and a diagonal ren-front which extends to the under-arm on either side and resembles the Chinese character “ren” (人, “human being”). The front opening of the cheongsam is called jin (襟), and there are many variations such as straight slant front, pipa front etc.

The period from the 1920s to the 1940s was regarded as the golden age of the cheongsam. As China became increasingly influenced by Western fashion trends, more and more Chinese tailors began to incorporate waist and bust darts onto the cheongsam to accentuate the wearer’s figure.

The proliferation of print media from the 1930s onwards encouraged the growth of fashion consciousness and experimentation amongst women then. Fashion magazines, advertisements and pictorials continuously sparked consumer desires, tested society’s acceptance of new ideas, and embedded the idea of “modernity” into all aspects of daily life. 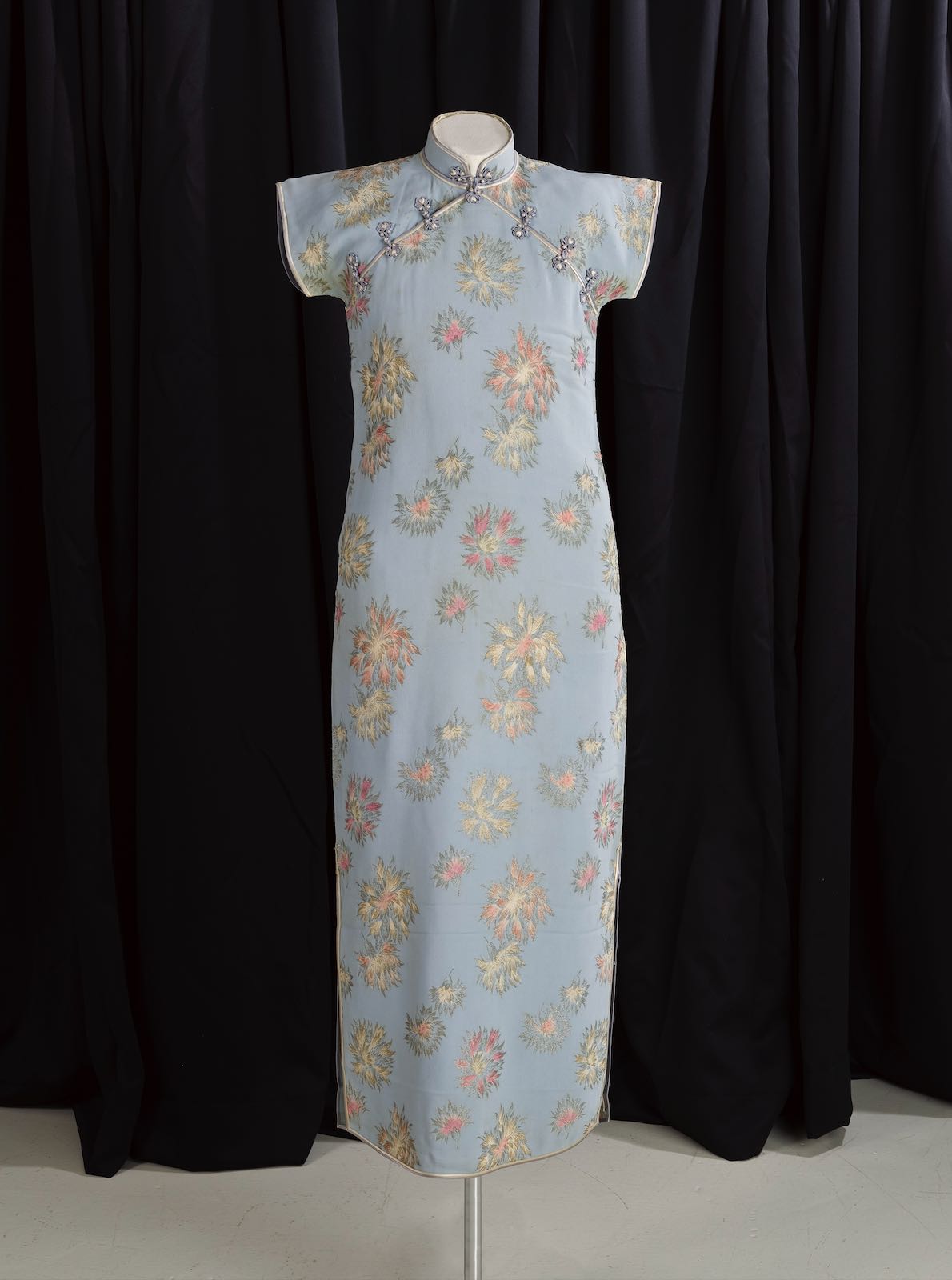 Advertisement for Gold Spot brand of cigarettes in Lat Pao  (1930)

This cigarette advertisement portrays a man and woman socialising in public while enjoying a smoke. The woman is wearing a blouse with puffed sleeves and a short pleated skirt. The legs of the woman are fully exposed from knee down, which would have been considered scandalous just a decade before. The advertisement also illustrates society’s new attitudes towards love and courtship. 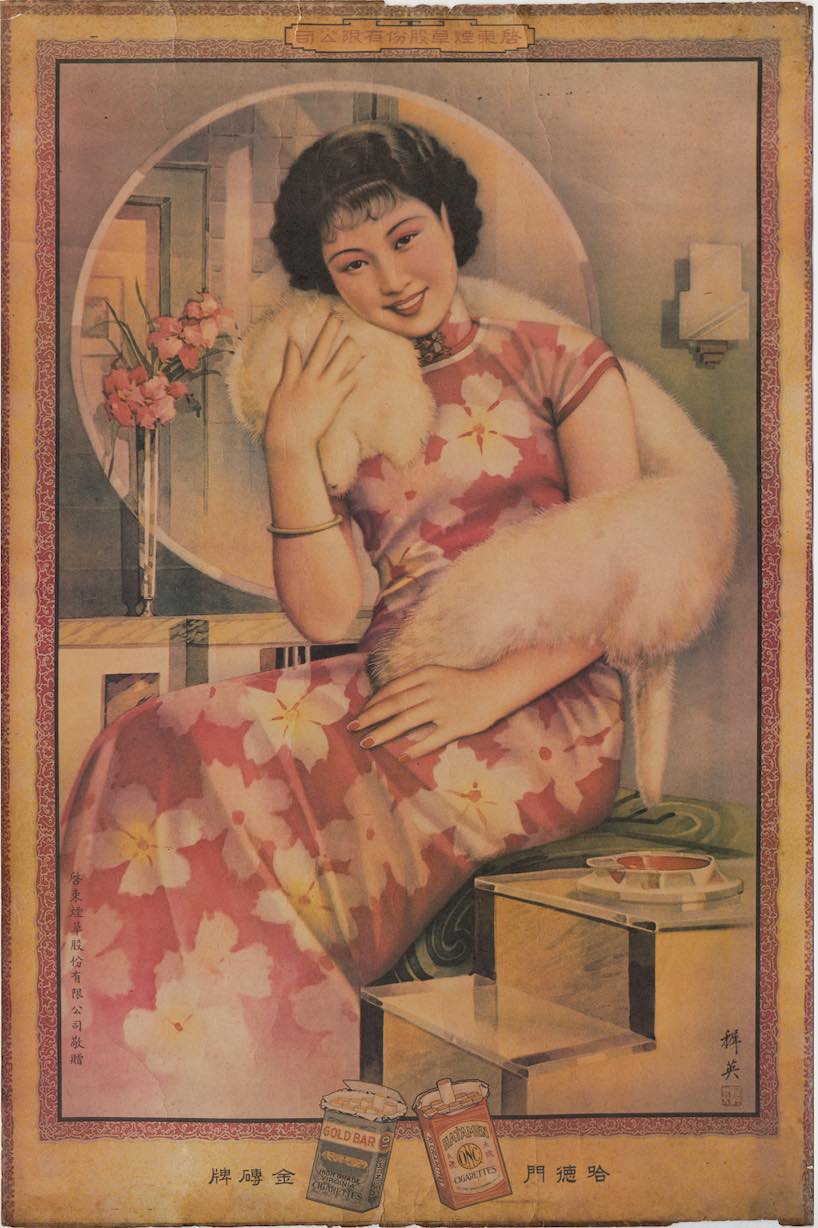 Nanyang Radio Weekly was a popular weekly magazine published by Nanyang Siang Pau Press in Singapore. The magazine was given exclusive permission by the former Broadcasting Corporation of Malaya to cover their radio programmes and broadcast timings across various parts of Malaya and Singapore. Its covers often featured popular stars and radio personalities.

This issue on display features Huang Xia, a popular 1950s getai star in Singapore, in a one-piece strapless swimsuit. The Chinese previously considered swimsuits as scandalous because they were skin-tight and revealing. From the mid-20th century, swimsuits became more acceptable in Singapore as they were featured more regularly in the print media and beauty pageants. 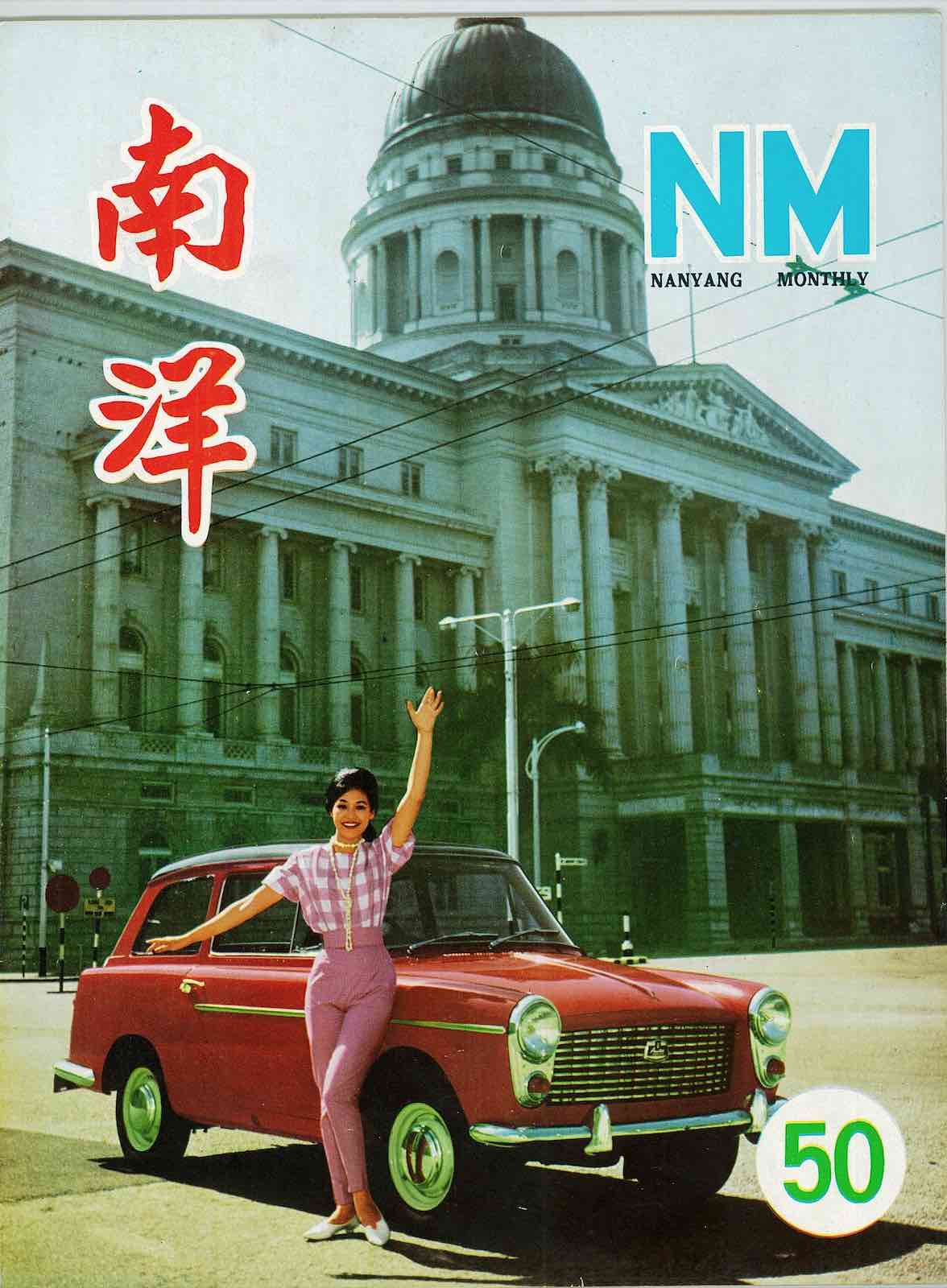 The third and final section of the exhibition examines the growing economic empowerment amongst women, with more joining the workforce and gaining financial independence from the 1950s. As they took on their new and more public roles, women became more conscious of how they groomed and presented themselves in public, and this led to a boom in the beauty and fashion industries in Singapore.

The design of this one-piece dress can be traced back to the “New Look” design popularised by Christian Dior in 1947. Its cinched waist flatters a woman’s figure and accentuates her femininity.

The rise of Singapore as a hub for textiles in the region in the 1960s also meant that local women could buy imported fabrics and Western-style clothing at affordable prices. As Singapore became increasingly exposed to Western culture and fashion trends through films and television, such one-piece dresses with an A-line skirt became highly popular among young working women. 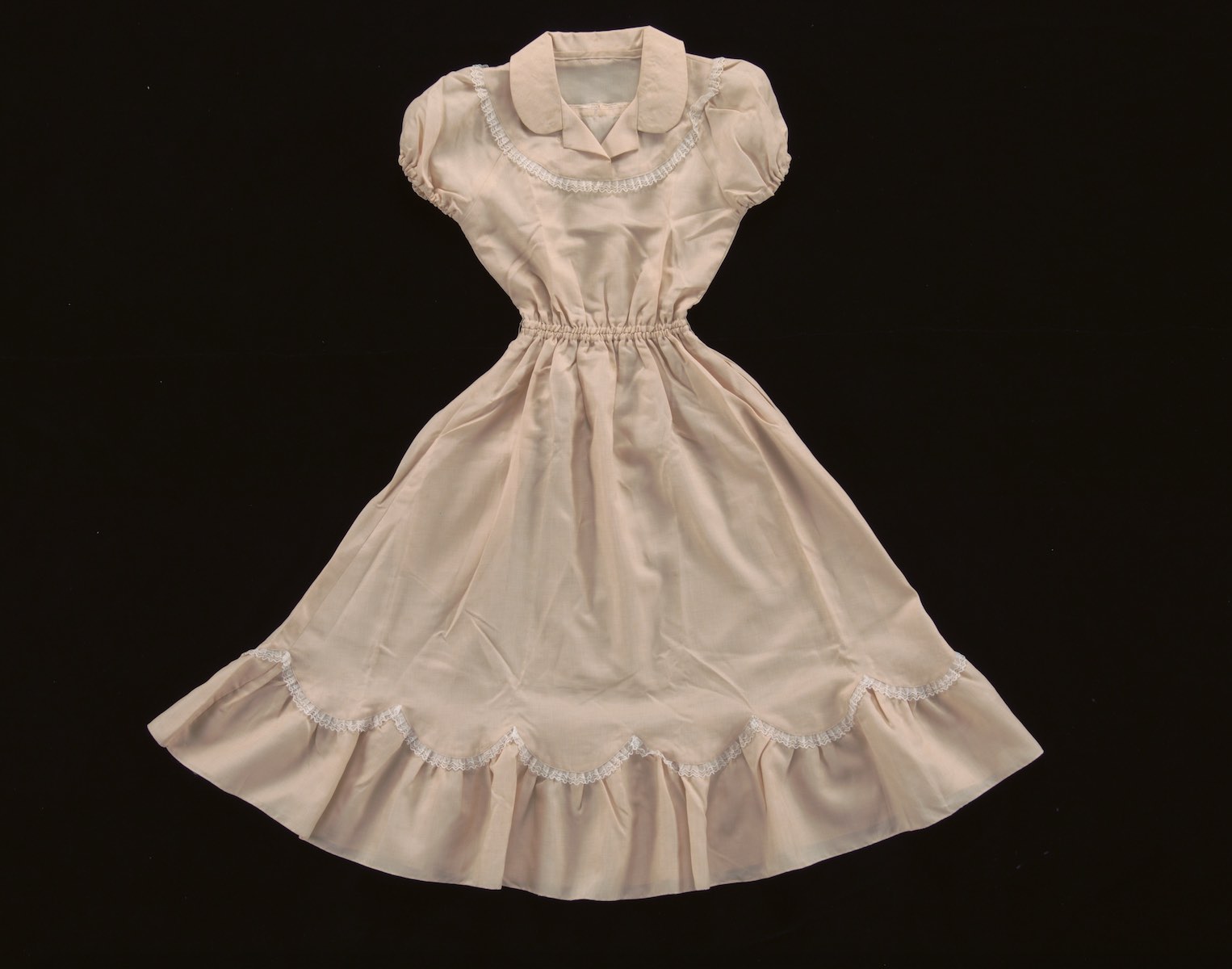 In the early days of independent Singapore, in order to address the issue of unemployment, the Singaporean government turned to export-oriented labour-intensive industries and successfully attracted investments through a slew of free and open economic policies.

In this photograph, the female workers are packaging the Japanese product, “Tancho Hair Cream”. They are spotting fashionably permed short hair which is a practical choice for working women at that time as such a hairstyle is relatively low-maintenance. The exhibition at SYSNMH will be open from 10am to 5pm from Tuesdays to Sundays (and closed on Mondays). Admission is free for Singaporeans and Permanent Residents. For more information on Modern Women of the Republic: Fashion and Change in China and Singapore, please visit sysnmh.org.sg. 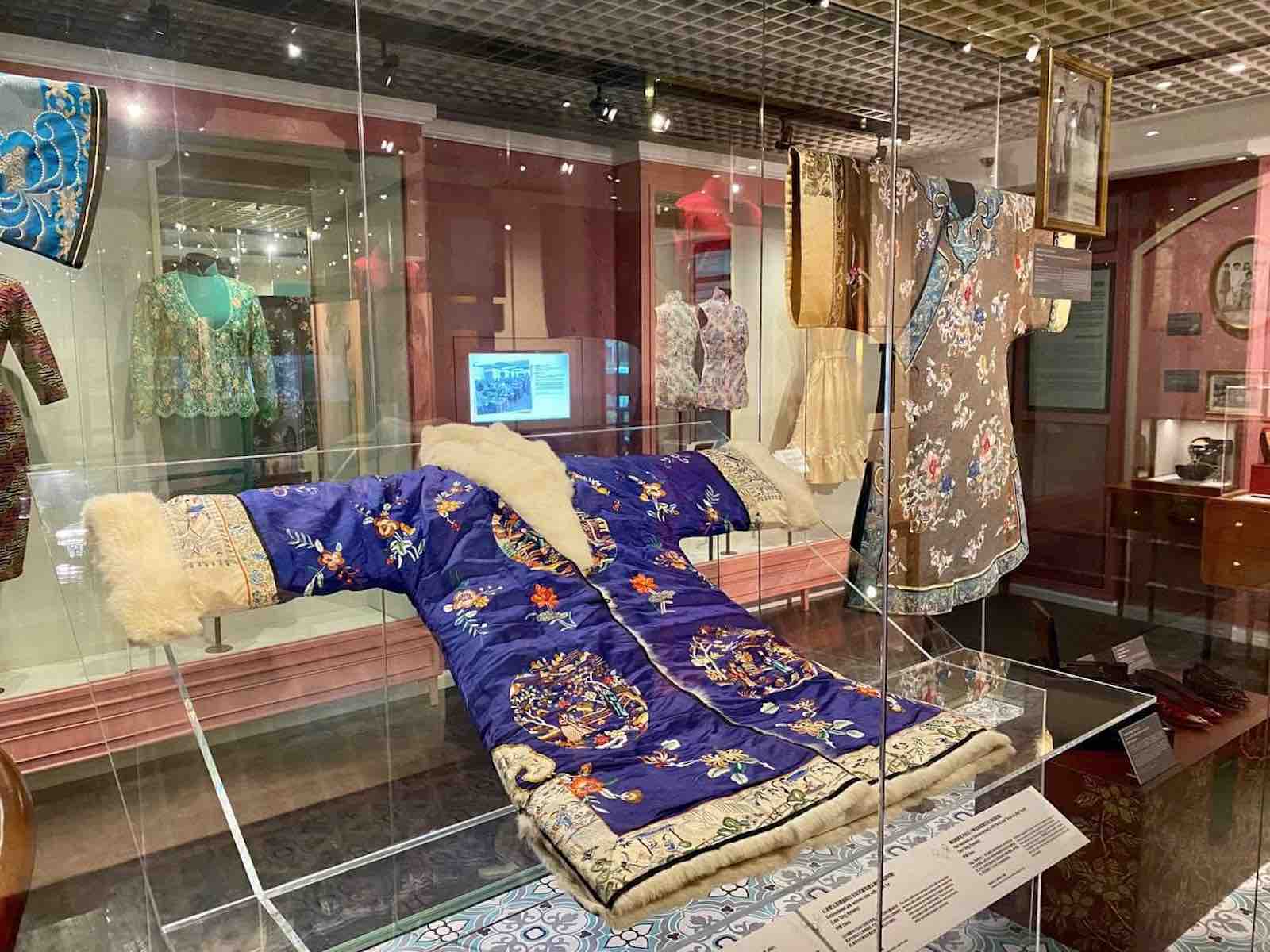