Regardless of whether you are a tourist or a resident here in Hong Kong, you would most probably have been to The Peak for the magnificent view, shopped at Tsim Sha Tsui, took the Star Ferry across the Victoria Harbour, meandered your way through swarms of people in Causeway Bay, visited the Wong Tai Sin temple and taken the Mid-levels escalator. So, what else is there to do in Hong Kong?

After staying here for almost 2 years, I cycled for the first time in Hong Kong at the end of March. I saw a very different side of the city and truly enjoyed it.

I joined a Meetup group for the cycling event and we gathered at the Tai Shui Hang MTR station. From there, the organisers brought us out through Exit B of the MTR station and walked about 5 minutes down the paved road to the Bicycle Park housing a few big bicycle rental companies. We were led to this shop (鸿运单车行61). The cost of the bicycle rental was very reasonable at HK$80 (we rented at around noon and returned before 6.30pm) which includes the “one-way charge” for dropping off the bikes at their Tai Mei Tuk branch. You could also request for a basket to be tied to the front of your bike if you wish but the shopkeepers don’t recommend that because they said that the basket might affect the brakes’ function. So it’s up to the individual’s choice.

After settling the logistics, we then set off to the Ma On Shan Promenade. The view from the Promenade was beautiful with the sea and mountains on our left. At around 12noon, the Promenade wasn’t that busy even though there were people jogging, strolling, walking their dogs and playing with their children. It felt refreshing to be in this environment with so much open space; very different from the congested and crowded streets of Hong Kong you normally see.

The weather was great, cool even though the sun was out. Everyone was cycling at different speed and I was just taking it slow, appreciating the surroundings. I believe I was smiling to myself during the whole ride along the Promenade as I was enjoying it so much.

The 2-lanes bicycle tracks were separated from the pedestrian footpath by a row of planters for safety sake. 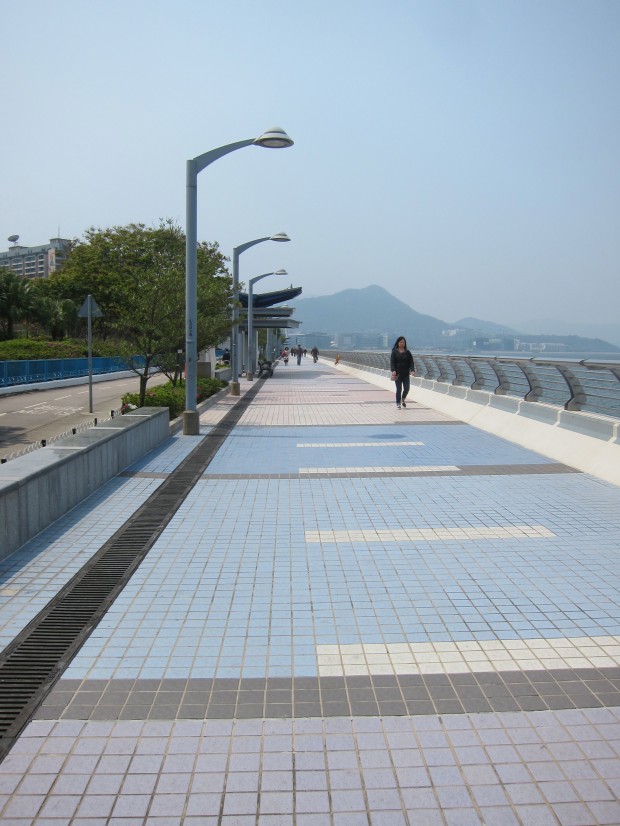 Interestingly, we saw a lot of laundry hung on the fences and railings along the Promenade. Apparently this is considered common in Hong Kong since their houses are usually quite small with inadequate space designed for them to dry their laundry. That’s the Hong Kong way of life I guess. 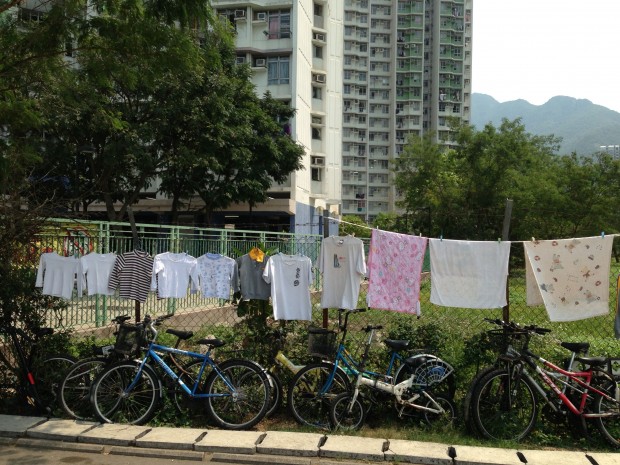 Once we reached the end of the bicycle track, we made a u-turn to go back to where we came from. After we rode past the opposite end of the Promenade, we took a right turn to cross the Shing Mun River going towards the Science Park. By this time, some of the residents probably finished their morning yum-cha and were out and about, enjoying the beautiful day alongside us.

After having our lunch at the Science Park’s food court, we slowly made our way towards Tai Mei Tuk, passing through the Tai Po Waterfront Park.

The organisers decided to try a new route, so we cut through the park and cycled onto the road inside the Tai Po industrial area (it was Saturday so the road was pretty quiet) before joining back to the Tin Kok Road where the Tai Po East Fire Station was. Slightly further ahead, we came to a relatively steep slope where almost everyone had to get down their bikes and push at some point. So don’t kick yourself if you can’t ride all the way up!

We also stopped at a fish farm where people can go ‘fishing’ by the pond. They also have a stall selling drinks and food including their specialty hand-made beancurd. I was too full and feeling too warm from the cycling to eat anything so I cannot comment on the beancurd. All I can say is it seemed to be popular among the customers.

Moving on, we finally reached Tai Mei Tuk where a row of low-rise housing and shops lined the bicycle track. It was getting crowded with other cyclists including families on trishaw-like transportation sharing the bicycle track and people getting to their BBQ sites. We continued on towards the Plover Cove Dam through the Tai Mei Tuk Road – warning: another steep upslope before you reach the Dam!

Everyone here at the 2km-long dam, which disconnects the Plover Cove Reservoir from the sea, was enjoying himself/herself, be it cycling, strolling or flying kites. The view of the sunset was beautiful despite the unimaginable amount of insect we walked / biked into along the Dam. Just don’t open your mouth and you will be all right!

It was a beautiful ending for a great day out. No wonder this cycling route is one of the most popular in Hong Kong!

Dariel Lim (@wheresdariel) is a Singaporean who lived in Dubai for 6 years before moving to Hong Kong in 2012. She had travelled to countries like Egypt, Lebanon, Kenya, Europe, etc. and shares her itineraries and stories on wheresdariel.com.