The influx of foreign talents into Singapore labour market has always been one of my top concerns. I believe the majority of our local PMEs (Professionals, Managers & Executives) view foreign talents as taking away their career opportunities in Singapore. Hence I jumped at the invitation for a Dialogue Session On Labour Market Testing and National Jobs Data Bank with Mr Patrick Tay, Director, NTUC Professional, Managers and Executives Alignment Unit (PME Unit).

The question of whether “Singaporeans First” or “Fair Consideration for Singaporeans” when it comes to employment opportunities was a hot topic during our discussion. Before you jump to conclusions, read on and slowly formulate your personal thoughts. As always, remember to share your thoughts in the comments section.

Challenges in the Singapore Labour Market

Mr Patrick Tay started the session by giving us an overview on the existing challenges faced by our island state. First and foremost, our government has not pre-determined a specific quantity restriction on employment passes, i.e. work passes for foreign professionals working in managerial, executive or specialised jobs, with a monthly salary of $3,000 and above.

This has given certain employers an unspoken mandate to bring in foreigners to fill up their staff strength. We can see clearly from the table above that the total foreign PME has increased 77% from 63,000 in 2006 to 112,000 in 2010. 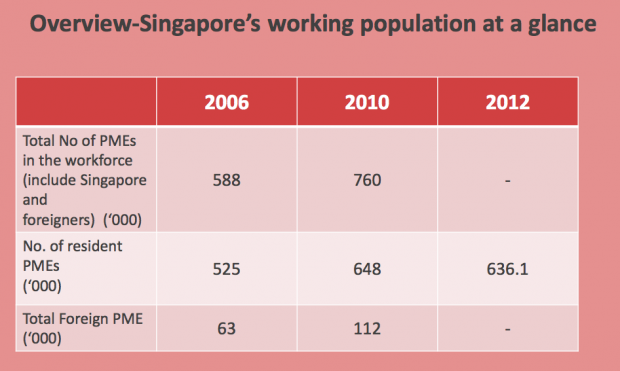 This is a shocking increase given only a relatively small 29% increase in total PME workforce. This means that almost one third of new PME roles created from 2006 to 2010 were filled by foreign PMEs. Our ratio of local to foreign PMEs has reduced drastically from 8.3 to 5.7. 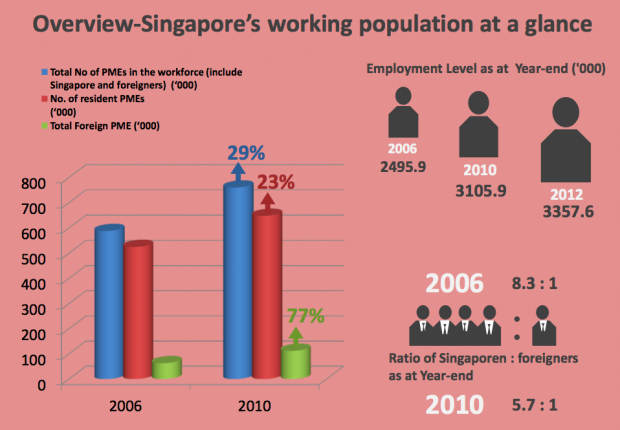 From the statistics, it is little wonder why the announcement of 6.9 million population white paper further fuelled the rising wave of anti-foreigner sentiment. Numerous stories of local PMETs (professionals, managers, executives, technicians) being replaced by foreigners spread like wild fire on the internet, and claims of cronyism and preferential hiring of fellow countrymen have stoked the embers of xenophobia in our otherwise multicultural island. These claims were not totally unfounded. The prevalence of foreign PMEs in the banking and information technology sectors is hard to hide under the carpet.

Last but not least, there is a rather serious situation of foreign PMEs undercutting the locals as the former are willing to do the same job for a much lower remuneration and benefits.

What Is Labour Market Testing?

Labour Market Testing (LMT) essentially requires companies or employers who want to recruit foreign labour into their pool, including PMEs, to test the local labour market first before being able to hire a foreigner.

One way which LMT can be implemented is for companies to first prove that they have exhausted all local sources – be it through advertising on mainstream media or employment agencies to the resident population, and failing to find a suitable local candidate – before they are given the green light to employ foreign PMEs.

This concept is not new and has already been adopted in various forms in many countries around the world including our neighbouring countries, Malaysia, Indonesia and Australia. 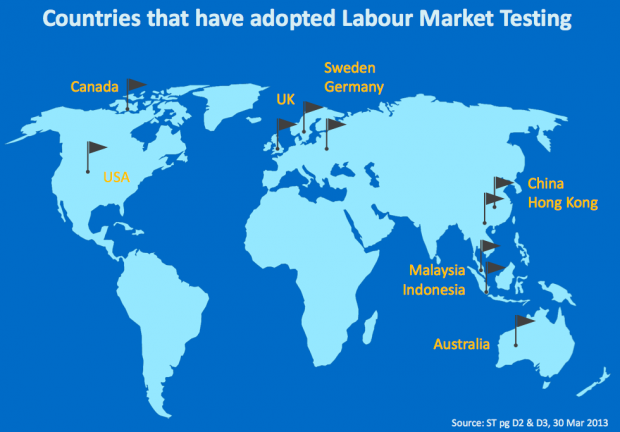 LMT may include a National Jobs Data Bank whose purpose is to provide an online platform that consolidates all available jobs in Singapore for the convenience of Singaporean jobseekers to allow them a head-start in the job application process. For example, an employer announces the career opportunity in National Jobs Data Bank for Singaporeans to apply. The announcement on public channels may be permitted 2 weeks or a month later.

The idea of LMT is not new to Singapore as Patrick Tay has been pushing for this initiative since 2011.

Rogue Hirers May Game The System

During the discussion, there was a general concern on the possibility of rogue hirers who creatively seek out policy loopholes to manipulate it to their advantage such that they can still bring in foreigners without breaking the law. Here are some of the possible ways to game the system:

Rogue hirers can simply craft an unappealing package in their job description to deter Singaporeans from applying and hence justifying why companies need to bring in foreigners for the job. It is critical that a remuneration range reference structure is put in place for hirers to adhere to.

Just like remuneration and benefits, the requirements in the job description may be worded to seem unappealing to Singaporeans so as to deter application. Upon hiring a foreigner, there may be an internal discussion to make amendments to the job description. It is extremely difficult to follow up and check if the actual job description applies after the hiring process. Even if the hirer is guilty of changing the job description, they can simply point it to change of management direction.

The hiring process is rather subjective. The rogue hirer may put on a show of interviewing a number of Singaporean applicants and eventually select none from the pool due to subjective reasons such as no suitable fit with the company culture or lack of suitable “experience”.

These are just 3 of the more obvious ways to game the system with other loopholes likely to be present as well.

Despite the potential loopholes in the system, LMT is one possible avenue to protect Singaporeans’ interests when it comes to job opportunity and security.

The other debate that surfaced during the discussion explored the extent of protection that we want LMT to achieve. Will it be better to have a “Singaporeans First” or “Fair Consideration for Singaporeans” policy?

“Singaporeans First” means that the employer needs to exhaust all means to hire a Singaporean (e.g. submitting the job posting onto the National Jobs Data Bank and thereafter on public domains, and submitting a detailed document stating why the hiring of a foreign is necessary and have it approved by Ministry Of Manpower before they can proceed to hire a foreigner).

“Fair Consideration for Singaporeans” puts both Singaporeans and foreigners on equal standing, although with no outright mandate to hire Singaporeans first if foreigners prove to be more competitive, this is to ensure that Singaporean candidates are given the opportunity to be assessed fairly by hirers (instead of Singaporean resumes being automatically tossed out the window).

I personally opted for “Singaporeans First” Policy. I personally feel that there is nothing wrong for the government to implement a stronger mandate for companies to hire our own citizens if they are able to fulfill the job scope.

A few participants in the discussion expressed their inclination for “Fair Consideration for Singaporeans”.  They are confident that Singaporeans are able to take on competition from foreign talents and have concerns that excessive protection may result in the further deterioration of our workforce competitiveness and worsen complacency among the younger generation.

So what’s your view? Are you for “Singaporean First” or “Fair Consideration for Singaporeans”?