History was made on 23 May 2013 as the first ever Social Star Awards shone a beaming light on the world of social media, wowing audiences in Singapore and across the globe with some of the most dynamic and unique set pieces and collaborations from the world’s biggest celebrities and internet sensations. Never before has there been a recognition and celebration of what the global social community like, follow, view, tweet and share each and every day and as the social sphere continues to grow, never has there been such great a need! 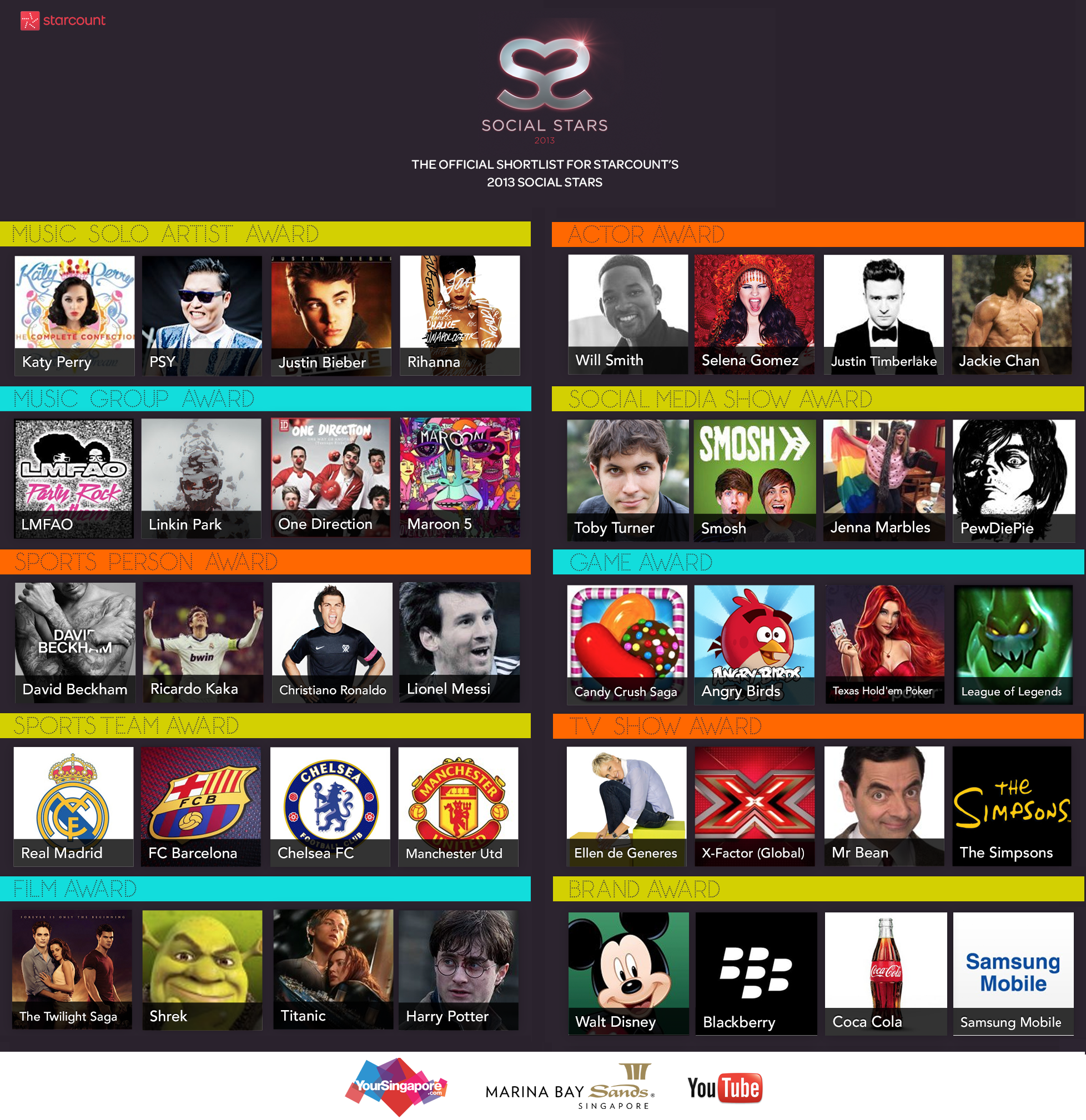 In an award show that dazzled and astounded social media fans assembled in Singapore’s Marina Bay Sands, as well as fans watching live on YouTube from across the globe, the very biggest awards were reserved for the most high profile social media stars in the world.  The live Social Star Awards were the pinnacle to an amazing 24 hours of virtual awards where stars from all over the world were recognized for their popularity in the world of social media.

The  night began with a bang as the Red Carpet was filled with the biggest YouTube stars of the past 12 months – Hikakin, Harlem  Shake, Tummy Talk, Marquese Scott , Ryan Higga and Wrecking Crew, PewDiePie and some of the world’s most famous stars including Aerosmith, PSY, Jermaine Jackson, George Takei, Carly Rae Jepsen and CeeLo Green.

The high octane awards kicked off with an opening performance from American Rock Legends Aerosmith who are set to wow Singapore this weekend with their first ever concert in the city.

They blew the roof of the theatre with blistering performances of their most iconic hits such as Crying and Don’t Want to Miss a Thing before performing an unforgettable rendition of the bands all time classic, Walk This Way with beat boxer Hikakin one of the most high profile and talented social media stars of 2013.

Not content with one world exclusive, the Social Star Awards presented yet another world first in the form of the very first Harlem Shake to be performed and broadcast LIVE on YouTube featuring the four original Harlem Shakers themselves.

Wrecking Crew perhaps gave one of the most unforgettable performances of the night. The illuminated body poppers who have amassed millions of YouTube views of their blistering dance routines, brought a brand new sequence to the Social Star Awards which left the audience speechless and will no doubt be another viral sensation in days tocome.

There were also stunning solo performances from Carly Rae Jepsen, Sky Blu, Eric Benet, Blush and PSY who closed the show with a sensational performance of the songand dance that propelled him to internet infamy, Gangnam Style.

Accepting their award via video link, One Direction said: ‘“We wanna say a massive thank you for the Best Social Star Group of the year award. Thank you for our Starcount award, and we will see you soon!”

On accepting his award, Justin Bieber, said: “Thank you to all my fans that helped me win best solo artist. You guys are awesome!’

Paul Morrison and Drew Thomson, Joint CEOs of Starcount said “What an unbelievable end to an incredible few days. When we first began planning the Social Star Awards we always wanted to make sure we were doing something different, something unique and that we were bringing something completely new to the table and after the amazing show tonight and seeing the success of the past 24 hours and the response from fans and stars it feels like we have achieved what we set out to do.”

Here’s what everyone is waiting for, our Social Star Awards 2013 Winners (listed in alphabetical order):

Most Popular Music Group: One Direction

& last but not least, the Almighty Award goes to Justin Bieber!

You may also like to check out my posts on other interesting social media topics here.