The metropolis of Bangkok was developed on the western bank of the Mae Nam Chao Phraya. That was then. Today the city, with a population of 15 million counting the greater metropolitan, has spewed across both sides of the river. The notoriety of Bangkok traffic congestion is legendary. Every visitor arriving at the Don Muang International Airport get an immediate taste of it – if they arrived during rush hour, then the speed on the highways is reduced to a crawl. From 28 September 2006, international air passengers to Bangkok will arrive at the sparkling new Suvarnabhumi International Airport. If it is your first time in the Thai Capital, we are here to share tips for exploring Bangkok. 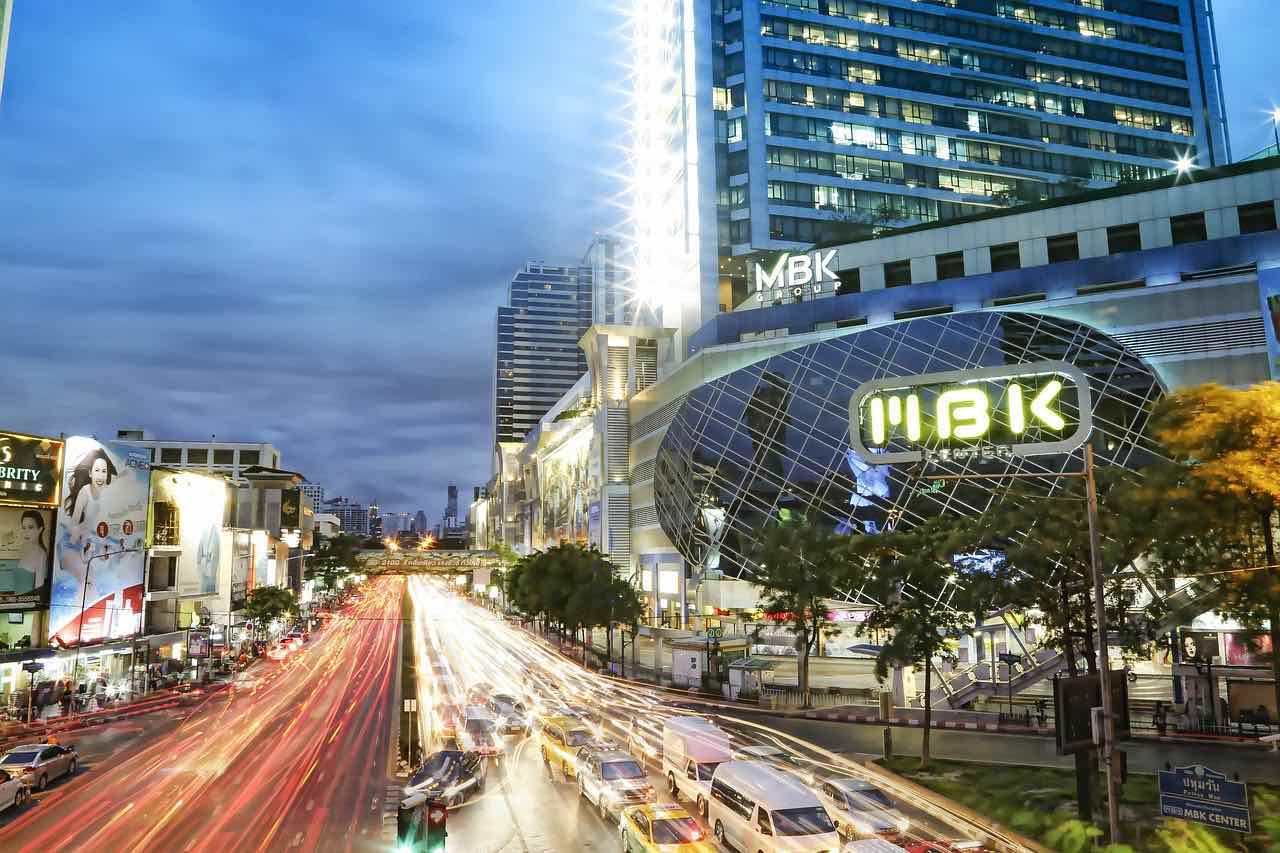 Bangkok is a modern, fast-paced metropolis

The name Bangkok means the City of Wild Plums. That’s not the usual name the Thai use to call the city. To them, it is Krung Thep, which means, City of Angels. But that is an abbreviation. The full name – which the Thais proudly proclaim as the longest name in the world – is Krungthepmahanakhon Amonrattanakosin Mahintharayutthaya Mahadilokphop Nopphosin Ratchathaniburirom Udomrathaniwetmahasa Amonphiman Awatansathit Sakkathatiya Witsanukamprasit. This massive mouthful, translated into English, goes something like this: City of Angels, Great City of the Immortals, Magnificent City of Nine Gems, Seat of the King, City of Royal Palaces, Home of the Gods Incarnate, Erected by Visvakarman at Indra’s Behest. There.

While the traffic jams are still there, the construction of several elevated expressways that make sweeping loops across the city has somehow reduced the misery of being caught in jams somewhat – not that it is eliminated. As soon as you leave the elevated expressways, you come down to earth to the grinding crawl.

What to See, Where to Go

There is much to see and do in Bangkok, according to each visitor’s inclination. We shall give you a run through to make your visit to Bangkok a more enlightening experience.

In addition to the highways, Bangkok now has an elevated mass transit system, called the BTS Skytrain, and a subway system, the Bangkok Metro. The Skytrain, in service since December 5, 1999, has 22 stations covering 23.5km. The Metro, delayed several times, was finally opened on April 13, 2004, with the Hua Lamphong – Bang Sue Route of 18 stations covering 20km. The two systems have interchanges at Silom/Saladaeng, Sukhumvit/Asok, and Chatuchak/Mo Chit.

Those who are keen to absorb a bit of Thai history – and that of Bangkok in particular – are recommended to head to Rattanakosin or the Old Royal City. This is the section of Bangkok where it all began. It is located on the banks of the Chao Phraya river. If you view it from the air, you will appreciate that Bangkok, like Ayutthaya before it, was built on a manmade island.

When General Chakri, who later became King Ramathibodi – and posthumously called Rama I – transferred his administrative capital from Thonburi across the river to the present site in 1782, he carved an island by digging canal – the Khlong Lot – across the bend of the Chao Phraya. As it was with Ayutthaya, water served as protection for the city. During the construction, he even brought bricks dismantled from the ruined Ayutthaya (which was just destroyed by the Burmese). This section of the city is today called Rattanakosin, and until 1932, it housed all the royal quarters.

Among the sights at Rattanakosin are the Grand Palace, which contains among others, Wat Phra Kaeo, or Temple of the Emerald Buddha, the golden Phra Si Ratana Chedi, and the Chakri Maha Prasad, the king’s audience hall. Next to the Grand Palace is Wat Po or Temple of the Reclining Buddha. North of the Grand Palace is Sanam Luang, or Royal Field, a circular-shaped lawn. This green space was a ready venue for mass protest, and unfortunately, the pro-democracy demonstrations of 1973, 1976 and 1992 resulted in massacres here.

West of Sanam Luang is Wat Mahathat, Temple of the Great Relic. This is a very common name for a Thai temple, and you will find many Wat Mahathats as you explore Thailand. The one in Bangkok is rather undistinguished, though it is Bangkok’s oldest shrine. Within here is the Buddhist University, one of only two in Thailand. During Buddhist holidays, Wat Mahathat is crowded with medicine vendors and stalls.

Next to Wat Mahathat is the National Museum, housing a find collection of Thai and Southeast Asian treasure. It comprises half a dozen old and new buildings, the oldest is Wang Na, dating from 1782. This was once part of the old palace. When his heir-apparent attempted to overthrow him, King Chulalongkorn had most of the old palace buildings torn down, and Wang Na was one of those left standing. It houses khon masks, gold and ceramics, weapons, musical instruments and an ivory howdah.    Bangkok Phra Si Ratana Chedi

Phra Si Ratana Chedi, one of the buildings in the Grand Palace complex.

A little further on the east is Wat Saket or the Golden Mount. Until 1960, this 256ft (78m) mount was still the tallest point in the city. Going the other way, one arrives at the Chao Phraya river. Across it is Wat Arun, the Temple of Dawn. One of Bangkok’s most distinctive landmarks, Wat Arun looks gorgeous during brilliant sunsets. It was named after Aruna, the Hindu god of dawn and its centrepiece is its 82-meter prang.

North of the old royal city of Rattanakosin is the quiet Dusit area. Wat Benchamabophit or Marble Temple is located here. Started by King Chulalongkorn in 1900, it is the last major temple to be built in Bangkok. Within its courtyard is a huge bodhi tree said to be derived from the same one from Buddha’s birthplace in India. Also in Dusit is Vimarnmek or Cloud Mansion. It is regarded as the world’s largest golden teakwood mansion. Used to house works of art, it is as much a treasure as the items within it. Built by King Chulalongkorn in 1900, the Vimarnmek shows how much the royal family was influenced by European culture and art in the late 19th and early 20th centuries.

Bangkok’s Chinatown is situated to the east of Rattanakosin, and south of Dusit. The Chinese merchants who lived here were relocated here when the Grand Palace was built in the 1780s.

This is one of the more exciting sections of Bangkok. Between the bustle of tuk-tuks and motorcycle taxis, there are banks, handicraft stores, restaurants and shopping malls. At night, you find night markets selling fake watches, jeans, t-shirts, and more. Silom Road takes you to one of the most notorious places in Bangkok, Patpong. Consisting of two streets Patpong I and Patpong II, this is where you find street vendors by day and adult entertainment by night.

Bangkok’s Central Business District is located at the intersection of Thanon Ratchadamri and Thanon Rama I. This is a very busy intersection, with Skytrain lines running overhead. Within a radius of one kilometer are most of Bangkok’s shopping malls and hotels. Thailand’s largest Central Department Store is located along Soi Chitlom nearby. For a concentration of handicraft shops – and prime prices – visit Narayana Phand, on Thanon Ratchadamri. On the opposite site of the same road is the World Trade Center. For international designer brands, head to Gaysorn Plaza, at the corner of Ratchadamri and Ploenchit. The Grand Hyatt Erawan is on the other side of Ploenchit. In front of it is the Erawan Shrine which draws believers offering thanks and seeking to improve their fortune. At the next intersection to the west is more shopping, with Siam Discovery Center on one corner and the Mahboonkrong or MBK Center on the other.

Going north along Thanon Ratchadamri takes you to Pratunam, where you find the tallest building in Thailand: the Baiyoke Sky Tower. Rising 88 stories, it is also presently the world’s tallest hotel.

Carol James is an EssayLab writer and senior editor. She has MA degree in social sciences and is an excellent specialist in this field. Moreover, Carol writes articles, reviews on the different actual subjects. So, if you have any questions regarding the writing, feel free to ask her!